Burnham is a large village and parish that lies north of the River Thames in southern Buckinghamshire, on the border with Berkshire, between the towns of Maidenhead and Slough, about 23 miles west of Charing Cross, London. It is served by Burnham railway station in the west of Slough on the main line between London Paddington and Reading. The M4 motorway passes through the south of the parish.

The toponym is derived from the Old English for "homestead on a stream".[2] It was first recorded in the Domesday Book of 1086 as Burneham, when the manor was held by Walter FitzOther.

Burnham was once a very important village. The road from London to Bath (now the A4) passed through the extensive parish of Burnham and as a result, in 1271, a Royal charter was granted to hold a market and an annual fair. However, when the bridge crossing the Thames in Maidenhead opened, the road was diverted away from Burnham, which fell into relative decline. The market was then transferred to Maidenhead.

Today the village is nearly contiguous with west Slough, though green-buffered by parkland. At the 2011 census the civil parish had a population of 11,630 and Burnham is the traditional village nucleus.[1]

The Church of England parish church of Saint Peter dates in part from the 12th century but has been substantially expanded, refurbished and altered, with major restorations in 1863–64 and 1891 and the construction of the Cornerstone Centre in 1986.[3]

In 1265 a Benedictine women's abbey was founded near the village by Richard, Earl of Cornwall. The community was dispersed under King Henry VIII in the Dissolution of the Monasteries. Since 1916, a contemplative order of Church of England Augustinian nuns has been based in the restored remains of the original abbey.

Burnham Grammar School and The E-ACT Burnham Park Academy provide secondary education to the children of Burnham and the surrounding area. Many students, however, commute to the nearby secondary schools in Slough. Priory School is the largest primary school in the area and provides primary education for many of the local children, although the smaller "Our Lady of Peace" Roman Catholic primary school is next to Priory School. 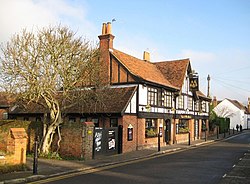 There are four pubs on Burnham's High Street, with two more on the adjacent Church Street and Britwell Road.[4]

Burnham Football Club is a Non-League football team that plays at The Gore.

Burnham has a Local nature reserve on the eastern border of the village called Haymill Valley.[5]

Burnham Beeches National Nature Reserve, an area of 540 acres of protected ancient woodland, lies just north of the village. Owing to its proximity to Pinewood Film & TV Studios, Burnham and its surrounding areas (in particular Burnham Beeches) feature in films, notably main scenes in Carry On films and for the 1991 film Robin Hood: Prince of Thieves.

The major National Trust estate of Cliveden is about three miles north-west, in the neighbouring parish of Taplow. Dorneywood, currently the country home of the UK Chancellor of the Exchequer, is in Burnham parish.

The village has very good transport links. In addition to Burnham railway station (future Crossrail) and the nearby M4, the Chiltern Main Line and the M40 are accessible about four miles north at Beaconsfield. Heathrow Airport is about eight miles east.