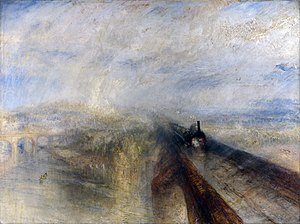 Maidenhead Railway Bridge depicted by Turner in a painting from 1844 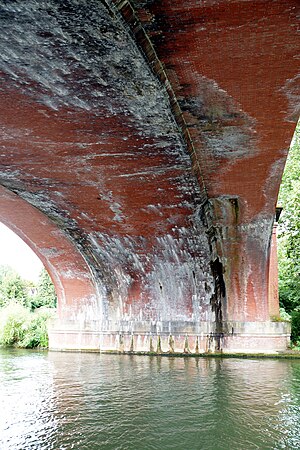 The echoing 'Sounding Arch' from the bank

Maidenhead Railway Bridge (aka Maidenhead Viaduct, The Sounding Arch) is a railway bridge carrying the main line of the Great Western Railway over the River Thames between Maidenhead, Berkshire and Taplow, Buckinghamshire. It crosses the Thames on the reach between Bray Lock and Boulter's Lock at the downstream end of Guards Club Island.

Maidenhead Railway Bridge features in Rain, Steam and Speed – The Great Western Railway, painted by Turner in 1844 and now in the National Gallery, London.

The bridge was designed by the Great Western's engineer, Isambard Kingdom Brunel, and it was completed in 1838, but not brought into use until 1 July 1839.[1] Brunel's first plan envisaged a triple-arch viaduct, but he then developed the design that is still used today.[2] It was inspired by experiments made by his father, Marc Brunel in 1832 which Isambard had at the time financed.[3] The railway is carried across the river on two elliptical brick arches, which at the time of building were the widest and flattest in the world.[4][5] Each span is 128 feet, with a rise of only 24 feet. The flatness of the arches was necessary to avoid putting a "hump" in the bridge, which would have gone against Brunel's obsession with flat, gentle gradients (1 in 1,320 on this stretch).[4][5][6] The Thames towpath passes under the right-hand arch (facing upstream), which is also known as the Sounding Arch, because of its spectacular echo.

It has been claimed that the board of the Great Western Railway did not believe that the arches would stay up under the weight of the trains and ordered Brunel to leave the wooden formwork used to construct the arches in place. However, Brunel simply lowered the formwork slightly so that it had no structural effect, but appeared to be in place. Later, when the formwork was washed away in floods, but the bridge remained, the strength of the arches was accepted.[1]

As built and opened on 1 July 1839, the bridge carried two seven-foot railway tracks. In due course traffic to and from London increased enormously, and mixed gauge tracks were provided between London and Bristol during 1861. In anticipation of the final conversion to the standard rail gauge, during 1890–1892 the bridge was widened on each side to carry four standard gauge tracks. This work was carried out under the supervision of Sir John Fowler, the width overall being increased from 30 ft to 57 ft 3 in. However, this was undertaken so sympathetically that the outward appearance of the bridge remained almost unaltered.[7]

In July 2012, the Maidenhead Railway Bridge was upgraded to Grade I listed status by the Department for Culture, Media and Sport following a consultation with English Heritage.[8][9]

The forthcoming Crossrail development will see the long-delayed overhead electrification of the Great Western line. This construction work had been set to require a temporary construction depot to be created immediately next to the bridge in Guards Club Park on the Berkshire side of the bridge, but this decision has subsequently been reversed, though the bridge itself will obviously still undergo some changes to accommodate the Overhead line equipment. The Crossrail Environmental Statement[10] states:

The possibility of using third rail electrification on the bridge was considered but rejected.[11]