Hanwell is a town in Middlesex, within the metropolitan conurbation between Ealing and Southall.

The earliest surviving reference to Hanwell is in 959, when it is recorded as Hanewelle in pledge by which Aelfwyn pawned the land for money to go on a pilgrimage. The origin of the name is uncertain; various suggestions have been put forward. It may mean "Cock's Well" or han is an occasional word for a boundary stone: near the old Rectory and close to Hanwell spring is a large stone of about a ton in weight which might bfit that suggestion.

St Mary's Church is the original parish church. The present church was built in 1841 by George Gilbert Scott in the Gothic Revival style; on of Scott's earliest works.[1] It stands on the site of an earlier church.

A memorial stands here to perhaps the most famous rector; Dr George H Glasse. The home he had built for him nearby in 1809, in the cottage orné style, name "The Hermitage", which Nikolaus Pevsner described as "a peach of an early c19 Gothic thatched cottage with two pointed windows, a quatrefoil, and an ogee arched door, all on a minute scale. Inside, an octagonal hall and reception room".[2]

The Beating the Bounds ceremony is held on the May Bank Holiday, to remind all those who do dwell in these parts, where the Parish of Hanwell's boundaries lay; all-comers are invited to go beating the bounds.[3][4]

A small beer festival is held each Easter weekend down at the far end of Green Lane at The Fox Pub which features about two-dozen cask beers from chosen around the country.[5] 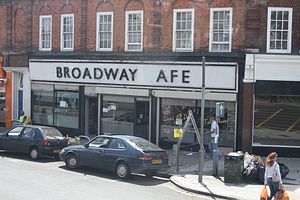 "The Broadway Cafe" in There for Me

Hanwell has been the filming location for a number of films and television programmes:

And I remember that as I lifted my head to listen, my eye caught an omnibus on which was written "Hanwell".... "Believing utterly in one's self is a hysterical and superstitious belief like believing in Joanna Southcote: the man who has it has 'Hanwell' written on his face as plain as it is written on that omnibus.[6]

So, setting about it as methodically as men might smoke out a wasps' nest, the Martians spread this strange stifling vapour over the Londonward country. The horns of the crescent slowly moved apart, until at last they formed a line from Hanwell to Coombe and Malden.[7]