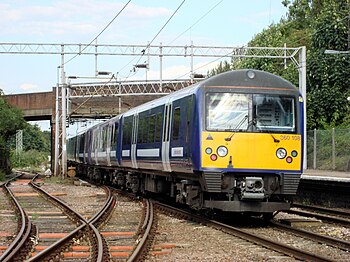 The Great Eastern Main Line (GEML, sometimes referred to as the East Anglia Main Line) is a 114½-mile major railway line on the British railway system which connects Liverpool Street station in London with destinations to the east, including Shenfield, Chelmsford, Colchester, Ipswich, and Norwich. Its numerous branches also connect the main line to Southminster, Braintree, Sudbury, Harwich, and a number of coastal towns including Southend-on-Sea, Clacton-on-Sea, Walton-on-the-Naze and Lowestoft.[1]

Its main users are commuters travelling to and from London, particularly the City of London which is served by Liverpool Street, and areas in east London including the Docklands financial district via the London Underground and Docklands Light Railway connections at Stratford. The line is also heavily used by leisure travellers, as it and its branches serve a number of seaside resorts, shopping areas and countryside destinations. The route also provides the main artery for substantial freight traffic to and from Felixstowe and Harwich via their respective branch lines. Trains from Southend Airport also run into London via the GEML.[2]

The first section of the line, built by the Eastern Counties Railway (ECR), opened in June 1839 between a short-lived temporary terminus at Devonshire Street in the East End of London and Romford in Essex. The London terminus was moved in July 1840 to Shoreditch (later renamed Bishopsgate) in Bethnal Green, and at the eastern end the line was extended six miles out to Brentwood in the same year. A further 34 milrd of track was added out to Colchester by 1843.[3] The original gauge for the line was 5ft, but this was converted to standard gauge in 1844.

The section of line between Colchester and Ipswich was built by the Eastern Union Railway (EUR) to standard gauge and opened to passenger traffic in June 1846. Its sister company, the Ipswich and Bury Railway, built a line to Bury St Edmunds and this was completed in November 1846. Both companies shared the same office, many directors and key staff, and started operating as a unified company with the EUR name from 1 January 1847. An extension from a new junction at Haughley to Norwich Victoria opened in December 1849, although the position of the latter station was poor and a spur to allow some trains to operate into Norwich (Thorpe) station was opened to regular traffic in November 1851.[4]

In the late 19th century the double-track main line was expanded with additional tracks being added to cope with more traffic. In 1854 a third track was added between Bow junction and Stratford to help accommodate London, Tilbury and Southend Railway services which at that time were operating via Stratford.

Until 1860 trains serving the town of Ipswich used a station called Ipswich Stoke Hill which was located south of the Stoke tunnel. The town's current station is located to the north of the tunnel.

The ECR had leased the EUR from 1854 but by the 1860s the railways in East Anglia were in financial trouble and most were leased to the ECR; they wished to amalgamate formally, but could not obtain government agreement for this until 1862, when the Great Eastern Railway (GER) was formed out of the consolidation.[5]

By the 1870s suburbia in the Forest Gate area was developing quickly and in 1872 suburban trains (this was the first distinctive suburban service on the main line as previously main line trains had performed this duty) terminated at a bay platform at Forest Gate. These were followed by trains from Fenchurch Street[Note 1] in 1877. By 1882 these services had been extended and were terminating at Ilford, Romford or Brentwood.

In 1877 a fourth track was added between Bow junction and Stratford and two goods-only tracks were added between Stratford and Maryland Point. The four-track Bow junction to Stratford section was extended back to James Street junction (near Globe Road station which opened the same year) in 1884 but Bethnal Green to James Street did not follow until 1891. It was also in this year that two extra tracks were added between Bethnal Green and Liverpool Street which were for the use of West Anglia Main Line services. These tracks were built through the basement warehousing associated with Bishopsgate station located above.

In 1902 the quadruple track was extended from Seven Kings to Romford, but it wasn’t until 1913 that four-tracking out to Shenfield was suggested and the First World War caused delay to this plan.[6] In 1903 the Fairlop Loop opened and a number of services that had previously terminated at Ilford were extended onto it. These services generally looped round and back to the GEML at Stratford (on the Cambridge line platforms).

The GER was grouped in 1923 into the London and North Eastern Railway (LNER). In 1931/32 the LNER quadrupled the tracks to Shenfield which became the terminus for inner-suburban operation.

In the 1930s a flyover was constructed just west of Ilford to switch the main and electric lines over, to enable main line trains to utilise Liverpool Street's longer west side platforms without having to cross east side suburban traffic in the station throat. The new arrangement also facilitated cross-platform interchange with the Central line at Stratford, with services commencing in 1946. Either side of the Ilford flyover there are single-track connections between each pair of lines, with the westbound track extending to Manor Park and just beyond. The eastbound track extends as far as Ilford station. It was also envisaged that a flyover would be built at the country-end of the carriage sidings at Gidea Park to allow trains bound for the Southend line to change from the main line to the electric line, instead of at the London-end of Shenfield as they do now.

Plans were drawn up in the 1930s to electrify the suburban lines from Liverpool Street to Shenfield at 1,500 V DC and work was started on implementing this. However, the outbreak of the Second World War brought the project to a temporary halt and it was not until 1949 that the scheme was completed with electrification being extended to Chelmsford in 1956.[7]

After nationalisation in 1948 the GEML formed part of the Eastern Region of British Railways. The British Railways 1955 Modernisation Plan called for overhead line systems in Great Britain to be standardised at 25 kV AC. However, due to low clearances under bridges the route was electrified at 6.25 kV AC. The section between Liverpool Street and Southend Victoria was completed in November 1960. Extensive testing showed that smaller electrical clearances could be tolerated for the 25 kV system than originally thought necessary. As a result, it was now possible to increase the voltage without having to either raise bridges or lower the tracks along the route to obtain larger clearances. The route between Liverpool Street and Southend Victoria was converted to 25 kV AC between 1976 and 1980.[8] Electrification was extended to Colchester in the late 1950s and finally to Norwich by 1986.

In 1986 the line as far as Manningtree became part of Network SouthEast (although some NSE services actually terminated at Ipswich) whilst longer-distance Norwich services were operated by InterCity. Local services operating from the Ipswich and Norwich areas were operated by Regional Railways.

The first signal box to be closed and transferred to Liverpool Street IECC was Shenfield in 1992, which had only opened 10 years earlier. The last boxes to be transferred were at Romford and Gidea Park in 1998, and were the oldest of those being transferred, having been opened under the GER/LNER 1924 resignalling scheme.

In 2011 the Docklands Light Railway was extended from Canning Town to Stratford and Stratford International. It uses the former North London Line alignment that runs beside the Jubilee line and directly links Stratford on the GEML to its international counterpart as well as local stations to the south and existing DLR branches in the Royal Docks.

The line is owned and maintained by Network Rail.[2] It is part of Network Rail Strategic Route 7, is composed of SRSs 07.01, 07.02 and 07.03, and is classified as a primary line. The GEML has a loading gauge of W10 between Liverpool Street and Haughley Junction (approximately one mile north of Ipswich) and from there is W9 to Norwich. The maximum line speed is 100 mph.[9]

Between Romford and Chadwell Heath there is a Network Rail maintenance depot adjacent to the Jutsums Lane overbridge. In addition at the London-end of the depot is Network Rail's Electrical Control Room that controls the supply and switching of the overhead line system for the whole of the former Anglia Region.

Signalling is controlled by two main signalling centres, Liverpool Street IECC (opened in 1992) and Colchester PSB (opened in December 1983). Liverpool Street IECC controls signalling up to Marks Tey, where it fringes with Colchester PSB, which has control to Norwich. There are also several small signal boxes that control local infrastructure, such as Ingatestone box, which has jurisdiction over several local level crossings.

On leaving Liverpool Street, the route comprises two pairs of tracks, known as the mains and the electrics, with a further pair of tracks, the suburbans, which carry the West Anglia Main Line alongside the GEML to Bethnal Green.

From Bethnal Green the GEML has four lines to Bow junction, where there is a complex set of switches and crossings. A line from the LTS (Fenchurch Street) route joins the "up" (London-bound) electric and there are a further two lines, the "up" and "down" Temple Mills, giving access to the North London Line and Temple Mills. The GEML is six tracks up to the London-end of Stratford and the junction to Temple Mills, and there are five lines through the station dropping to four at the country end.

At Shenfield the line to Southend Victoria diverges and the main line route drops from four lines to two; this arrangement continues for the vast majority of the way to Norwich. There are several locations where the route has more than two lines, predominantly through stations such as Colchester and Ipswich, along with goods loops, such as at the London end of Ingatestone.

The only tunnel on the line is just to the south of Ipswich. The 361-yd-long tunnel was built by Peter Bruff as part of the Ipswich & Bury Railway. It was completed in 1846 and it is thought to be the earliest driven on a sharp continuous curve.[10] During the excavation of the tunnel many important fossils were discovered, including rhinoceros, lion, and, mammoth; the site was known as the "Stoke Bone Beds".[11] The finds are considered important in understanding climate change during the Ice Age.[12] This tunnel had the trackbed lowered so the line could accommodate taller freight trains.

A high-frequency service operates on the electric line (referred to as the Shenfield Metro) between Liverpool Street and Shenfield, serving all intermediate stations, which is currently operated by TfL Rail. The off-peak service consists of six trains per hour with some additional services during peak times.[2] Some peak trains are scheduled to start or terminate at Gidea Park or |Ilford instead of Shenfield. The electric line is also used by limited services extending to and from Southend Victoria or Southminster.[2]