Weybridge is a town in Surrey, in the north of the county and bounded to the north by the River Thames at the mouth of the River Wey, from which it takes its name. It is a suburbanised small town in the London commuter belt and in 2008 it was calculated that of the ten most expensive streets in South East England (outside the conurbation), six were in Weybridge.[1]

Weybridge is made up of a number of distinct areas: town centre shopping area, Monument Hill / Queens Road shopping area, St George's Hill, Brooklands and Oatlands Village. The war memorial stands at the top of Monument hill, beside the cricket pitch, though the name Monumnet Hil predates it, referring to the monument to the Duchess of York erected at the bottom of the hill in 1820.

The town is in the Elmbridge Hundred.

Weybridge appears in Domesday Book of 1086 as Webrige and Webruge. It was held partly by Chertsey Abbey; partly by an Englishman from the abbey; and partly by Herfrid from the Bishop of Bayeux. Its Domesday assets were: 6 hides; 1½ ploughs, 32 acres of meadow, wood worth 9 hogs. It rendered £4.[2] 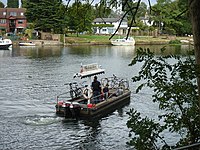 The early history of Weybridge was simply as a river crossing. In 1537 it became the location of Oatlands Palace built by Henry VIII, and which was where he married his 5th wife, Catherine Howard. When it was demolished in 1650, bricks from its walls helped to line the then new Wey Navigation canal. Part of the original site of the Palace is now occupied by Oatlands Park Hotel.

St George's Hill was the site of the Diggers' Commune in the 1640s.

At the bottom of Monument Hill, close to the town centre is a monument to the Duchess of York, erected by public subscription in 1820 from the remains of the original Seven Dials Monument that stood in St. Martin's Lane, London until 1773. The Duchess is buried in St. James's Churchyard.

The world's first leisure campsite was set up near Weybridge in 1901 and was part of the early history of the Camping and Caravanning Club.

Weybridge railway station was opened by the London and Southampton Railway in 1838. After the station was opened, development of what was up until then only a village began. Large houses were built on St George's Hill from 1911 by local builder & developer Walter George Tarrant of Byfleet and gradually Weybridge became a town. 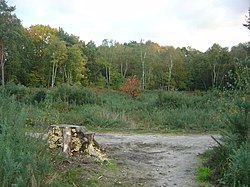 On Weybridge Heath, many rare species of insects (particularly ants), rare birds and insectivorous plant formerly occurred. The heath was allowed to become vastly overgrown in recent years, but recently Surrey Wildlife Trust invoked a scrub clearance plan in an attempt to restore this valuable habitat.

The cricket green is spreads out at the top of the hill, a perfect village cricket pitch in the midst of the town.

The famous former Brooklands Aerodrome and Motor Circuit is located between Weybridge and Byfleet and is now the location of the Brooklands Museum. The brainchild of Hugh Locke-King, Brooklands was opened on 17 June 1907 and was the first purpose-built motor racing circuit in the world. Its unique kidney-shaped layout was designed by Colonel H C Holden of the Royal Engineers and featured two steep and distinctive banked sections at opposite ends. Soon after it opened, the sheltered private location attracted early aviators and aeroplane designers such as Roe and Sopwith and the centre of the track soon became one of Britain's first aerodromes and later played a major part in aviation worldwide during much of the 20th century, most notably with the British Aerospace, British Aircraft Corporation, Hawker, Sopwith and Vickers aircraft companies.