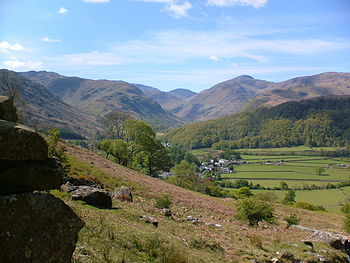 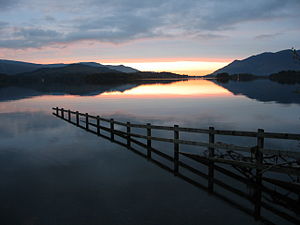 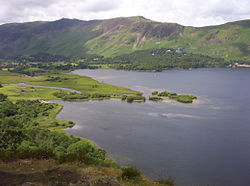 Borrowdale is a valley in Cumberland, amongst the Lake District fells. It is sometimes referred to as Cumberland Borrowdale in order to distinguish it from another Borrowdale across in Westmorland.

The valley rises in the central Lake District and runs north carrying the River Derwent into Derwent Water. The B5289 road runs down the full length of the valley, and at the southern end crosses the Honister Pass to Buttermere.

The waters of the Derwent flow from becks spread over a wide area of the central massif of the Lake District north of Esk Hause and Stake Pass, including those draining the northern end of Scafell, including Great End, the eastern side of the Dale Head massif, the western part of the Central Fells and all the Glaramara ridge.

Near Rosthwaite the side valley of Langstrath joins the main valley from Seathwaite before the combined waters negotiate the narrow gap known as the Jaws of Borrowdale. Here it is flanked by the rocky crags of Castle Crag and Grange Fell. The valley then opens out around Grange before the river empties into Derwent Water, overlooked by Catbells, Skiddaw and Walla Crag.

The valley lends its name to the Borrowdale Volcanic Group, a geological development from the Ordovician period. This rock makes up most of the mountains at the head of Borrowdale, including Scafell Pike and Great Gable.

The valley is a very popular tourist location, with hotels, guesthouses, holiday cottages, bed and breakfasts, youth hostels and campsites, catering for the lowland visitor as well as the hill-walker who can choose from a very wide range of popular mountains, including all the above-mentioned fells as well as Lakland's highest, Scafell Pike.

Some time before 1565 (some sources say as early as 1500), an enormous deposit of graphite was discovered near the Seathwaite hamlet in Borrowdale parish.[1] The locals found that it was very useful for marking sheep. This particular deposit of graphite was extremely pure and solid and it could easily be sawn into sticks, and so the pencil industry was born in nearby Keswick. This was and remains the only deposit of graphite ever found in this solid form.[2][3][4][5][6]

In the first of Hugh Walpole's series of four novels about the Herries family, Rogue Herries, Borrowdale is the site of a fictional house called Herries, the home of Francis Herries, the protagonist of this novel. Subsequent novels in the series are also largely set in Borrowdale. The valley and its surrounding mountains are described in sympathetic detail. Walpole himself had a house at Catbells overlooking Derwent Water from 1924 until his death in 1941.