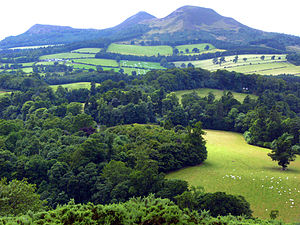 Site of Trimontium with the Eildon Hills behind

Trimontium was a Roman fort at what is now Newstead, near Melrose, in Roxburghshire. It stood between the three Eildon Hills and the River Tweed. The name of the fort means "Three Hills" (trium montium) after the three peaks of the Eildons.

The fort was an advance post of the Romans beyond Hadrian's Wall, and when the Romans advanced to the Antonine Wall it stood within the new province of Valentia; the land between the walls. Trimontium was occupied by the Romans intermittently from 80 to 211. At the height of the Roman occupation of the fort, no more than 1500 soldiers and a smaller civilian population lived in the settlement.[1]

Monument marking the site of Trimontium

In addition to the standard Roman defences and fort, which include a Roman bath and mansio built during a major expansion in 86 AD, the Romans built other structures.[2] Chief amongst these was an amphitheatre excavated in 1996, which could have held between 1000-2000 people, smaller than many other Romano-British amphitheatres.[1]

The main road to the fort led directly west from the main fort. An additional north-south road ran along the outskirts of the fort.[2]

Excavations by James Curle between February 1905 and September 1910 began the first exploration of the site, making many findings.[1] These include the foundations of several successive forts, one above the other, which throw much light on the character of the Roman military post; an unparalleled collection of Roman armour, including ornate cavalry parade (or 'sports') helmets (Newstead Helmet), horse fittings including bronze saddleplates and studded leather chamfrons, a good series of Roman coins and some datable pottery. The whole illustrates the history of the Roman army and that of the Roman military occupation of southern Scotland very remarkably. The cavalry unit stationed at Trimontium, ala Augustae Vocontiorum had been raised among the Vocontii of southern Gaul.

Additional ditches were dug in 1947, which defined the defences of the central fort. Between 1989 and 1993, the Newstead Research Project made further excavations with the support of the Department of Archaeological Sciences at the University of Bradford. The University of Bedford did another excavation and a geophysical survey on the site in 1996, focusing on annexes beyond the central fort.[1]

The many finds from Trimontium are on display at the Museum of Scotland in Edinburgh. There is also a museum run by the Trimontium Trust at Melrose.

In Rosemary Sutcliff's novel The Eagle of the Ninth, while the characters Marcus and Esca are travelling through Valentia in search of the lost Eagle of the Ninth Legion, they spend a night in the fort, and it is described in this context.[3]