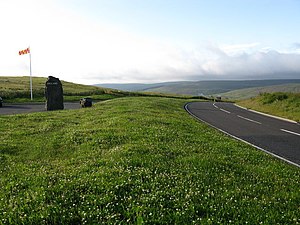 The A68 through Carter Bar

Carter Bar is the head of the pass over the Cheviot Hills and the point at which the A68 crosses the border between Northumberland to the south and Roxburghshire to the north. Consequently, it is, for such a remote, bleak location, well supplied with signs, flags and hot-dog vans celebrating a crossing between England and Scotland.

The pass is at the top of Redesdale in the Cheviots, on the north-east flank of Carter Fell, at an elevation of 1,371 ft above sea level. The first sizeable town to the north is Jedburgh, approximately 12 miles north of here. To the south, the nearest village is Byrness, then Redesdale, with Otterburn the next of any size. The A696 and A68 combine to form one of the main routes (and a popular scenic tourist route) between Newcastle upon Tyne and Edinburgh.

In 1575 Carter Bar was the scene of the Raid of the Redeswire, one of the last large-scale battles between armies of Englishmen and Scots.

Carter Bar was the location of Truce days that were held between the Lord Wardens of the Marches of both kingdoms to dispense cross-border justice in the Late Middle Ages and Early modern period. Truce days were also held at Carlisle and Berwick-upon-Tweed.

Carter Bar forms a popular point for tourists to stop and take photographs on the England-Scotland boundary. There are two marker stones on either side of the A68 for this purpose, the original stone created by local stonemason, Edy Laub. Upper Redesdale, the Tweed Valley and even Peeblesshire are visible from Carter Bar, and the Cheviot Hills loom all around. However, its altitude means snow is possible even in late spring and early autumn, and the Carter Bar pass can be subject to frequent snow-related closures during the winter. 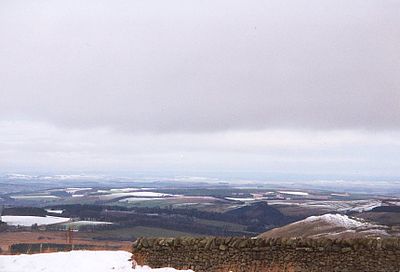