From Wikishire
(Redirected from Leader Water)
Jump to: navigation, search 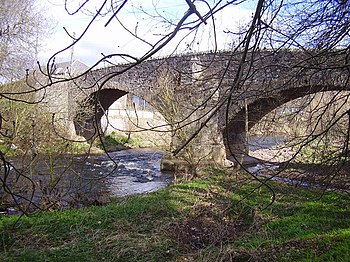 The Leader at Earlston

The River Leader, or Leader Water, is a small tributary of the River Tweed in Lauderdale in Berwickshire. It flows southwards from the Lammermuir Hills through the towns of Lauder and Earlston, joining the River Tweed at Leaderfoot.

The river gives its name to one of the famous of valleys of the Middle Shires: Lauderdale, which it carves in beautiful wooded scenery.

The feeder burns of the Leader Water are the Headshaw Burn, the Hillhouse Burn and the Kelphope Burn, all rising on Lammermuir. They combine at the Carfrae mill hotel and the village of Oxton, from which the river is named the Leader, and from here it flows southwards through Lauderdale. Below Oxton, the dale is followed by the A68 and the A697 either side of the river, and soon the Leader absorbs the Cleekhimin Burn, Harry Burn, Washing Burn and Earnscleugh Burn.

Still on Lammermuir, though now in a broad vale, the Leader reaches the town of Lauder, the main town of the dale, passing to the east of the town by Thirlestane Castle, and here receiving the Lauder Burn from the southwest the Earnscleugh Water coming out of Edgarhope.

Below Lauder the A679 bridges the river, and the river continues southwards past Lauder Barns, West Mains and St. Leonards where the Leader receives its final feeder burn, the Boondreigh Burn.

Having swallowed the Boondreigh Burn, the Leader is followed close by its shore by the A68 road south down the dale from Edinburgh, near the Whitslaid Tower, and on to the Blainslies, Galadean, Birkhill, Chapel-on-Leader and Leadervale, then to pass through the outskirts of Earlston.

Below Earlston the river is in its final reach. It skirts woodland down to Drygrange, and at last the Leader Water joins the River Tweed at Leaderfoot.

The meeting of the rivers is one of the fairest stretches of the Tweed. Near here are found Scott's View, Bemersyde House, Bemersyde Moss, Carolside, Dryburgh Abbey, the William Wallace Statue and the Roman forts at Newstead (Trimontium).

Lauderdale is a long, narrow valley in Berwickshire formed by the River Leader. It is traversed from end to end by the A68 trunk road which terminates at Edinburgh.

The dale was well known in old Northumbrian chronicles; according to Simeon of Durham, this was St Cuthbert's home, and in Lauderdale he had a vision of St Aidan's soul being conducted to heaven.[1]

Many ancient camps, and many tumuli, are found in Lauderdale.[2] The Roman road into Scotland, Dere Street, crossed a ford at Newstead, near Melrose, where there had been a Roman fort and garrison, and entered Lauderdale. Dere Street is said to have been reconditioned by King Malcolm III and was probably used by him in his repeated warfare against the Norman kings ruling in England. The Roman road has now been traced from the Tweed through Lauderdale to Soutra.[3]

The valley may take its name form the River Leader or more directly from the principal town of Lauderdale, the Royal Burgh of Lauder,[4] The town is said to derive its name from the ancient family of the same name.[5] It has been noted that the name of the river between 1124 and 1165 was spelt Leder and Ledre, whilst the name of the town has always been spelt Lauueder, Lawedir, Laudre, Lawder, Lawedere, Lauueder etc.[6] Simeon of Durham names the rivwr as the Leder (He also calls Lothian Lauden at one point.) In a charter of King William I ("the Lion") (1165 - 1214) both Lauueder and Lauuederdale are mentioned, as is Loweder in another document of the same reign;[7] spellings have not been consistent.

The principal country house in the dale is Thirlestane Castle, the seat since 1595 of the Earl of Lauderdale, and where annual horse trials are held.

King David I of Scotland created a feudal Lordship of Regality of Lauderdale which he awarded to one of his favourites, the Anglo-Norman Hugh de Morville (d. 1162), whom he also made Constable of Scotland. The boundaries of his fief are still unclear, but the town existed before de Morville's arrival,[10] the Lauder family already holding various lands direct from the Crown before this, part of which was the estate attached to Whitslaid Tower. The de Morvilles of Lauderdale failed in the male line and their Lordship passed by marriage to Alan of Galloway, and a charter exists of "Alani constabularii Scotie, de Alwentchawis" (Allanshaws) in which mention is also made of "terras in territorio de Lauuedir".[11] The Lordship passed to his grandson, John Balliol (King John I), and after his forefeiture Robert The Bruce granted it to Sir James Douglas, his great supporter. Archibald Douglas husband of Princess Margaret, daughter of King Robert III, had a reconfirmation c1390 of the Lordship of "Lauderdaill" as heir of the Earl of Douglas. Archibald is herein also called "Lord of Galloway, Lord of Annandale, and of Lowedre".[12] Finally the Douglases were also forfeited.

Towards the southern end of Lauderdale, the town of Earlston is an ancient superiority of the Earls of Dunbar or March. "Robertus de Lauuedirr tunc noster seneschallus" witnessed a charter of "Patricii de Dunbar, comitis Marchie" during the reign of Robert the Bruce, and "Robetus de Lawedre, consanguineus noster" (a cousin) witnessed a charter of "Georgii comitis Marchie" relating to Sorrowlessfield, a property still extant, on the A68 road south of Earlston in the reign of Robert III.[7]

Laudsrdale, particularly in the north, is a fairly enclosed valley, and at its northern end high on Lammermuir it can reach 1,733 feet, and in winter the weather can be severe, often leading to road closures. The full length of Lauderdale exceeds ten miles and its breadth varies from three to seven miles.[8]

Up until the 17th century Lauderdale was an immense forest. From the time of Malcolm III, at least, it was a royal hunting ground. The entire district between the Leader and Gala Waters was covered with Lauder forest,[13] "the property of the Lauders of Lauder from a very early date"[14] and which was still in the possession of the family of Lauder of that Ilk through to the late 17th century.[15][16]