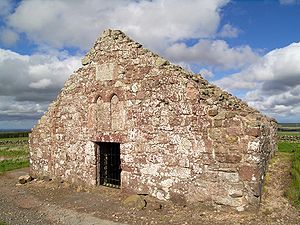 Soutra Aisle is a ruin standing on the moorland in the south of Midlothian, close to the village of Fala. It is the remains of the House of the Holy Trinity, a church that was part of a complex comprising a hospital and a friary. The site lies half a mile along the B6368 from its junction with the A68.

The hospital was founded in 1164 by King Malcolm IV, when he granted it the lands of Brotherstanes up to and including the lands of Lyndean.[1]

The complex at Soutra was built close to the Via Regia, the main route from the north to the Borders Abbeys. The hospital, known as the House of the Holy Trinity, was run by Augustinian Order and is believed to have been the largest hospital in mediæval Scotland. In an extensive Supplication to Rome dated 7 October 1444, the whole status of the foundation and the purpose of the hospital is discussed, where it is stated that it was "the founders intention to found there a hospital for the reception of the poor rather than a religious place". Its description of the site says: "the church is built at the top of a hill near a public way where there often fierce winds and frequent cold spells".

The records of the Great Seal of Scotland mentions Thomas Lauder (later Bishop of Dunkeld) as Master of the Hospital of Soutra on 26 February 1439 (no.226) and 20 May, 1444 (no.298). A Supplication to Rome in October 1444 states that he "had been Rector of the church or House of the Holy Trinity of Soltre, Diocese of Saint Andrews, for over seven years". He made one of the first grants (five shillings) towards the Foundation of the Collegiate Church of the Holy Trinity in Edinburgh, in 1462.

In addition to looking after the sick, the friars took in travellers and pilgrims travelling to shrines in the Borders and further afield. Being on the main route from the English border, it was at Soutra that many of the instigators and victims of the wars of that age between the kingdoms and their magnates would have passed in both directions, seeking refuge at this lonely stop on the edge of the Border hill country.

The remote nature of Soutra's position reflects mediæval society's suspicion and fear of sickness and pestilence, yet its vicinity to one of the few major routes in the Southern Upland at that time shows that it was an essential institution for the succour of the sick.

Recent archaeological works have uncovered a wealth of information about the care that was available from the friars. Investigations into the ground thereat have revealed evidence of rare seeds of medicinal herbs such as henbane, hemlock, and the non-native opium poppy.

Originally, the hospital was supported by the income from large monastic estates and contributions from wealthy patrons. Following the disgrace of Stephen Fleming, a Master of the Hospital, those estates entailed to the Hospital were confiscated by the Crown in the 1460s, and given to Trinity College Hospital in Edinburgh, leaving the establishment without income. The Hospital survived the Reformation and struggled on until the seventeenth century, but succumbed eventually. Its stones quarried and now forming many of the walls and dykes in the surrounding area, and the complex returned to grazing land. The aisle itself survived by having been the burial place of the Pringles of Soutra, now of Torwoodlee, with a lintel above the entrance dating from 1688. 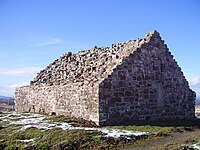