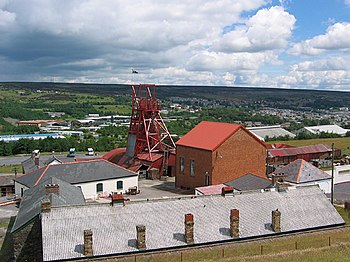 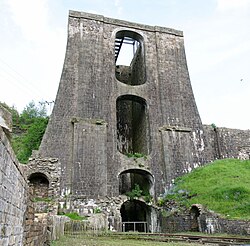 Blaenavon Industrial Landscape is an area of north-western Monmouthshire in and around Blaenavon which was inscribed a World Heritage Site by UNESCO in 2000.

In this area, coal and iron were mined in the heat of the Industrial Revolution. The Blaenavon Ironworks, now a museum, was a major centre of iron production using locally mined or quarried iron ore, coal and limestone. Raw materials and products were transported via horse-drawn tramroads, canals and steam railways.

The Landscape includes protected or listed monuments of the industrial processes, transport infrastructure, workers' housing and other aspects of early industrialisation in South Wales.

The Industrial Revolution in Britain was based on iron and coal, the main products of the South Wales valleys. Production of pig iron in the region grew from 39,600 tons in 1796 to 666,000 tons in 1852, and the iron was used to build railways, factories and engines around the world.

Blaenavon was an important centre of coal mining and iron making during the late 18th and early 19th centuries. The Blaenavon Ironworks was opened around 1789 and caused development of the mines, quarries and housing.

Blaenavon lies at the upper end of the River Lwyd valley.

The World Heritage Site is based on the large area of land that the Blaenavon Company leased in 1789. The site is on the north eastern rim of the South Wales Coalfield, and is an excellent example of an industrial landscape formed in the late 18th and early 19th centuries by mining and iron making activities.

The enrolled site covers twelve and a half square miles and contains the Blaenavon Ironworks and the Big Pit coal mine, surrounded by mines and quarries, manufacturing plant, railways, canal, workers' housing and social infrastructure.

Elements of the Landscape

The remains of the furnaces from the late 18th century and the 19th century are well preserved. Other elements include the 1839 water balance tower, two casting houses, ruined kilns, the base of the massive chimney of the blowing engine, the cast-iron structure that carried the blast pipes to the furnaces and ruins of workers' housing.

The Big Pit was the last deep coal mine to remain operational in the area. The surface buildings, winding gear and underground workings are still in excellent condition. The Big Pit coal mine, now managed by Amgueddfa Cymru – National Museum Wales, was worked from around 1860 until 1980. The original pithead buildings have been preserved, including the head frame, winding engine and baths.

The Big Pit Colliery was reopened as a museum in 1983. Visitors may take an underground tour. In 2005 it won the Gulbenkian Prize for museum of the year.

Other elements of the Industrial Landscape are the mines and quarries from which coal, iron ore, fire clay and limestone were extracted. There are traces of horse-drawn railways, tunnels and inclines that were used to carry iron ore, coal and limestone to the ironworks, and to carry pig iron to the Garnddyrys Forge. Wrought iron was taken from the forge to Llanfoist on the Brecknock and Abergavenny Canal for transport to other parts of Britain and the world.

There are walks and trails along which visitors may explore the Landscape. Waymarked footpaths follow the tracks of the earliest iron railways.

The steam railway has been restored as a heritage line known as the Pontypool and Blaenavon Railway, which has a station in the centre of the town; a shadow of the time when the railway was an important transport facility. 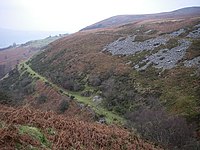 Hill's Tramroad from the Pwll Du Tunnel to the Garnddyrys Forge

The Landscape includes 24 scheduled monuments and 82 listed buildings, of which the most important are publicly owned.

At the time of inscription as a World Heritage Site many of the elements were vulnerable due to lack of conservation. Since then there has been extensive work on conserving the ironworks, Big Pit and other historic elements of Blaenavon and the surrounding landscape. There are continued efforts to ensure that new development does not reduce the value and appearance of the Landscape.

A World Heritage Centre was opened for visitors in 2008.

The Landscape is managed by the Blaenavon Partnership, which involves various authorities, agencies and other bodies and is led by the local council.