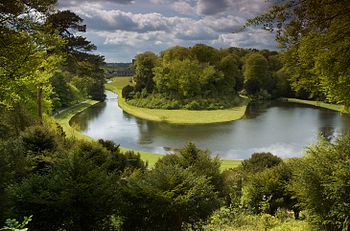 Studley Royal Park is an extensive landscape park in the North Riding of Yorkshire and in which are contained the ruins of Fountains Abbey, a lordly hall, and a church all within exquisite landscape in the meadows of the River Skell, just west of Ripon.

By the name 'Studley Royal Park including the ruins of Fountains Abbey', the park has been designated a World Heritage Site, covering 798 acres.[1]

The park features an 18th-century landscaped garden, in which the ruins of Fountains Abbey, some of the largest Cistercian ruins in Europe, provide an ornament. There is a Jacobean mansion, Fountains Hall, and a Victorian church, St Mary's, designed by William Burges. The park was developed around the abbey ruins.

Fountains Abbey was founded in 1132 by Benedictine monks who left St Mary's Abbey, York to follow the Cistercian order. After the dissolution of the monasteries in 1539 by Henry VIII, the Abbey buildings and over 500 acres of land were sold by the Crown to Sir Richard Gresham, a merchant. The property was passed down through several generations of Sir Richard's family, then sold to Stephen Proctor who built Fountains Hall probably between 1598 and 1604. The hall is a Jacobean mansion, built partly with stone from the Abbey ruins.[2]

Fountains Abbey mill is the only 12th-century Cistercian corn mill left in the United Kingdom and the oldest 'intact' building on the estate. 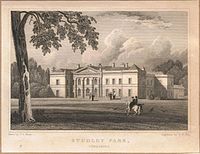 From 1452 onwards, Studley Royal was inhabited by the Mallory Family,[3] most notably by MPs John Mallory and William Mallory.

John Aislabie inherited the Studley estate from his elder brother in 1693. He was the Member of Parliament for Ripon in 1695, and in 1718 became Chancellor of the Exchequer. Aislabie was a principal sponsor of the South Sea Company scheme, the bill for which was promoted by him personally. In 1720 this vast financial operation collapsed, and as a consequence Aislabie was expelled from Parliament and disqualified for life from public office.

Aislabie returned to Yorkshire and devoted himself to the creation of the garden he had begun in 1718. After his death in 1742, his son William extended his scheme by purchasing the remains of the Abbey and Fountains Hall. He extended the landscaped area in the picturesque romantic style, contrasting with the formality of his father's work. Between them, the two created what is arguably England's most important 18th century Water Garden.

After William's death, the estate passed to his daughter Elizabeth Allanson and then to her niece, Mrs Elizabeth Sophie Lawrence, who lived there from 1808 until her death in 1845. It then devolved to Thomas de Grey, 2nd Earl de Grey, a distant relative on whose death in 1859 the estate passed to his nephew the Marquess of Ripon, the Viceroy of India, who built St Mary's church in the park. On the death of Frederick Robinson, 2nd Marquess of Ripon in 1923, the estate was acquired by his cousin Clare George Vyner.

In 1966 the estate was bought by West Riding County Council and in 1983 was taken over by the National Trust. 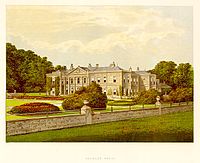 Studley Royal House (or Hall) stood in the north-west corner of the park. Originally a mediæval manor house, having a main block with forward projecting wings, it burned down in 1716 and was rebuilt by John Aislabie. He filled in the centre, to which his son William added a portico in 1762 to complete its Palladian appearance.

The building was destroyed by fire in 1946. A large stable block, built between 1728 and 1732, survived and is now a private house.

In 1986 the entire Park was designated a World Heritage Site by UNESCO. It gained recognition as it fulfills the criteria of being a masterpiece of human creative genius, and an outstanding example of a type of building or architectural or technological ensemble or landscape which illustrates significant stages in human history.

Since 1994 the estate has been within the Nidderdale Area of Outstanding Natural Beauty.

The park incorporates Fountains Abbey, Fountains Hall, and a number of other notable historic features.

The water garden at Studley Royal created by John Aislabie in 1718 is one of the best surviving examples of a Georgian water garden in Britain. It was expanded by his son, William who purchased the adjacent Fountains Estate. The garden's elegant ornamental lakes, canals, temples and cascades provide a succession of dramatic eye-catching vistas. It is also studded with a number of follies including a neo-Gothic castle and a palladian style banqueting house. 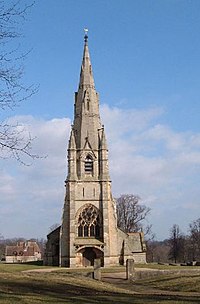 St Mary's Church was one of two, late Victorian, memorial churches in Yorkshire, built by the family of the First Marquess of Ripon in memory of Frederick Grantham Vyner. The other is the Church of Christ the Consoler at Skelton-on-Ure, and the architect of both was William Burges. Vyner was murdered by Greek bandits in 1870 and his mother, Lady Mary Vyner, and sister, Lady Ripon, used the unspent ransom, gathered to obtain his release, to build two churches in Vyner's memory on their respective Yorkshire estates.

Burges' appointment as architect was most likely due to the connection between his greatest patron, John Crichton-Stuart, 3rd Marquess of Bute and Vyner, who had been friends at Oxford. St Mary's, on Lady Ripon's estate at Studley Royal, was commissioned in 1870 and work began in 1871. The church was consecrated in 1878. As at Skelton, Burges' design demonstrates a move from his favoured Early-French, to an English style. Pevsner] writes of "a Victorian shrine, a dream of Early English glory." The interior is spectacular, exceeding Skelton in richness and majesty. The stained glass is of particularly high quality. St Mary's is Burges' "ecclesiastical masterpiece."[4]

The mediæval deer park, where the church stands, is home to between 300 - 350 deer and a wealth of plants and animals. At Studley there are three types of deer; Red Deer, Fallow Deer and Sika Deer.