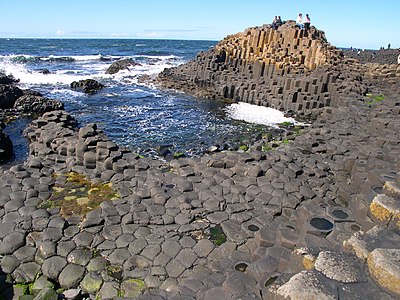 The Giant's Causeway is a spectacular irruption of some 40,000 vertical, interlocking, geometrical basalt columns spread over cliffs and out into the sea on the north coast of County Antrim. The Giant's Causeway has given rise to works of art and wild legends. It is scientifically believed to be the result of an ancient volcanic eruption.

The tops of the columns form stepping stones that lead from the cliff foot and disappear under the sea. Most of the columns are hexagonal, although there are also some with four, five, seven and eight sides. The tallest are about 36 feet high, and the solidified lava in the cliffs is 92 feet thick in places.

The Giant's Causeway is found on the coast about two miles north of the town of Bushmills. It is owned and managed by the National Trust and it is the most popular tourist attraction in Northern Ireland.

The structures in the Causeway have over several million years been weathered into shapes and formations. Some resemble objects, such as the Organ and Giant's Boot structures. Other features include many reddish, weathered low columns known as Giants Eyes, created by the displacement of basalt boulders; the Shepherd's Steps; the Honeycomb; the Giant's Harp; the Chimney Stacks; the Giant's Gate and the Camel's Hump. 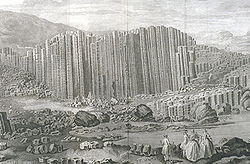 Engraving of Susanna Drury's A View of the Giant's Causeway: East Prospect

An old Gaelic legend has it that the Irish giant or warrior Finn McCool (Fionn mac Cumhaill) built the Causeway to walk to Scotland to fight his Scottish counterpart Benandonner. One version of the legend tells that Finn fell asleep before he got to Scotland. When he did not arrive, the much larger Benandonner crossed the bridge looking for him. To protect Finn, his wife Oonagh laid a blanket over him so he could pretend that he was actually their baby son. In a variation, Finn fled after seeing Benandonner's great bulk, and asked his wife to disguise him as the baby. In both versions, when Benandonner saw the size of the 'infant', he assumed the alleged father, Finn, must be gigantic indeed. Therefore, Benandonner fled home in terror, ripping the Causeway up as he went lest he be followed by Finn.

Another variation is that Oonagh painted a rock shaped like a steak and gave it to Benandonner, whilst giving the "baby" Finn a normal steak. When Benandonner saw that the baby was able to eat it so easily, he ran away, tearing the causeway up.

Another version of the legend was that Finn had spent many days and nights trying to create a bridge to Scotland because he was challenged by another giant. A boatman told him that the opponent was much larger than he. Finn then told his wife and she came up with an ingenious plan to dress Finn like a baby. They spent many nights creating a costume and bed. When the opponent came to Finn's house; Finn's wife told him that Finn was out woodcutting and the opponent would have to wait for him to return. Then Finn's wife showed him her baby and when the opponent saw him he was terrified at the thought of how huge Finn would be. He ran back to Scotland and threw random stones from the causeway into the waters bellow.

The "Causeway" legend corresponds with geological history in as much as there are similar basalt formations (a part of the same ancient lava flow) at the site of Fingal's Cave on the isle of Staffa in the Inner Hebrides.[1]

Some 50 to 60 million years ago,[2] during the paleogene period, County Antrim was subject to intense volcanic activity, when highly fluid molten basalt intruded through chalk beds to form an extensive lava plateau. As the lava cooled rapidly it contracted, and while contraction in the vertical direction reduced the flow's thickness without fracturing, horizontal contraction could only be accommodated by cracking throughout the flow. The size of the columns is primarily determined by the speed at which lava from a volcanic eruption cools[3]. The extensive fracture network produced the distinctive columns seen today. Their hexagonal shape is the result of crystalline structures in the rock.

The basalts were originally part of a great volcanic plateau called the Thulean Plateau, which formed during the paleogene period.[4]

The discovery of the Giant's Causeway was announced to the wider world in 1693 by the presentation of a paper to the Royal Society from Sir Richard Bulkeley, a fellow of Trinity College, Dublin, although the discoverer had, in fact, been the Bishop of Derry who had visited the site a year earlier. The site received international attention when Dublin artist Susanna Drury made watercolour paintings of it in 1739; they won Drury the first award presented by the Royal Dublin Society in 1740 and were engraved in 1743.[5] In 1765 an entry on the Causeway appeared in volume 12 of the French Encyclopédie, which was informed by the engravings of Drury's work; the engraving of the "East Prospect" itself appeared in a 1768 volume of plates published for the Encyclopédie.[6] In the caption to the plates French geologist Nicolas Desmarest suggested, for the first time in print, that such structures were volcanic in origin. 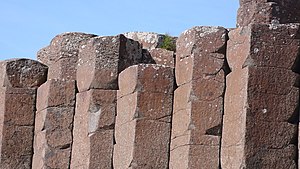 The site first became popular with tourists during the nineteenth century, particularly after the opening of the Giant's Causeway Tramway, and only after it was taken into the care of the National Trust in the 1960s were some of the vestiges of commercialism removed. Visitors can walk over the basalt columns which are at the edge of the sea, a half mile walk from the entrance to the site.

On the more cynical side, man of letters Samuel Johnson said, when asked about the Causeway, "Worth seeing, yes; but not worth going to see." 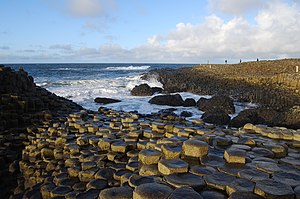 The Causeway has been without a permanent visitors' centre since 2000, when the last building burned down.[7] Public money was set aside to construct a new centre and a proposal was accepted for a centre (sunken into the ground to reduce the impact to the landscape). Howevr the process collapsed in a political fuss and the local council gave the land to the National Trust. A new plan would see the centre built by 2011.[8]

The area is a haven for sea birds such as fulmar, petrel, cormorant, shag, redshank guillemot and razorbill, while the weathered rock formations host a number of rare and unusual plants including sea spleenwort, hare's foot trefoil, vernal squill, sea fescue and frog orchid.

The basalt columns of the Giant's Causeway are not unique in the world unless in scale. Basalt columns occur on many scales, depending on how fast the original lava cooled, faster cooling producing smaller columns. Similar sites include:

The Causeway was declared a World Heritage Site by UNESCO in 1986, and a National Nature Reserve in 1987 by the Department of the Environment for Northern Ireland. In a 2005 opinion poll of Radio Times readers, the Giant's Causeway was named as the fourth greatest natural wonder in the United Kingdom.