The Pontcysyllte Aqueduct is a navigable aqueduct that carries the Llangollen Canal over the valley of the River Dee in Denbighshire. Completed in 1805, it is the longest and highest aqueduct in Britain, a Grade I Listed Building[1] and a World Heritage Site.

The name is from the Welsh language and means "Cysyllte Bridge".[2] For most of its existence it was known as Pont y Cysyllte ("Bridge of Cysyllte"). Other translations such as "Bridge of the Junction" or "The Bridge that links" are modern, and incorrect, inventions, from the literal English translation of cysyllte being "junctions" or "links", as the township of Cysyllte existed for centuries before the bridge was built.

The aqueduct, built by Thomas Telford and William Jessop, is 336 yards long, 4 yards wide and 5¼ feet deep. It consists of a cast iron trough supported 126 feet above the river on iron arched ribs carried on eighteen hollow masonry piers (pillars). Each of the nineteen spans is 53 feet wide. Despite considerable public scepticism, Telford was confident the construction method would work: he had previously built at least one cast iron trough aqueduct – the Longdon-on-Tern aqueduct on the Shrewsbury Canal, still visible in the middle of a field, though the canal was abandoned years ago. Part of what was originally called the Ellesmere Canal, it was one of the first major feats of civil engineering undertaken by Telford, by then a leading civil engineer, supervised by Jessop, the more experienced canal engineer. The iron was supplied by William Hazledine from his foundries at Shrewsbury and nearby Cefn Mawr. It was opened on 26 November 1805, having taken around ten years to design and build at a total cost of £47,000. Adjusted for inflation this is equivalent to no more than £3,410,000 in 2015, but bore a much larger relationship to contemporary GDP of only some £400 million.[3] On the other hand, such a project would cost more today due to factors that did not apply in the early 19th century such as higher real wages, safety measures, new regulations and taxes, financing fees and so on.

At the time of the aqueduct's completion, the canal terminated at a wharf slightly to its north. A feeder to bring water from the Horseshoe Falls beyond Llangollen was completed three years later in 1808, and at some point after 1820 the Plas Kynaston Canal was built to serve industry in the Cefn Mawr and Rhosymedre areas. There might have been another canal extension ("Ward's") but detailed records do not survive.[4] 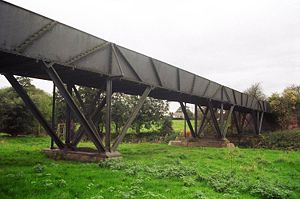 The Longdon-on-Tern aqueduct, a similar construction by Telford

The mortar used lime, water and ox blood.[5] The iron castings for the trough were produced at the nearby Plas Kynaston Foundry, Cefn Mawr, which was built by the Shrewsbury ironfounder and millwright William Hazledine in the hope of gaining the contract. The rib castings may have been made at Hazledine's original works at Coleham, near Shrewsbury.[6] The trough was made from flanged plates of cast iron, bolted together, with the joints bedded with Welsh flannel and a mixture of white lead and iron particles from boring waste.[7] The plates are not rectangular but shaped as voussoirs, similar to those of a stone arch. There is no structural significance to their shape: it is a decorative feature only, following the lines of the stiffening plates (see below) in the castings beneath.[7] The supporting arches, four for each span, are in the form of cast iron ribs, each cast as three voussoirs with external arches cast with an un-pierced web to give greater strength, at the cost of extra weight. Using cast iron in this way, in the same manner as the stone arch it supersedes, makes use of the material's strength in compression.[8] They also give an impression of greater solidity than would be the case were the webs pierced. This impression is enhanced by the arrangement of strips of thicker stiffening incorporated into the castings, arranged in the manner of joints between voussoirs. Cast plates are laid transversely to form the bed of the canal trough. The trough is not fastened to the arches, but lugs are cast into the plates to fit over the rib arches to prevent movement.[7] It was left for six months with water inside to check that it was watertight. A feature of a canal aqueduct, in contrast with a road or railway viaduct, is that the vertical loading stresses are virtually constant. According to Archimedes' principle, the mass (weight) of a boat and its cargo on the bridge pushes an equal mass of water off the bridge.

The towpath is mounted above the water, with the inner edge carried on cast-iron pillars in the trough. This arrangement allows the water displaced by the passage of a narrow boat to flow easily under the towpath and around the boat, enabling relatively free passage. Pedestrians, and the horses once used for towing, are protected from falling from the aqueduct by railings on the outside edge of the towpath, but the holes in the top flange of the other side of the trough, capable of mounting railings, were never used. The trough sides rise only about 6 inches above the water level, less than the depth of freeboard of an empty narrow boat, so the helmsman of the boat has no visual protection from the impression of being at the edge of an abyss. The trough of the Cosgrove aqueduct has a similar structure, although it rests on trestles rather than iron arches. It is also less impressively high.

Every five years the ends of the aqueduct are closed and a plug in one of the highest spans is opened to drain the canal water into the River Dee below, for inspection and maintenance of the trough.[9][10]

The canal effectively ends after a short distance on the north side, apart from a feeder to the Horseshoe Falls on the River Dee via Llangollen. The terrain northwards appears to have been the main problem in preventing significant further extension: apart from one or more local spurs of perhaps a thousand yards serving industry south of Cefn Mawr and towards Rhosymedre [4] other traffic was handled by the Ruabon Brook Tramway which climbed towards Acrefair and Plas Bennion, this was eventually upgraded to steam operation and extended towards Rhosllannerchrugog and Wrexham.

The aqueduct and surrounding lands were submitted to the "tentative list" of properties being considered for UNESCO World Heritage Site status in 1999.[11] The aqueduct was suggested as a contender in 2005—its 200th anniversary year[12]—and it was formally announced in 2006 that a larger proposal, covering a section of the canal from the aqueduct to Horseshoe Falls would be the United Kingdom's 2008 nomination.[13][14]

The length of canal from Rhoswiel, Shropshire to the Horseshoe Falls including the main Pontcysyllte Aqueduct structure as well as the older Chirk Aqueduct, were visited by assessors from UNESCO during October 2008, to analyse and confirm the site management and authenticity. The aqueduct was inscribed by UNESCO on the World Heritage List on 27 June 2009.[15]

In March 2010 it was reported that the site had attracted a thriving community of otters.[16]