New Lanark is a village in Lanarkshire, standing by the River Clyde, approximately 1½ miles from Lanark, the county town, and some 25 miles southeast of Glasgow.

New Lanark was founded in 1786 by David Dale, who built cotton mills and housing for the mill workers. Dale built the mills there in a brief partnership with the Lancashire inventor and entrepreneur Richard Arkwright to take advantage of the water power provided by the only waterfalls on the River Clyde. Under the ownership of a partnership that included Dale's son-in-law, Robert Owen, a philanthropist and social reformer from Montgomeryshire, New Lanark became a successful business and an epitome of utopian living as well as an early example of a planned settlement and so an important milestone in the historical development of urban planning.[1]

The New Lanark mills operated until 1968. After a period of decline, the New Lanark Conservation Trust (NLCT) was founded in 1974 (now known as the New Lanark Trust (NLT)) to prevent demolition of the village. By 2006 most of the buildings have been restored and the village has become a major tourist attraction. It is a UNESCO World Heritage Sites and an Anchor Point of ERIH - The European Route of Industrial Heritage.

The New Lanark cotton mills were founded in 1786 by David Dale in a brief partnership with Richard Arkwright. Dale was one of the self-made "Burgher Gentry" of Glasgow who, like most of this gentry, had a summer retreat, an estate at Rosebank, Cambuslang, not far from the Falls of Clyde, which have been painted by J M W Turner and many other artists. The mills used the recently developed water-powered cotton spinning machinery invented by Richard Arkwright.

Dale sold the mills, lands and village in the early 19th century for £60,000, payable over 20 years, to a partnership that included his son-in-law Robert Owen. Owen, who became mill manager in 1800, was an industrialist who carried on his father-in-law's philanthropic approach to industrial working and who subsequently became an influential social reformer. New Lanark, with its social and welfare programmes, epitomised his utopian ideas which were later an inspiration for socialists.[2] The town and mills are important historically through their connection with Owen's ideas, but also because of their role in the developing industrial revolution in the United Kingdom and also their place in the history of urban planning.[3][4]

The New Lanark mills depended upon water power. A dam was constructed on the Clyde above New Lanark and water was drawn off the river to power the mill machinery. The water first travelled through a tunnel, then through an open channel called the lade. It then went to a number of water wheels in each mill building. It was not until 1929 that the last waterwheel was replaced by a water turbine. Water power is still used in New Lanark. A new water turbine has been installed in Mill Number Three to provide electricity for the tourist areas of the village.

In Owen's time some 2,500 people lived at New Lanark, many from the poorhouses of Glasgow and Edinburgh.[5] Although not the grimmest of mills by far, Owen found the conditions unsatisfactory and resolved to improve the workers' lot. He paid particular attention to the needs of the 500 or so children living in the village (one of the tenement blocks is named Nursery Buildings) and working at the mills, and opened the first infants' school in Britain in 1817, although the previous year he had completed the Institute for the Formation of Character.[6]

The mills thrived commercially, but Owen's partners were unhappy at the extra expense incurred by his welfare programmes. Unwilling to allow the mills to revert to the old ways of operating, Owen bought out his partners. In 1813 the Board forced an auction, hoping to obtain the town and mills at a low price but Owen and a new board (including the economist Jeremy Bentham) that was sympathetic to his reforming ideas won out.[7]

New Lanark became celebrated throughout Europe, with many leading royals, statesmen and reformers visiting the mills. They were astonished to find a clean, healthy industrial environment with a contented, vibrant workforce and a prosperous, viable business venture all rolled into one. Owen’s philosophy was contrary to contemporary thinking, but he was able to demonstrate that it was not necessary for an industrial enterprise to treat its workers badly to be profitable. Owen was able to show visitors the village’s excellent housing and amenities, and the accounts showing the profitability of the mills.

As well as the mills' connections with reform, socialism and welfare, they are also representative of the Industrial Revolution that occurred in Britain in the 18th and 19th centuries and which fundamentally altered the shape of the world. The planning of employment in the mills alongside housing for the workers and services such as a school also makes the settlement iconic in the development of urban planning in the UK.[8]

In 1825, control of New Lanark passed to the Walker family when Owen left Britain to start settlement of New Harmony in the United States. The Walkers managed the village until 1881, when it was sold to Birkmyre and Sommerville and the Gourock Ropeworks (although they tried unsuccessfully to sell the mills and the town in 1851.[9] They and their successor companies remained in control until the mills closed in 1968.

The town and the industrial activity had been in decline before then, but after the mills closed migration away from the village accelerated, and the buildings began to deteriorate.[10] The top two floors of Mill Number 1 were removed in the 1945 but the building has since been restored and is now the New Lanark Mill Hotel. In 1963 the New Lanark Association (NLA) was formed as a housing association and commenced the restoration of Caithness Row and Nursery Buildings. In 1970 the mills, other industrial buildings and the houses used by Dale and Owen were sold to Metal Extractions Limited, a scrap metal company. In 1974 the NLCT (now the NLT) was founded to prevent demolition of the village. A compulsory purchase order was used in 1983 to recover the mills and other buildings from Metal Extractions after a repairs notice had been served in 1979. This was because of the state of repair of the buildings despite their listing as historic buildings that required their legal preservation in 1971.[11] They are now controlled by the NLT, either directly through the Trust or through wholly owned companies (New lanark trading Ltd, New Lanark Hotal Ltd and New Lanark Homes).[12] By 2005 most of the buildings had been restored and the village has become a major tourist attraction.

In the mid 19th century, an entire family would have been housed in a single room. Some sense of such living conditions can be obtained by visiting the David Livingstone Centre at Blantyre. David Dale, who founded New Lanark, was also involved in the mills at Blantyre. Only one tenement row has survived in Blantyre, and that building is now a museum. This is mostly devoted to David Livingstone, who was born there in 1813, but it includes a re-creation of the single~room living conditions of the time at New Lanark, featuring trundle beds for children such as Livingstone would have used. The David Livingstone Centre is 18 miles by road from New Lanark, between Glasgow and Hamilton.

The living conditions in the village gradually improved, and by the early 20th century families would have had the use of several rooms. It was not until 1933 that the houses had interior cold water taps for sinks and the communal outside toilets were replaced by inside facilities.

From 1938 the village proprietors provided free electricity to all the homes in New Lanark, but only enough power was available for one dim bulb in each room. The power was switched off at 10 pm Sunday-Friday, 11 pm Saturday. In 1955 New Lanark was connected to the National Grid.[13] 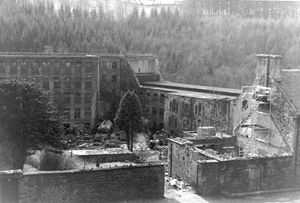 Dereliction in New Lanark in 1983

It has been estimated that over 400,000 people visit the village each year. The importance of New Lanark has been recognised by UNESCO as one of 28 World Heritage Sites in the United Kingdom and its overseas territories, alongside such marvels as Stonehenge, Hadrian's Wall, Edinburgh Old and New Towns and St Kilda. The mills and town were listed in 2001 after an unsuccessful application for World Heritage listing in 1986.[14]

About 200 people live in New Lanark. Of the residential buildings, only Mantilla Row and Double Row have not been restored. Some of the restoration work was undertaken by the NLA and the NLCT. Braxfield Row and most of Long Row were restored by private individuals who bought the houses as derelict shells and restored them as private houses. In addition to the 20 owner-occupied properties in the village there are 45 rented properties let by the NLA, which is a registered housing association. The NLA also owns other buildings in the village. It has been criticised for its failure to restore Double Row and rebuild Mantilla Row.

In 2009 the NLA was wound up as being financially and administratively unviable, and responsibility for the village's tenanted properties passed to the NLCT.

Considerable attention has been given to maintaining the historical authenticity of the village. No television aerials or satellite dishes are allowed in the village, and services such as telephone, television and electricity are delivered though buried cables. To provide a consistent appearance all external woodwork is painted white, and doors and windows follow a consistent design. Householders used to be banned from owning dogs, but this rule is no longer enforced.

Some features introduced by the NLT, such as commercial signage and a glass bridge connecting the Engine House and Mill Number Three, have been criticised. The retention of a 1924-pattern red telephone box in the village square has also been seen as inappropriate.

The mills, the hotel and most of the non-residential buildings in the village are owned and operated by the NLT through wholly owned companies. 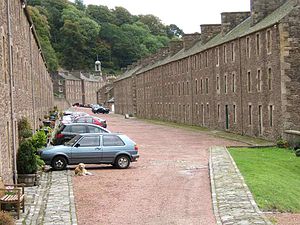 Rosedale Street with Long Row to left, Double Row to near right and Wee Row to middle right 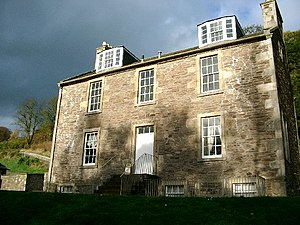 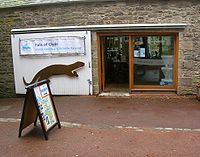 There is a large free car park on the outskirts of the village. Only disabled visitors may park in the village. There is a bus service from Lanark, which has a railway station with half-hourly services from Glasgow.

The Clyde walkway long distance footpath passes through the village[16] and the Scottish Wildlife Trust's visitor centre for the Falls of Clyde Nature reserve is based in a group of mill buildings.