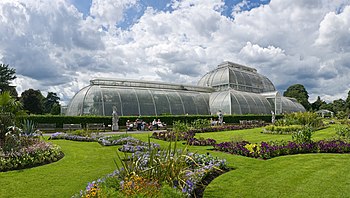 The Palm House and Parterre 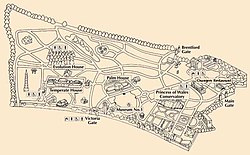 The Royal Botanic Gardens, Kew, commonly known as Kew Gardens, is the world's largest collection of living plants. The garden spread over 299 acres along the River Thames in Surrey, at Kew.

The gardens were founded in 1840, developed from the exotic garden at Kew Park, and provide a centre for botanical research unparalleled in the world. Today its living collections include more than 30,000 different kinds of plants, while the herbarium, which is one of the largest in the world, has over seven million preserved plant specimens. The library contains more than 750,000 volumes, and the illustrations collection contains more than 175,000 prints and drawings of plants. It is one of London's top tourist attractions. In 2003, the gardens were put on the UNESCO list of World Heritage Sites.

Kew Gardens, together with the botanic gardens at Wakehurst Place in Sussex, are managed by the Royal Botanic Gardens, Kew an internationally important botanical research and education institution that employs 750 staff, and is a non-departmental public body sponsored by the Department for Environment, Food and Rural Affairs.[1] 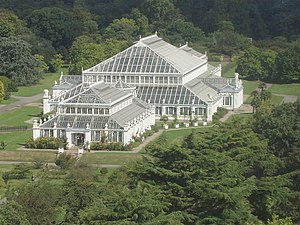 The Kew site, which has been dated as formally starting in 1759,[2] though can be traced back to the exotic garden at Kew Park, formed by Lord Capel John of Tewkesbury, consists of 299.0 acres (121.0 ha)[3] of gardens and botanical glasshouses, four Grade I listed buildings and 36 Grade II listed structures, all set in an internationally significant landscape.[4]

Kew Gardens has its own police force, Kew Constabulary, which has been in operation since 1847.

The village of Kew consists mainly of the gardens themselves, a small neighbouring village centre, station, residential roads leading away from the garden and a small green in the bend in the Thames by Kew Bridge. Royal residences in the area which would later influence the layout and construction of the gardens began when King Henry V built Sheen Palace in 1501 in nearby Sheen (Richmond), developed as a permanent royal residence for Henry VII, who had been Earl of Richmond.[5] Around the start of the 16th century courtiers attending Richmond Palace settled in Kew and built large houses.[6] Early royal residences at Kew included Mary Tudor's house, which was in existence by 1522 when a driveway was built to connect it to the palace at Richmond.[6] Around 1600, the land that would become the gardens was known as Kew Field, a large field strip farmed by one of the new private estates.[7][8]

The exotic garden at Kew Park, formed by Lord Capel John of Tewkesbury, was enlarged and extended by Augusta, Dowager Princess of Wales, the widow of Frederick, Prince of Wales. The origins of Kew Gardens can be traced to the merging of the royal estates of Richmond and Kew in 1772.[9] William Chambers built several garden structures, including the lofty Chinese pagoda built in 1761 which still remains. George III enriched the gardens, aided by William Aiton and Sir Joseph Banks.[10] The old Kew Park (by then renamed the White House), was demolished in 1802. The "Dutch House" adjoining was purchased by George III in 1781 as a nursery for the royal children. It is a plain brick structure now known as Kew Palace.

Launcelot Brown applied for the position of master gardener at Kew, and was rejected: he went on to become Britain’s most renowned landscape architect, known as ‘Capability Brown’.[11]

In 1840 the gardens were adopted as a national botanical garden, in large part due to the efforts of the Royal Horticultural Society and its president William Cavendish.[12] Under Kew's director, William Hooker, the gardens were increased to 75 acres and the pleasure grounds, or arboretum, extended to 269 acres, and later to its present size of 299 acres.

The Palm House was built by architect Decimus Burton and iron-maker Richard Turner between 1844 and 1848, and was the first large-scale structural use of wrought iron. It is considered "the world's most important surviving Victorian glass and iron structure."[13][14] The structure's panes of glass are all hand-blown. The Temperate House, which is twice as large as the Palm House, followed later in the 19th century. It is now the largest Victorian glasshouse in existence. Kew was the location of the successful effort in the 19th century to propagate rubber trees for cultivation outside South America.

In February 1913, the Tea House was burned down by suffragettes Olive Wharry and Lilian Lenton during a series of arson attacks in London. Kew Gardens lost hundreds of trees in the Great Storm of 1987.[15] From 1959 to 2007 Kew Gardens had the tallest flagpole in Britain. Made from a single Douglas-fir from Canada, it was given to mark both the centenary of the Canadian Province of British Columbia and the bicentenary of Kew Gardens. The flagpole was removed after damage by weather and woodpeckers.[16]

In July 2003, the gardens were put on the list of World Heritage Sites[2] by the United Nations Educational, Scientific and Cultural Organization.

During the construction of the conservatory a time capsule was buried. It contains the seeds of basic crops and endangered plant species and key publications on conservation.[23] 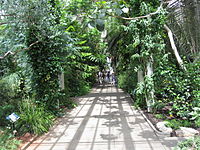 Inside the Temperate House

There is a viewing gallery in the central section from which visitors were able to look down on that part of the collection.

It was built to house the Victoria amazonica, the largest of the Nymphaeaceae family of water lilies. This plant was originally transported to Kew in phials of clean water and arrived in February 1849, after several prior attempts to transport seeds and roots had failed. Although various other members of the Nymphaeaceae family grew well, the house did not suit the Victoria, purportedly because of a poor ventilation system, and this specimen was moved to another, smaller, house. 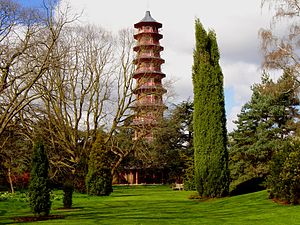 In the south-east corner of Kew Gardens stands the Great Pagoda (by Sir William Chambers), erected in 1762, from a design in imitation of the Chinese Ta. The lowest of the ten octagonal storeys is 49 feet in diameter. From the base to the highest point is 163 feet.

Each storey finishes with a projecting roof, after the Chinese manner, originally covered with ceramic tiles and adorned with large dragons; a story is still propagated that they were made of gold and were reputedly sold by George IV to settle his debts.[24] In fact the dragons were made of wood painted gold, and simply rotted away with the ravages of time. The walls of the building are composed of brick. The staircase, 253 steps, is in the centre of the building. The Pagoda was closed to the public for many years, but was reopened for the summer months of 2006 and is now open permanently. During the Second World War holes were cut in each floor to allow for drop-testing of model bombs.

Built for the Japan-British Exhibition (1910) and moved to Kew in 1911, the Chokushi-Mon ("Imperial Envoy's Gateway") is a four-fifths scale replica of the karamon (gateway) of the Nishi Hongan-ji temple in Kyoto. It lies about 150 yards west of the Pagoda and is surrounded by a reconstruction of a traditional Japanese garden. 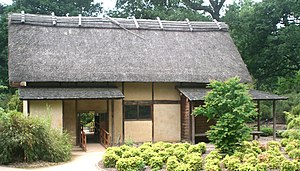 Following the Japan 2001 festival,[25] Kew acquired a Japanese wooden house called a minka. It was originally erected in around 1900 in a suburb of Okazaki. Japanese craftsmen reassembled the framework and British builders who had worked on the Globe Theatre added the mud wall panels.

Work on the house started on 7 May 2001 and, when the framework was completed on 21 May, a Japanese ceremony was held to mark what was considered an auspicious occasion. Work on the building of the house was completed in November 2001 but the internal artefacts were not all in place until 2006.

The Minka house is located within the bamboo collection in the west central part of the gardens.

Within the conservation area is a cottage that was given to Queen Charlotte as a wedding present on her marriage to King George III. It has been restored by Historic Royal Palaces and is separately administered by them and is open to the public on weekends and bank holidays during the summer.

Kew Palace is the smallest of the British royal palaces. It was built by Samuel Fortrey, a Dutch merchant in around 1631. It was later purchased by George III. The construction method is known as Flemish bond and involves laying the bricks with long and short sides alternating. This and the gabled front give the construction a Dutch appearance.

To the rear of the building is the "Queen's Garden" which includes a collection of plants believed to have medicinal qualities. Only plants that were extant in England by the 17th century are grown in the garden.

The building underwent significant restoration before being reopened to the public in 2006.

It is administered separately from Kew Gardens, by Historic Royal Palaces.

In front of the palace is a sundial, which was given to Kew Gardens in 1959 to commemorate a royal visit. It was sculpted by Martin Holden and is based on an earlier sculpture by Thomas Tompion, a celebrated 17th century clockmaker.[26] 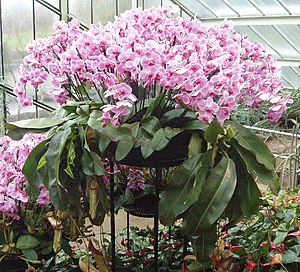 Part of the "Tropical Extravaganza" for Kew's 250th anniversary in 2009

The plant collections include the Aquatic Garden, which is near the Jodrell laboratory. The Aquatic Garden, which celebrated its centenary in 2009, provides conditions for aquatic and marginal plants. The large central pool holds a selection of summer-flowering water lilies and the corner pools contain plants such as reed mace, bulrushes, phragmites and smaller floating aquatic species.

The Arboretum, which covers over half of the total area of the site, contains over 14,000 trees of many thousands of varieties. The Bonsai Collection is housed in a dedicated greenhouse near the Jodrell laboratory. The Cacti Collection is housed in and around the Princess of Wales Conservatory. The Carnivorous Plant collection is housed in the Princess of Wales Conservatory. The Grass Garden was created on its current site in the early 1980s to display ornamental and economic grasses; it was redesigned and replanted between 1994 and 1997. It is currently undergoing a further redesign and planting. Over 580 species of grasses are displayed.

The Herbaceous Grounds (Order Beds) were devised in the late 1860s by Sir Joseph Hooker, then director of the Royal Botanic Gardens, so that botany students could learn to recognise plants and experience at first hand the diversity of the plant kingdom. The collection is organised into family groups. Its name arose because plant families were known as natural orders in the 19th century. Over the main path is a rose pergola built in 1959 to mark the bicentennial of the Gardens. It supports climber and rambling roses selected for the length and profusion of flowering.

The Orchid Collection is housed in two climate zones within the Princess of Wales Conservatory. To maintain an interesting display the plants are changed regularly so that those on view are generally flowering. The Rock Garden, originally built of limestone in 1882, is now constructed of Sussex sandstone from West Hoathly, Sussex. The rock garden is divided into six geographic regions: Europe, Mediterranean and Africa, Australia and New Zealand, Asia, North America, and South America. There are currently 2,480 different "accessions" growing in the garden.

The Palm House and lake to Victoria Gate

The world's smallest water-lily, Nymphaea thermarum, was saved from extinction when it was grown from seed at Kew, in 2009.[27][28]

The Kew herbarium is one of the largest in the world with approximately 7 million specimens used primarily for taxonomic study.[29] The herbarium is rich in types for all regions of the world, especially the tropics.

Kew provides advice and guidance to police forces around the world where plant material may provide important clues or evidence in cases. In one famous case the forensic science department at Kew were able to ascertain that the contents of the stomach of a headless corpse found in the river Thames contained a highly toxic African bean.[30]