The Pontypool and Blaenavon Railway is a two-mile volunteer-run heritage railway in Monmouthshire. Trains run between a halt platform opposite the Whistle Stop public house (famed for its collection of miner's lamps) southwards to the town of Blaenavon via a two-platform station at the site of former colliery furnace of the Big Pit National Coal Museum.[1]

The line is the highest preserved standard-gauge line in the United Kingdom,[2] and also uniquely having the only standard-gauge rail-over-rail bridge within preservation.[3]

History of the line

The line from Brynmawr to Blaenavon was originally built in 1866 by the Brynmawr and Blaenavon Railway[4] and immediately leased to the London and North Western Railway (LNWR) to transport coal to the Midlands via the Merthyr, Tredegar and Abergavenny Railway. The line was completed in the late 1860s and the LNWR were operating passenger trains over the line by 1872. Eight years later it was extended to meet the Great Western Railway (GWR) at Abersychan & Talywain. Here the line carried on down the valley through Pontypool Crane Street Station to the coast at Newport. In 1922, the LNWR was grouped into the London, Midland and Scottish Railway. In later years the line saw a variety of GWR locomotives operating from pit to port, however the railway retained its LNWR infrastructure up until the very last days before its closure.

From the turn of the century the line served mining activity centred on several pits and collieries between Brynmawr and Waunavon. The first of these was the Waun Nantyglo colliery, which was situated a little east of a tramway which later carried the B4248 Brynmawr to Blaenavon Road. The connection was removed by 1925. As Waunavon was approached on a facing branch to the left was built, leading to Clydach colliery, but these had gone by 1915, to be replaced by New Clydach Colliery sidings. Vestiges of these remained until 1950. Some 300 yards south of Waunavon station a branch, built in 1870, veered to the West to serve the Milfraen Colliery. The space between the single-platform station at Waunavon and the branch was occupied by a series of loops and sidings. In 1913 a small platform, called Garn-yr-Erw halt was built just north of the Whistle Road Bridge. This halt had no timetable for passengers as it was used only by miners.[5]

By 1938 Milfraen Pit had ceased production having exhausted its own coal reserves, the branchline that served it was removed in 1937. The line was closed to passengers, not during the Beeching Cuts which befell the GWR route to Blaenavon Low Level, but in 1941 due to the exigencies of the Second World War. Blaenavon shed closed in 1942 and eventually goods also ceased in 1954. The line was retained for wagon storage until 1953, and around 1950, a temporary siding was laid in connection with opencast workings on the Blorenge, branching east roughly at the point where the Milfraen Colliery branch had previously branched west. The declining situation continued through the 1950s, then Varteg Hill [6] subsequently closed in 1964, leaving Big Pit as the primary exporter of coal left. The once double track to Pontypool was then singled in June 1965. Although passenger and goods traffic had long ceased to Brynmawr the track was re-laid by the National Coal Board to just south of Waunavon station again during the 1970s for the Black Lion Disposal Point washery.

Although the track along the whole route to Brynmawr was finally lifted in July 1961, the section from Blaenavon to Pontypool was still in use for coal trains from other local mines until Big Pit finally closed in 1980. The line from Cwmbran was dismantled right up to outside Blaenavon High Level station whilst the washery and other colliery buildings (which were all but demolished during 1987). Much of the railway today has now become part of the National Cycle Network Route 46.[7]

The railway between Furnace Sidings and Whistle Inn Halt was opened to visitors in 1983. It runs every weekend between spring and September. There is also a selection of special weekends through the spring and summer, daily (with the exceptions of Monday and Fridays) in August, as well as Santa Specials nearing Christmas.

The railway did not increase its length of track for a quarter century after its opening, but increased as a going concern, with a larger number of volunteers, a larger amount of operational rolling stock, and more definite plans for the railway's future.

In May 2010 the railway was extended a distance of roughly a mile and a quarter southwards to the site of the former Blaenavon High Level station (once the London and North Western Railway's station in the town).[8]

The Pontypool Blaenavon Railway Company was granted an Order under the Transport and Works Act to extend and operate the line.

Work, which started in late 2004, was initially complicated by difficulty in determining who built the railway. The order allowing most of the initial construction was the Brynmawr and Blaenavon Act of 1866, but a short section in the south was built under the LNWR (Wales &c) Act of 1875. Once the two months spent on this research was complete matters progressed rapidly so that a formal application to the Welsh Assembly was made on 3 May 2005. By the end of June 2005 the application became public with a two-month subsequent period allowed for formal objection.

By 28 November 2005, the inspector made his report to Parliament. Subsequently, a full meeting of the planning Decision Committee of the National Assembly for Wales approved the application on 24 January 2006.

The route southwards was made difficult by the need to refurbish a number of bridges en route. A substantial report issued by the Company to Torfaen Council, the successor to the Welsh Development Agency, and other interested parties, estimated the lowest cost for the extension and the provision of a minimal station at High Level at between £235K and £395K, with cost of the bridges lying between £162K and £323K—by far the dominant item in the total cost.

The Company eventually achieved funding from the Welsh Assembly Government's Heads of the Valleys programme to meet much of the refurbishment costs. Blaenavon (High Level) station is close to the centre of Blaenavon town centre, and as a result, a substantial increase in passenger numbers is confidently expected. Blaenavon is the centre of the World Heritage Site of the Blaenavon Industrial Landscape, a landscape which includes Big Pit National Coal Museum and the famous Blaenavon Ironworks.[10]

The presence of the railway there is expected to significantly add to the visitor experience and tourist potential of the town.

With Phase 1 achieved, the railway constructed a branch line into the National Mining Museum in 2011 before turning towards extending the line northwards, under a small road bridge and along the still intact track bed to Waunavon, the summit of the line which at 1,400 ft above sea level was the highest standard-gauge station in both England and Wales.[11]

There is also growing political interest for the preserved line to extend further again to Brynmawr which takes the railway over the county boundary from Monmouthshire into Brecknockshire. However the emphasis with the local authority is that this phase will serve as a community link, rather than a tourist attraction.[12] 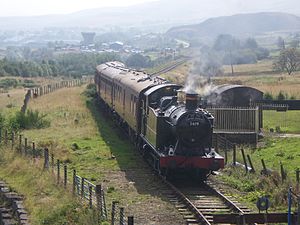 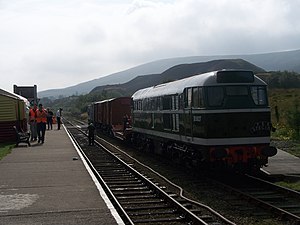 With extensions southwards to Varteg and beyond, it has been found that the deck of Varteg Road bridge was beyond economical repair, and could not simply be refurbished as was the case with the other bridges on the line. The local authority replaced the deck with two new bridges, one for the railway, and the other for the cycleway in April 2011.

Presently it is currently impossible to advance more than about 400 yards before coming into conflict with the cycleway. Torfaen Council has recognised the railway's potential to expand toward Talywain and beyond and have included this within their local development plan. This will also allow for route sharing to accommodate both Cycle Route and future line proposals whilst ensuring measures are taken to minimise any conflict occurring in dual operation.[13]

Southward expansions to Wainfelin may be jeopardised by recent land reclamation schemes presented by Spring UR Ltd. These plans require the swift destruction of the prominent Big Arch,[14] a brick-lined tunnel structure built in 1879 and already a Grade II listed structure.[15] The plans opt for its demolition in order to breach the disused railway embankment, this would create a wider access route for heavy road traffic for open-casting west of Talywain village to commence.

Not only would this prevent future line extensions but impede the Celtic Trail cycle path altogether as well. Whether a more beneficial plan for the surrounding area, or alternative put forward by the Torfaen Council, is currently unknown as these proposals are still in the early stages of public meetings.[16]

After Pontypool (Wainfelin), any further restoration of the original route down the valley is now virtually impossible as the line through Pontypool to Newport via Clarence Street was lost in the 1980s to the construction of the A4043 bypass. Retail development such as Tesco now occupies the site of Pontypool Crane Street station, but however, the preservation society managed to rescue this up-platform station building by painstakingly deconstructing brick-by-brick and stored onsite for eventual re-construction. As of January 2014, the stonework has and still being used to decorate the new station building at Furnace Sidings.