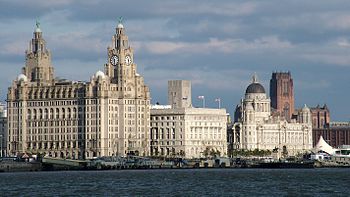 The Liverpool Maritime Mercantile City is the waterside centre of the City of Liverpool in southern Lancashire, and a UNESCO-designated World Heritage Site. The designated are comprises six locations in the city centre of Liverpool including the Pier Head, Albert Dock and William Brown Street,[1] and includes many of the city's most famous landmarks.

The sites were given World Heritage Status in 2004 attributed to their representing 'the supreme example of a commercial port at a time of Britain's greatest global influence'.[2] In 2012, the site was inscribed on the List of World Heritage in Danger due to the proposed construction of Liverpool Waters project. 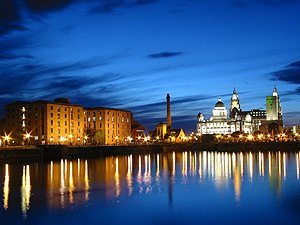 The Albert Dock at night

The sites were noted by UNESCO as follows:

The Liverpool Maritime Mercantile City comprises six separate locations throughout the centre of the city, each of which relates to a different component and time in the Liverpool's maritime history.[3] The inscripted sites extend for approximately 4 km north-south along the city's waterfront and stretch approximately 1 km east-west.[4] In total they cover an aggregate area of 336 acres.[5] 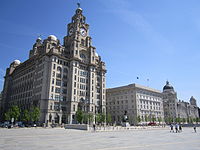 The Three Graces, from landward

The Pier Head is the focal point of Liverpool's waterfront and is dominated by three of its most recognisable landmarks, which are collectively referred to as the Three Graces:

The 'Three Graces' stand as a testament to the great wealth in the city during the late 19th and early 20th century when Liverpool was one of the most important ports in the world.[6] In the early twentieth century ideas were put forward for a 'fourth grace', in particular a proposal by the architect Will Alsop for a building known as The Cloud, which thankfuluy was rejected in 2004. Today, in what would have been its place, a new Museum of Liverpool opened on 19 July 2011.[7][8]

Behind the Port of Liverpool building is the art deco George's Dock Ventilation Tower, whose design is heavily influenced by Egyptian architectural styling.[9] Also a part of the site is the old George's Dock wall, which dates from the late 18th century, as well as several memorials, including one built to honour the engineers who remained at their post as the RMS Titanic sank.[10]

The Albert Dock is a complex of dock buildings and warehouses located to the south of the Pier Head. Designed by Jesse Hartley and Philip Hardwick and opened in 1846, the Albert Dock warehouses were the first in the world to be entirely fireproof, due to their construction from only iron, brick and stone, with no structural wood.[11] The dock was home to many advances in docking technology including being the first to have hydraulic cranes.[12] During Second World War the buildings suffered significant damage and general docking decline in the city after the end of the war saw them fall rapidly into disrepair. In the 1980s the area underwent massive regeneration after the creation of the Merseyside Development Corporation and the complex was reopened to the public in 1984, as part of the tall ships festival. Today they form a focal point for tourism in the city, being home to Tate Liverpool, Merseyside Maritime Museum and The Beatles Story. They also constitute the largest single collection of Grade I listed buildings anywhere in the UK.[13]

The Stanley Dock Conservation area is located to the north of the Pier Head and includes huge swathes of Liverpool's docking heartland. Within the site are several docks including Stanley Dock, Collingwood Dock, Salisbury Dock and Clarence Graving Dock; parts of the Leeds Liverpool Canal and associated canal locks; and many smaller features such as bridges, bollards and capstans.[15] Two of the Clarence Graving Docks are notable as the oldest docks still in use in the city today, dating back to 1830, although their full development wasn't completed until 1848.[16] Amongst the buildings in the area are the Victoria Clock Tower and Stanley Dock Tobacco Warehouse, one of the largest brick buildings in the world.[17] 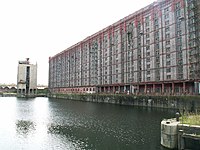 The Ropewalks site comprises the south western component of the Duke Street conservation area, as well as two warehouses on College Lane and Bluecoat Chambers on School lane. The location was one of the first areas in the city to develop when Liverpool was an emerging port,[18] with Bluecoat Chambers being the oldest surviving building in Liverpool city centre, dating back to 1715.[19] Its proximity to the Old Dock, the world's first enclosed wet dock,[20] meant it was the location of the city's first property speculators who built both warehousing and residential premises along Duke Street, Hannover Street, and Bold Street. The area soon developed a cosmopolitan feel being home to various types of people including sea captains, merchants, traders and artisans. Today the area is known as Ropewalks, a reference to the large number of roperies present in the area when Liverpool was one of the busiest ports in the world during the 18th and 19th centuries.[18]

This part of the World Heritage Site is focused around what would have previously been mediæval Liverpool and includes Castle Street dominated by Trials Hotel at one end and the Town Hall at the other linking Old Hall Street by Exchange Flags, Victoria Street, Water Street and Dale Street. Today a centre for commercial activity in the city, the area was included due to the nature of its street development over three centuries and the grandeur of its architecture and monuments.[21] 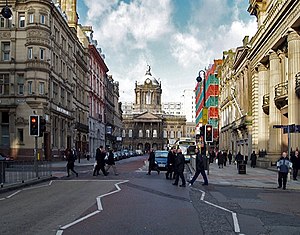 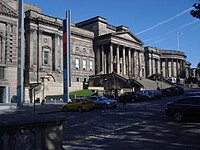 The William Brown street area is the central point for many of Liverpool's civic buildings forming a so-called 'cultural quarter'. Amongst the buildings that are focal to this part of the WHS are St George's Hall, Lime Street Station, the Walker Art Gallery, the World Museum Liverpool, the former Great North Western Hotel and the entrance to the Queensway Tunnel.[22]