Acaster Malbis is a village and parish in the West Riding of Yorkshire, within the Ainsty wapentake. It is located on the River Ouse, almost five miles south of York. Nearby are the villages of Copmanthorpe, two miles to the north-west, Bishopthorpe, the same distance to the north and Appleton Roebuck, 3½ miles to the south-west. The parish covers an area of about 2,000 acres.

The Latin word for a camp is 'castra' indicating that the Roman army may once have been based here. The village is mentioned in the Domesday Book as "Acastre". The 'Malbis' is derived from the Norman Malbysse or De Malebys family. Malbis was a Norman personal name that in French means "very swarthy".[2]

There was a Royal Air Force station in the village during and immediately after the Second World War.

According to the 2001 census the parish had a population of 578, increasing to 669 at the 2011 Census.[1] There are two churches and an inn in the village. The village is also the home for a holiday park.

The land on which the village stands was named by the Romans as Val-Caester. In Latin, Val means "a wall" and Castrum means a "camp".[3] When the Romans departed the land was acquired by an Anglo-Saxon called Aca.[4]

The village is mentioned in the Domesday Book as Acastre in the wapentake of Ainsty and was recorded to belong to two men, Elsi and Robert.[5][6] Ownership passed to the Malbysse family during the reign of Richard I. The family held the lands for about 200 years. In 1190, Richard Malebysse was a leader involved in the massacre of the Jews at Cliffords Tower in York. Richard I dismissed the sheriff and constable of York and imposed severe penalties on the city and arrested many of those who had taken part. Richard Malbysse had been described by a Hebrew scribe eight years earlier as "the evil beast". As punishment, the King ordered his estates seized into the king's hand and two of his esquires were thrown into prison.[7]

During the Civil War, the city of York was under siege from Scottish and Parliamentarian Armies. They had settled around the city in a great arc, with Lord Thomas Fairfax's army to the east and the Scots to the south and west. A bridge of boats, similar to those constructed at Nether Poppleton, was constructed over the River Ouse at Acaster Malbis to allow communications between the two armies.[8]

RAF Acaster Malbis, situated between the villages of Acaster Malbis and Acaster Selby, was commissioned in 1942. Originally it was a grass airfield used by the No 601 Squadron Auxiliary Air Force from 6 January 1942 until April of that year. They flew American Bell P39 Airacobra fighter planes. From 6 April 1942 until the beginning of 1943 No 15 Pilots Advanced Flying Unit was established here to train recently qualified pilots to convert to twin-engine aeroplanes using the Airspeed Oxford aircraft.

On 25 January 1943 the airfield was reconstructed into a full size 'Class A’ bomber station, with three concrete runways, steel hangars and new administration buildings. Initially the airfield was used as a relief landing ground for heavy bombers stationed at Rufforth and Marston Moor. From November 1944, No 4 Aircrew School took over for pilots, navigators, and air gunners to complete their ground training whilst waiting for a posting to a squadron. In 1945 there were between 200 and 300 RAF personnel living on the camp.

After the end of the war, RAF Acaster Malbis was home to No 91 MU (Maintenance Unit) who were responsible for the storage and disposal of vast amounts of ammunition. This function was not complete until well into the 1950s. RAF Acaster Malbis was decommissioned in 1963 and the land sold by public auction. It resumed operations as a private airfield in the mid-1970s until the mid-1980s. Large parts of the runways have since been dug up and the buildings have fallen into disuse with many being demolished, although one hangar and the control tower still remain.[9] 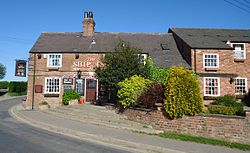 There are few amenities in the village save for the 17th-century public house, The Ship Inn. This Inn features in the book, The Girl with the Red Suspenders by Barbara Whitehead.[10] The inn reopened in May 2009 after nine months of major refurbishment, following serious flooding when the River Ouse burst its banks.[11]

The owners of the inn have reported a number of ghostly incidents.[12]

Harrogate Coach Travel operate a service through the village as part of the York Askham Bar to Tadcaster route.[13]

Acaster Malbis used to have brick-built school, founded by John Knowles in 1603.[5][14] As of 2010, primary education is provided at Archbishop of York's CE Junior School[15] in Bishopthorpe.

The village is in the Secondary School catchment area for Fulford School and Millthorpe School in York and also for Tadcaster Grammar School.[16]

There are two churches in the village. Holy Trinity Church, the Church of England parish church, stands on the site of the original Norman Church. In 1360 the estates of the Malbysse family passed into the hands of the Fairfax family, who pulled the old church down. The church stands a little way out of the village on the road to Bishopthorpe.[5] It is a Grade-I listed building.[17]

There is also a Methodist Church in the centre of the village, founded in 1880.[5]