Bilbrough is a village and parish in the West Riding of Yorkshire, six miles south-west of York, within the Ainsty wapentake. The Ainsty is named after Ainsty Cliff at Bilbrough, which was presumably its original meeting place. According to the 2001 census the parish had a population of 319, increasing to 348 at the 2011 census.[1]

The name means "The fortress of Bila", a personal name — probably Anglo-Saxon — not recorded but suggested by numerous other placenames.[2] 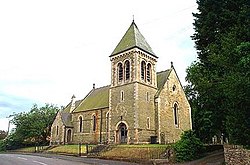 The village and the surrounding Parish has an area of 1,390 acres and was mostly the property of the Fairfax family from the 14th century onwards. Thomas Fairfax, parliamentary commander-in-chief during the Civil War, is buried here in a tomb inside the Fairfax Chapel within the village church, beside his wife Anne, daughter of Lord Vere, Baron of Tilbury.[3] Other notable landowners of the Parish included Richard Basy, an MP for York in the late 13th century.[4]

Bilbrough Manor, built in 1902 for Guy Thomas Fairfax, is a Grade II listed building.[5] The original Manor House, now a farmhouse, was built in 1670 for Thomas Fairfax. It is known that the former MP and Lord Mayor of York, Admiral Robert Fairfax, resided at this Manor. It was destroyed by fire in 1832.[6]

The village is the subject of a 17th-century poem, Upon the hill and grove at Bilbrough, written by English metaphysical poet and politician, Andrew Marvell.[7]

The village is set amongst fields and farmland north of the A64 road on lateral moraine made of boulder clay and gravel, some 150 feet above sea level.[8] A flyover which affords access to the village was opened on 9 June 2005 by the then Roads Minister Dr Stephen Ladyman, replacing an earlier junction that was a known accident blackspot. Close to the flyover, at either side of the A64, there are small service stations, hotels and fast food restaurants.[9]

To the west of the village is Ingle Edge Hill with views to Marston Moor and Towton. Close by is an tumulus of an ancient chieftain that faces towards Leeds.[6] The main street in Bilbrough is home to The Three Hares public house and a parish church which dates back to Norman times. The village hall offers community events.

The present church is Norman in style and was built in 1876 by Thomas Fairfax upon the remains of the original. There was also a Wesleyian Chapel built in 1836.[6]