The Falls of Clyde is the collective name of four waterfalls) on the River Clyde near New Lanark in Lanarkshire.

The Falls of Clyde comprise four "linns" (a Scots word for rapids of a waterfall, from the Old English hlynn):

Corra Linn is the highest of these, with a fall of 90 feet. Bonnington Linn (30 feet), Corra Linn and Dundaff Linn are above New Lanark and located within the Falls of Clyde Reserve managed by the Scottish Wildlife Trust. Stonebyres Linn is several miles downstream from the reserve and New Lanark.

The area has long been a popular destination for visitors. The Wordsworths, Coleridge and Sir Walter Scott all visited the Falls. In 1802, William Wordsworth immortalised Corra Linn, the largest of the waterfalls, in verse. Corra Linn has also been painted by a number of artists, including J M W Turner. The name is argued to comes from a Gaelic word 'currach', a marshy place, but legend gives 'Cora' as a daughter of King Malcolm II, who leapt to her death here whilst trying to escape imagined danger.[1]

Near Corra Linn is the Pavilion, built by Sir John Carmichael of Bonnington, probably in 1708. The Bonnington Pavilion had mirrors on its back wall, and when the doors were opened visitors had the illusion of standing beneath the falls. The 15th century Corra Castle is next to Corra Linn. It is now home to a family of rare bats. Corra is Gaelic for "weir", and as Corra Castle's early history is vague, some historians believe it was an early possession of the Weirs, the principle landowning family in the County after the dukes of Hamilton from the thirteenth to nineteenth centuries. Corehouse, built in 1844, the home of the Cranstoun family, is nearby. At Stonebyres Linn the ruins of 15th century Stonebyres Castle may be seen. 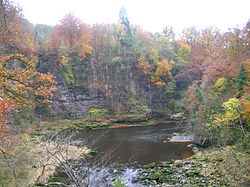 The natural amphitheatre at the base of Corra Linn

The Falls of Clyde Site of Special Scientific Interest (formerly the Corehouse Nature Reserve), a part of the Clyde Valley Woodlands National Nature Reserve, is an area of mixed woodland, including semi-natural native oakwoods and some areas of conifer plantation. It provides suitable habitat for badgers, roe deer, and over 100 species of bird. The site is well known for its resident breeding pair of peregrine falcons, which are protected during the breeding season by Operation Peregrine, providing security for the birds and a chance for the public to view the birds through scopes and CCTV. On 22 October 2011 at 1500 GMT a very rare pine martin was spotted within the reserve and was photographed. Within the reserve the Clyde River is suitable habitat for Otters and Kingfishers as well as the protected Brook Lamprey.

The Falls of Clyde Visitor Centre, operated by the Scottish Wildlife Trust, features exhibits about the waterfalls, the woodland and the area animals, including a special bat display.