East Midlands Airport is an international airport in Leicestershire, and which to be found close by Castle Donington in that county. The airport lies between, and was designed to serve, three cities of the Midlands, namely Nottingham (15 miles) Leicester (18 miles) and Derby (14 miles).

Passenger numbers peaked in 2008 at 5.6 million, but had declined to 4.3 million in 2013 making it the 11th busiest airport in the UK by passenger traffic. A major cargo hub, it was the second busiest UK airport for freight traffic in 2013.

The airport has a CAA Public Use Aerodrome Licence (Number P520) that allows flights for the public transport of passengers or for flying instruction. The airport was created by the City Councios of Nottingham, Derby and Leicester, but today it is owned by the Manchester Airports Group (MAG), the largest British-owned airport operator, which is controlled by ten borough councils in South Lancashire and North Cheshire, the controlling stake held by Manchester City Council.

The airport was originally a Royal Air Force station, RAF Castle Donington, which was decommissioned in 1946. The site was purchased by a consortium of local government authorities in 1964, when a major programme of building work and runway investment was begun. The airfield was renamed East Midlands Airport to reflect the area it served, and it opened for passengers in April 1965.

East Midlands Airport replaced the smaller pre-war grass airfield at Derby Airport, Burnaston. Light aircraft later moved to a new site at Derby Airfield, Egginton. The original site at Burnaston has since been redeveloped as a Toyota car factory.

Derby Airways, which was in the process of being renamed British Midland Airways, moved its operations to the new airport and established its headquarters in nearby Donington Hall in Castle Donington, operating a network of domestic and international scheduled and charter flights at East Midlands. The airfield was established with basic requirements of a 5,850-foot runway, a 60-foot taxiway, a new hangar floor and aprons, and parking for 850 cars. Financially, it was not an instant success. However, the picture quickly changed, with the increased volume of cargo traffic soon demanding further development. In 1970, an agreement was reached on creating a new freight complex, and both the runway and the terminal were extended.

Expansion was swift, with a further runway extension to 7,490 feet and terminal upgrade in the late 1970s. During 1985, one million passengers used the airport for the first time, which necessitated yet another terminal extension. Following government legislation, the airport became a public limited company in 1987, distancing it from all-out control by the local authorities.

With growing passenger and cargo traffic, further expansion was proposed for the airport in 1992. However, despite the enthusiasm of the local authorities who owned the airport, the funds necessary were not raised, so in 1993 East Midlands became the first major regional airport in the UK to be privatised. National Express Group purchased the airfield for £24.3m and began to invest in airport facilities. A £20 million, extension to the runway was added to enable the airport to handle long-haul flights, and a new air traffic control tower was constructed, the second tallest in the UK at the time. National Express investment would eventually total over £77 million over an eight-year period.

DHL Aviation opened a new £35 million cargo facility on site in 2000, and in the same year a business park was constructed next to the airport. However, National Express Group announced its intention to concentrate on bus and rail provision, and sold East Midlands Airport, together with Bournemouth Airport, in March 2001 to Manchester Airports Group for £241 million.

The arrival of low-cost carriers in 2002 resulted in a sharp jump in passenger numbers, rising 36% in that year to 3.23 million. Go Fly established a hub at East Midlands, and the operation has been strengthened since the airline's absorption by easyJet. The majority of BMI operations were ceded to a new low cost subsidiary, bmibaby, in 2002.

Following increasing overcrowding at the terminal building, the airport facilities have been extended and remodelled. There are new short-stay car parks, but there are charges for drop-off outside the terminals. The arrivals hall has been extended, a new transport interchange has been created, and a new pier has been built to reduce 'across tarmac' walking to aircraft. 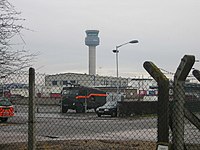 East Midlands Airport has established itself as a hub for low fare airlines and tour operators which serve a range of domestic and European short-haul destinations. It is also a base for BMI Regional, Flybe, Monarch and Thomas Cook Airlines. EasyJet ceased operating from the airport on 5 January 2010.[1] As a result of this redeployment, Bmibaby announced plans to expand its operation by 40% by basing three more aircraft at the airport by summer 2010.

A major development towards the long-haul programme came in 2005 with the introduction of holiday flights to the Dominican Republic, Orlando, and Cancún by First Choice Airways. The Indian resort of Goa has since been added.

On 28 August 2009, low fares airline Jet2.com announced that its seventh base would be at East Midlands Airport, starting with seven routes across Europe from May 2010 and two new winter routes from 20 December 2010 and have grown further since.

BMI had its maintenance base at the airport.

Until 1982, when the head office moved to Donington Hall,[2] British Midland had its head office on the airport property.[3]

It was announced on 13 April 2011 that Bmibaby would close its Manchester and Cardiff bases, moving an additional service to East Midlands Airport with increased frequencies and new routes for summer 2012. However just over a year later Bmibaby closed down and ceased all operations.

Since July 2013, Thomson Airways has operated with their Boeing 787 Dreamliner aircraft out of East Midlands, serving long haul holiday destinations such as Orlando or Cancun.[4]

The Aeropark at East Midlands Airport

The East Midlands Aeropark to the northwest corner of the airport has a large number of static aircraft on public display.

The museum and its exhibits are managed and maintained by the Aeropark Volunteers Association (AVA). It also offers two viewing mounds for watching aircraft arriving and departing from the main runway. AVA Members are allowed free access to the Aeropark. Exhibits include: