Dronfield is a town in north-eastern Derbyshire which lies between the town of Chesterfield and the city of Sheffield. It comprises the three communities of Dronfield, Dronfield Woodhouse and Coal Aston. It is sited in the valley of the small River Drone, with easy access to the Peak District.

Dronfield is known to have been in existence before the 1086 Domesday Book, and has a 12th-century parish church. In 1662 King Charles II granted the town a market, although this later ceased.

The industrial history of the town includes coal mining, the wool trade, the production of soap and steel, and engineering. Today a range of manufacturing firms still operate within the town. Dronfield's population has increased dramatically in post-war years from 6,500 in 1945 to its current size of just over 21,000.

Dronfield is a market town, but little is known about its early history. It is known to have been in existence before the 1086 Domesday Book and suffered after the Norman Conquest when William the Conqueror sought to bring the north of England under control in the "Harrying of the North".

The Church of St John the Baptist is known to have been built by 1135 when Oscot was rector with the parish of Dronfield covering Little Barlow, Coal Aston, Povey, Holmesfield, Apperknowle, Dore and Totley. Its churchyard contains the stump of a preaching cross which may be Anglo-Saxon; if so, it would pre-date the main church.

The Guild of the Blessed Virgin Mary was established in 1349 in the hall of the chantry priests. However, due to the Dissolution of the Monasteries and the subsequent suppression of the guilds and chantries in 1547, it became a local inn which still operates today as the Green Dragon Inn.

Between the 16th and 19th centuries, Dronfield grew around various industries, the most widespread of which was coal mining with pits at Stubley being mentioned in the 16th century and a map of Hill Top in the 17th century shows some workings. Further mines were opened at Coal Aston in 1785 and Carr Lane in Dronfield Woodhouse in 1795.

The town also benefited from trade with the lead mining and grindstone industries in the Peak District. The wealth of the Rotheram family, who became the Lords of the Manor of Dronfield, was based on the lead trade. Notable buildings in the town include several 16th- and 17th-century houses.

During the 16th century, Dronfield with its sheep farmers had a significant number of families working in the wool trade, engaged in spinning and weaving and also the production and selling of cloth. Soaper Lane was the centre of the soap-making and tanning industry in town, being next to the river, with a dye works also situated there.

In 1662 Dronfield was granted a market by Charles II, but in the 18th century, due to the nearness of Sheffield and Chesterfield, the market went into decline and ceased to exist.

In 1882, William Cammell's steelworks, which specialised in rolling rails, was 'removed' to Workington in Cumberland.[1] Steelworkers and their families moved too. It is estimated that 1,500 townsfolk made the trip to Workington. 'Dronnies', as the people of Workington called the newcomers, formed Workington AFC in 1888.[2]

In 1993 Dronfield Henry Fanshawe School (formerly the 'Dronfield School' and previously 'Dronfield Grammar School') suffered major damage when its 'modern' 1960s system built blocks were completely gutted by fire, requiring all firefighting resources from all nearby towns and Sheffield to control the blaze. The historic Victorian quadrangle and library, as well as the sixth-form block, survived. The remains of the modern school was subsequently demolished and mobile cabins were used as classrooms until 1996 when the school was rebuilt. 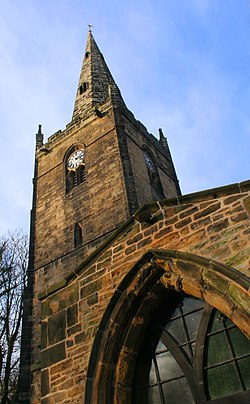 Built in the 12th century, the parish church of St John the Baptist is built following the style of early Gothic architecture and features a number of stained glass windows. Its spire can be seen from most of Dronfield. It has its own choir and its own music group run by young members of the church.

St John has two misericords, both 20th-century additions (one of the stalls bears the inscription "To the glory of God and in memory of Nellie Gertrude Lucas of Red House, Dronfield, these clergy desks were given by her husband, Easter 1923"):

Despite its recent growth, Dronfield's centre has managed to keep its ancient character with a number of historic buildings still intact. These include Dronfield Manor which is now the town's library, Dronfield Henry Fanshawe School which was established in 1579 through a bequest in the will of Henry Fanshawe (which was implemented by his nephew Thomas Fanshawe), and a 15th-century building with a king post roof, long used as a barn. The 12th-century parish church exhibits a fine 138-foot spire. 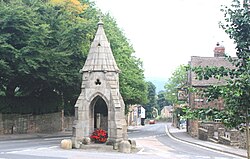 The Peel Monument on the High Street

The "Peel Monument", situated on the town's High Street, was built in 1854 out of gritstone as a tribute to Sir Robert Peel, to commemorate his repeal of the Corn Laws in 1846. The monument is very distinctive, and is often portrayed in images of the town.

Near to the Peel Monument on High Street is a 16th-century house known as 'The Cottage'. It is believed that it was once owned by Lord Byron (1788–1824), though there is no proof that he was a Dronfield resident.

Off Callywhite Lane, Cliffe Park has a number of amenities for local residents including a children's adventure play area, tennis courts and a bowling green.

The River Drone is a small river that runs through Dronfield. It then joins the Barlow Brook at Unstone, and then flows into the River Rother at Whittington Moor, Chesterfield.

In January 2010, a new £2.5 million sports complex opened on the old Gosforth School site. Run by three local teams, AFC Dronfield, Dronfield Town & Dronfield RFU, the complex included a state-of-the-art 3G pitch, 10 full-size pitches, superb changing facilities and a social area. It is being hailed as the best facilities in the north for amateur level sports. It was officially opened by Sir Trevor Brooking and John Owen.

Gosforth Fields is the home of Dronfield Rugby Club.[3]

The town's football ground, located next to the Coach and Horses pub, is now home to the world's oldest football team, Sheffield FC.

There is a rugby league side that goes by the name of Dronfield Drifters RLFC.

The cricket pitch on Stonelow Road is the home of the local Coal Aston Cricket Club. The ground has high-quality facilities including home and away changing rooms, a tea room, an electronic scoreboard, a seating area in front of the pavilion and an astro-turf practice net.

Dronfieldonline is a locally run website, providing information online for the Dronfield community. It contains information about the area, including schools, property, local news, events provided by and for the people of Dronfield, and links to local clubs and associations. The site also has a full business directory and fully supports local business and enterprise.

The Dronfield 2000 Rotary Walk is a 14½-mile circular walk that circumnavigates the town.