Attenborough is a village and ancient parish that forms a suburb of Nottingham. It is located to the south-west of the city, between Long Eaton (in Derbyshire, to the south-west) and Beeston (to the north-east). The population of the ward taken at the 2011 Census was 2,328.[1] It adjoins the suburbs of Toton to the west and Chilwell to the north.

Attenborough Nature Reserve is a series of gravel pits, which were flooded after gravel extraction and are now a haven for birds and other wildlife.

The main commercial centre of Attenborough is around the junction of Nottingham Road (the A6005) and Attenborough Lane.

Nearer to the nature reserve is a tennis club, along with a private day-nursery,[3] which, in 2005, along with the Attenborough Prep School, was bought by Robert Everist, who then sold the nursery and closed the 100-year-old school. Media coverage claimed Everist's company had pressured employees into handing in notice a week before closing the company.[4] The Attenborough Cricket Club (which doubles as the village green) and St Mary's Church (a Church of England parish church).[5] This southeastern part of Attenborough is bounded to the northwest by the railway line/and to the other three sides by the wetlands of the nature reserve. It is the historic part of the village, with two listed buildings and the listed church itself.[6]

Some time ago, a hoard of Roman coins was found on the footpath that runs over the railway and onto Barrett Lane.

The village was flooded in November 2000. In 2006, plans were drawn up for substantial flood defences for the village. However, the scheme proved controversial because of the impact of a proposed high flood wall along The Strand. After a series of negotiations, planning permission was granted in August 2010, with the defences being moved to behind the village green. The work was completed in summer 2012.[7] 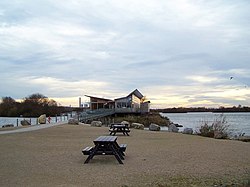 Attenborough was known in Saxon times as Addensburgh. It was the home village of Henry Ireton (1611 – 26 November 1651), a general in the army of Parliament during the Civil War and son-in-law of Oliver Cromwell.[8]

During the First World War, the railway station had its platforms extended as it was used as an interchange for soldiers heading for Chetwynd Barracks. During the Second World War, the platforms were said to be the longest in Europe due to their proximity to the base.

In the graveyard of St Mary's Church there is a memorial to the 134 people killed on 1 July 1918 in an explosion in the shell factory in nearby Chilwell. This death toll remains the largest number of deaths caused by a single explosion in mainland Britain. [9][10]

A ferry (Barton Ferry) used to cross the River Trent from the mouth of the River Erewash (near Attenborough) to Barton in Fabis. A crossing existed at this point since before 1774.[11]

Road transport is the primary method of transport in and out of the area which is connected to Nottingham by the A6005. East Midlands Airport is approximately ten miles away; the airport serves domestic and international routes, focused mainly on European routes.

An hourly service is provided throughout the day from Attenborough station on the Matlock to Nottingham service. Additional services run at peak times.

Beeston railway station is approximately two miles away. It provides regular and direct connections to various locations across the United Kingdom.