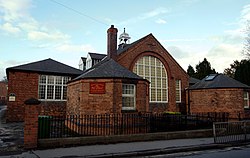 Spondon is a village and ancient parish that forms a suburb of the city of Derby. Originally a small village, Spondon dates back to the Domesday Book and it became heavily industrialised in the 19th and early 20th centuries, with companies such as British Celanese.

The name Spondon is Anglo-Saxon and describes a gravelly hill. The village is mentioned in the Domesday Book of 1086.[2] In about 1333,[3] a great fire, starting at The Malt Shovel, a local pub, and aided by an easterly wind, swept through the village destroying the church and all but a few houses, with just one casualty, the mayor. The damage was so great that a judge, Roger de Bankwell, was sent to hear pleas for relief from taxes.[3] The Great Fire of Spondon is still commemorated and taught as part of the curriculum in local schools. A village fair was held on its 650th anniversary (circa.1990).

Spondon became heavily industrialised in the 19th and early 20th centuries, with companies such as British Celanese (later Celanese Corporation. The large site is now closed, but it initially made cellulose acetate in World War I and later other artificial fibres.

The community lies on the north slope of the valley of the River Derwent east of Derby and is divided by the A52 road, which separates the residential Spondon village area at the top of the hill from the heavily industrialised area at the bottom.

The industrial belt lies to the south of Nottingham Road/Derby Road (an old Roman road) as does the disused canal and the railway. These barriers separate the residential three-quarters of the village from its industrial quarter. The various industries have included a dye works, electricity generating station, two scrapyards, sewage works, British Celanese synthetic fibres works and a tannery.

Spondon holds a small number of chain shops but continues to support the business of many independent tradespeople too, including a men's barbers, a gift shop and a bakery. Chapel Street and Sitwell Street (in the centre) are the main areas of this retail activity. Dale Road (north-east) and Nottingham Road/Derby Road (south) also have a row of shops. There is an Asda superstore off Derby Road (south-west).

There are many clubs/groups/societies serving Spondon. The Spondon Village Festival (Carnival) was first held in 2010 and it was hoped that it would become an annual event combining carnival and fair but this has fallen through. Spondon won the Urban Community award from Britain in Bloom in 2005.

Facilities – one library, two social clubs, six public houses (the names and numbers have not changed since 1961).

The historic centre of the village is designated as a conservation area. Locko Park is a Grade II*-listed mansion dating from 1669. The Homestead is a large detached Georgian mansion on Sitwell Street. The Stone Archways in Park Road mark the entrance to the now demolished Spondon House. The Enoch Stone Memorial marks the spot on Derby Road where a notorious murder took place in 1856[4] although this is in neighbouring Chaddesden.

The Derby Canal (Derby – Sandiacre) opened in 1795, and enabled other industries. The canal closed in 1964. There was talk of reopening for leisure purposes, but without progress (in 2010).[5]

The Midland Counties Railway opened a line from Derby to Nottingham in 1839. This line became part of the Midland Main Line to London St Pancras railway station. Spondon railway station has a rather limited service towards both Derby and Nottingham.

The A52 'Borrowash by-pass' recently named Brian Clough Way, cuts through the village and provides express road (dual-carriageway) links to the west (Derby) and the east (M1 and Nottingham). Regional Cycle Route 66 links Spondon to Chaddesden and Alvaston.

West Park School represents the merger of the former Spondon School (seniors) (State Comprehensive) which was located on two adjoining sites. These sites being the 'upper school' (1960s, grey brick, concrete and glass) at the top of the hillside, the current site, and the 'lower school' (1970s, grey brick, brown tile, timber and glass) at the foot of the hillside, which burned down. The new name comes from the two roads which lead to it.

St Werburgh's Church dates from around 1390, replacing an earlier church destroyed by fire in 1340.[6] In the churchyard is an Anglo-Saxon cross dating from c.870.