The Port of Liverpool Building stands overlooking the River Mersey at the Pier Head in Liverpool, the great port city of Lancashire. It was formerly known as 'the Mersey Docks and Harbour Board Offices' and is more commonly known as 'the Dock Office'. It is a Grade II* listed building.

This building, standing 220 feet high, is one of the trio of grand buildings on the river front known as "The Three Graces", the others being the Royal Liver Building and the Cunard Building.[1] The Port of Liverpool Building is a Grade II* listed building. It is also part of Liverpool's UNESCO-designated World Heritage site known as 'Liverpool Maritime Mercantile City'.

The building was designed by Sir Arnold Thornely and F.B. Hobbs and was developed in collaboration with Briggs and Wolstenholme. It is in the Edwardian Baroque style and is noted for the large dome that sits atop it, acting as the focal point of the building. It is approximately rectangular in shape with canted corners that are topped with stone cupolas. The design is very similar to that of the slightly earlier Belfast City Hall, designed by Alfred Brumwell Thomas and built between 1898-1906.

The Port of Liverpool Building was constructed between 1904 and 1907, with a reinforced concrete frame that is clad in Portland Stone. The building was the headquarters of the Mersey Docks and Harbour Board for 87 years, from 1907 to 1994, when the company relocated to new premises at Seaforth Dock. In 2001 it was sold to Downing, a Liverpool-based property developer, and between 2006 and 2009 underwent a major, £10 million restoration that restored many original features of the building.[2][3]

At 220 feet, the building is the fourteenth tallest building in Liverpool. Like the neighbouring Cunard Building, it is noted for the ornamental detail both on the inside and out, and in particular for the many maritime references and expensive decorative furnishings.

In 1898 the Mersey Docks and Harbour Board decided to close down and infill George's Dock, which was located on the site of what is the Pier Head today.[4] The land was sold to the Liverpool Corporation in 1900, although the Board opted to keep the southern section so that they could build a new central headquarters for the company, having been previously located at various sites around the city, including the Old Custom's House.[5] 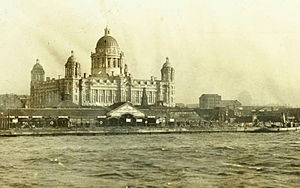 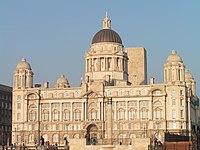 The Port of Liverpool Building today

In 1900 a committee was formed by the Mersey Docks and Harbour Board to plan and develop a new building for the company.[6] Under the leadership of Robert Gladstone, a competition was launched for local architects to submit designs for the new building. Alfred Waterhouse, a renowned local architect, was brought in to help judge the competition and prizes of £300, £200 and £100 were offered for the three best designs.[5] In total, seven entries were submitted, with the winning design being that of the architects Sir Arnold Thornely and F.B. Hobbs, which had been developed in collaboration with Briggs and Wolstenholme. Due to boundary changes of the land on which the building was to be built, amendments were made to the design, most notably with the central dome, which was only added at the last minute.[6]

In 1903, with the design now confirmed, William Brown & Son of Manchester won the tender for the contract to construct the new building,[5] and work began in 1904. The foundations, were dug to a depth of 30 – 40 feet below ground level,[5] the building's frame was built from reinforced concrete and then clad in Portland Stone,[6] a design that meant the building was more fire resistant than with other structural forms.[5] It was completed in 1907 at a cost of approximately £250,000,[7] although when the cost of furniture, fittings and professional fees was taken into account, the total cost was nearer £350,000. Staff from the Board's headquarters officially moved into the building on 15 July 1907, with staff from departments located in other areas of the city moving in throughout the rest of the year.[5]

During the Second World War, Liverpool's importance as a major port saw it become a target for the Luftwaffe and during the May Blitz of 1941, a heavy bomb exploded in the basement, on the eastern side of the building. The damage from the explosion was significant with the eastern wing being seriously damaged by fire. Nonetheless the building's structural integrity meant that much of the building could be re-occupied with only temporary repairs. In the aftermath of the war the building was fully restored; the cost of restoration exceeding the original construction costs.[5]

The building acted as the head offices of the Mersey Docks and Harbour Board (renamed the Mersey Docks and Harbour Company in 1972) for some 87 years. In 1994 the company moved to new headquarters at the Maritime Centre near Seaforth Dock in the north of the city, in order to be closer to what was now the centre of Liverpool's docking system.[5] However, the company remained the owners of the building until 2001 when it was acquired by Downing, a Liverpool-based property developer.

Plans submitted in 2005 for the restoration of the building were approved by Liverpool City Council. The scheme involved major internal and external work that would fully restore the Grade II* listed building. The plans included opening the building to the public, by creating a new viewing floor inside the dome and a publicly accessible sunken piazza on the riverside frontage that would provide a small parade of restaurants, cafes and shops.[8] A sixth level of the building, which had been "dismantled" in the aftermath of the Second World War, was also to be restored, providing a series of luxury apartments.[9] The first stage of the renovation was completed in early 2008, when the restoration of the Portland stone on the river facing side of the building was completed.[10] The £10m restoration project was fully completed in early 2009, when the last scaffolding was removed from the outside of the building and 20,000 square feet of refurbished office space was completed.[11] 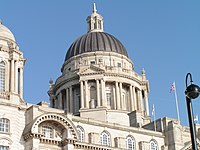 The Port of Liverpool Building is one of the Three Graces that line the Pier Head and the architectural features were designed to be reflective of Liverpool's importance to the maintenance of the British Empire.[5][12] However, the building that exists today is actually a modified version of the originally chosen design.[13] Initially, the plan had called for the main entrance of the building to be located on the south-west corner, but boundary changes to land on which it was to be built meant that the design was significantly revised to give it the symmetrical look it has today.[6] Notably, the initial design did not include the large dome that sits so prominently above the building today. Inspired by an unused design for Liverpool's Anglican Cathedral, which had been developed several years earlier, the architects added the dome to the design in order to give the building a more imposing look.[7][14][15] This decision, however, was not without controversy, as many board members believed that it should not be down to the Port Authority to "beautify the town".[5][16] Nonetheless, it was added to the design, becoming the focal point of the building itself.[15]

Designed in Edwardian Baroque style, the Port of Liverpool Building's structural form has been likened to those of Renaissance palaces.[16] Approximately 264 feet by 216 feet in size, the building rises to 220 feet in height,[5] making it the fourteenth tallest building in the city. Covering five floors, the main body of the building is 80 feet tall to the cornice.[5][12] The main entrance is located in the centre of the river-facing side of the building and is flanked by two three-metre-high stone statues of women representing "Commerce" and "Industry", which were designed by Charles John Allen.[12] Each corner of the building is canted and has a tall hexagonal turret that is topped by a stone cupola, which would have originally been crowned by a lantern.[15] 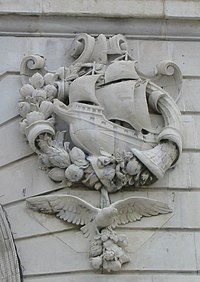 Maritime references in the building's decoration

The Port of Liverpool Building was constructed using a reinforced concrete frame, which not only made the building structurally strong, but also much more fire resistant than buildings in the past. As a result of being built on the site of the former George’s Dock, the building required deeper foundations than normal and in total some 35,000 tons of cement were used.[5]

Internally, the building's form centres on a full-height, octagonal hall that sits below the central dome. The hall has round, arched openings from the first floor upwards, providing large gallery spaces, whilst its floor is decorated with a mosaic depicting the points of a compass.[12] Office spaces are located off long central corridors, which are decorated with white Calcutta Marble.[5] A large portion of the building costs (approximately 25%) were spent on decorations and fittings; the inside of the building is lavishly decorated using expensive materials including mahogany from Spain and oak from Danzig for the woodwork, bronze for the floor furniture and fittings, and white marble for the floors and walls.[5] One noted interior feature is the grey granite grand staircase, which is lined with stained glass windows adorned with images of Poseidon, anchors, ships bells and shells and dedications to countries of the British Empire including Singapore, South Africa, Canada and Australia.[5][17]

The grand nature of the inside of the building's interior has meant that it has been used as a film set in several productions, including The Adventures of Sherlock Holmes.[18]

Throughout the building, there are numerous references to the sea and the maritime operations of both Liverpool and the British Empire. The main entrance gates are decorated with a globe supported by dolphins, while the cast iron gates and gate piers are decorated with mermaids, shells and anchors, and have shields with the initials "M.D. & H.B.".[17] The outside light fittings are designed such that the lights themselves appear to be held in the hands of the Roman God Neptune.[5] Similarly, the lifts are also decorated with maritime references, in the form of gilded emblems representing the globe, seahorses and anchors.[12] In the central hall, the frieze between the ground and first floor is adorned with the words of Psalm 107: "They that go down to the sea in ships that do business in great waters these see the works of the Lord and his wonders in the deep. Anno Domini MCMVII".[12]