Pocklington is a small market town situated at the foot of the Yorkshire Wolds in the East Riding of Yorkshire, approximately 13 miles east of York.

The town's skyline is dominated by a 15th-century tower of All Saints church. Pocklington lies at the centre of the ecclesiastical Parish of Pocklington, which also encompasses the small hamlet of Kilnwick Percy as well as a scattering of outlying farms and houses.

The town's architecture is a mixture of quaint old houses and modern buildings and the town has several unusual street names reflecting its history from the Iron Age onwards.

It is now considered to be a commuter town for York, Hull and Leeds. 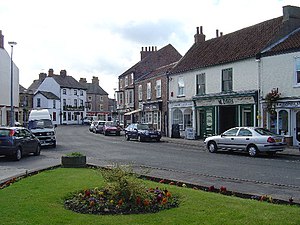 Pocklington is situated at the foot of the Yorkshire Wolds, hills which form the eastern edge of the Vale of York, and stretch from Pocklington 40 miles or so in a north-easterly direction to the east coast around Bridlington.

Geologically speaking, the whole area was originally under water, and, when the land rose, the chalk Wolds were formed from the skeletons and shells covering the sea floor. The landscape around Pocklington therefore varies from flat arable land primarily devoted to agriculture to the south and west, and grassy, limestone hills and valleys to the north and east. A lot of this lower farming country was originally reclaimed from marshland, from the Middle Ages onwards.

Crops grown include traditional arable crops seen elsewhere in the country but also include rape seed, turf and sugar beet. The last is a familiar sight being hauled by tractor in large open-top trailers to York, where it is used by firms such as Nestlé and British Sugar. Recent job cuts[1] have put this crop in jeopardy, although feasibility studies have shown that sugar beet could be used commercially to produce cleaner car fuel.[2]

Pocklington is bisected by the largely invisible (it now runs underground for much of its length) Pocklington Beck, a small stream that feeds into the Pocklington Canal. The beck and canal are usually good fishing grounds but a sewerage overflow in 2003 killed thousands of fish and severely damaged the ecosystem, from which it is still recovering.[3]

Churches within Pocklington include: 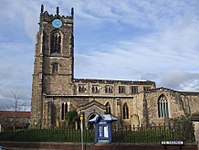 Pocklington gets its name via the Old English Poclintun: "Pocel's clan's village".[4] but though the town's name can only be traced back to around 650 AD, the inhabitation of Pocklington as a site is thought to extend back a further 1,000 years or more to the Bronze Age.

In the Iron Age Pocklington was the regional capital of the Parisii tribe.[5] By the time of the Domesday Book in 1086 it was the second largest settlement in Yorkshire, after York itself.

A large number of Pocklington residents are commuters to nearby cities York, Hull and Leeds. Of those who work within the local area, of those not employed within the cluster of town centre services, a number work on the Pocklington Industrial Estate (light industrial) and Pocklington Business Park (commercial). Leading employers include Bond International] (tyre distributors), Vebra, Ryedale Telecommunications and Phoenix Software. Agriculture is still a large employer, both directly in the form of farming, and also in secondary enterprises such as Yara Phosyn (Agrochemicals).

Day trippers also visit Millington Wood (a Site of Special Scientific Interest) and Pocklington Canal Head, with footpaths along the canal. The canal has been named one of the top ten places to see watery wildlife in Britain. Nearby Allerthorpe Lakeland Park has parkland for walking, a lake with watersports facilities, a separate lake for fly fishing, and a BMX trail. There is also a large caravan park for holidaymakers.

Well known for its windmills, which have been depicted by so many artists over the years, Pocklington has many ancient windmills which are still in working order, hence the town's nickname as "The Great Wind Factory".

The Pocklington Arts Centre, which opened in 2000, "offers a mixed programme of film, music, drama, dance, lectures, workshops and exhibitions".[7]

In a tribute to Munich's traditional Oktoberfest, Pocklington also hosts its own annual Pocktoberfest. Unlike the original on which it is based, Pocktoberfest is pared down to a single-issue event: beer. In the 2006 event, 19 casks (or about 452 litres) of ale were consumed.[8]

In 2006, Pocklington celebrated its second annual Flying Man Festival with a multitude of themed events from 12 to 14 May, in memory of the showman Thomas Pelling, the "Flying Man of Pocklington", who, with a pair of homemade wings, attempted a flight from the top of the local church, meeting his end when he collided with one of the church's buttresses.[9]