Diocese of Dublin and Glendalough

The broad Dublin area was Christian long before Dublin had a distinct diocese, with monasteries such as Glendalough as well as at Finglas, Glasnevin, Rathmichael, Swords amnd Tallaght. Several of these functioned as "head churches" and the most powerful of all was Glendalough.

In the early church in Ireland, the church had a monastic basis, with greatest power vested in the Abbots of the major communities. There were bishops but not organised dioceses in the modern sense, and the offices of abbot and bishop were often comprised in one person. Some early "Bishops of Dublin," back to 633, are mentioned in Ware's Antiquities of Ireland but the Diocese of Dublin is not considered to have begun until 1038, and when Ireland began to see organised dioceses, all of the current Diocese of Dublin and more was comprised in the Diocese of Glendalough.

The Norse Diocese of Dublin

In the Dark Ages, the town of Dublin was founded by pagan Viking invaders, who created the Kingdom of Dublin. In 943, King Sihtric of Dublin, known to the records also as 'Sigtrygg Caech' and his son Guthfrith ('Godfrey') became Christian, and the Kingdom of Dublin followed their lead. In the 11th century, King Sihtric Olafsson, who had been on pilgrimage to Rome, determined that Dublin would have a bishop of its own. He sent his chosen candidate, Donat (or Donagh or Donatus), to be consecrated in Canterbury in 1038, and the new prelate set up the Diocese of Dublin as a small territory within the walled city, over which Donat presided until 1074. The new diocese was not part of the Irish Church but a distinct Norse polity, and answerable to Canterbury, not to any Irish bishop. Sihtric also provided for the building of Christ Church Cathedral in 1038 "with the lands of Baldoyle, Raheny and Portrane for its maintenance."

At the Synod of Rathbreasail, convened in 1118 by Gillebert (Gilbert), Bishop of Limerick, on papal authority, the number of dioceses in Ireland was fixed at twenty-four. Dublin was not included, the city being described as lying in the Diocese of Glendalough, but the Norse Bishops continued, still attached to Canterbury.

The Reorganisation of the Church in Ireland, 1152

Then, in 1151, after the English conquest of Ireland, Pope Eugene III commissioned Cardinal Paparo to go to Ireland and establish four metropolitans, and at a general synod at Kells in 1152, Armagh, Dublin, Cashel, and Tuam, were created archiepiscopal sees. In a document drawn up by the then Archbishop of Tuam in 1214, the cardinal is described as finding both a bishop based in Dublin, who at the time exercised his episcopal office within the city walls only, and "He found in the same Diocese another church in the mountains, which likewise had the name of a city (Glendalough) and had a certain 'chorepiscopus'. But he delivered the pallium [the badge of an archbishop] to Dublin which was the best city and appointed that the diocese (Glendalough) in which both these cities were should be divided, and that one part thereof should fall to the metropolitan."

Part of what is now County Dublin, known as Fingall, was taken from Glendalough Diocese and attached to Dublin. The new Archdiocese had 40 parishes, in deanaries based on the old senior monasteries. Dependence of Dublin upon the English church was also ended.

The founding Archbishop of the larger Dublin Diocese, consecrated at Lambeth, was Gregory, with the Bishops of Kildare, Ossory, Leighlin, Ferns, and Glendalough reporting to him.

The second Archbishop, from 1161 to 1179, was Laurence O'Toole, later canonised by the Roman church; he had previously been Abbot of Glendalough, and had been elected as Bishop of Glendalough but had declined that office. During his time in office as Archbishop, the presence of the Church grew in Dublin city (by 1170 there were six churches other than the cathedral within the walls) and religious orders from the continent came to Ireland (Augustinians, Dominicans, Franciscans and Carmelites had houses in Dublin, and the great convent of Grace Dieu, near Donabate, was an example of women's religious life and education). As part of this trend, Laurence installed a community of canons to minister according to the Aroasian Rule in the Cathedral of the Holy Trinity, later known as Christ Church. The important house of Abbey of Saint Mary was founded in Dublin at that time, first under the Benedictine Rule, then passing to the Cistercians.

Not only was the Irish Church transformed in that 12th century by new organisation and new arrivals from abroad, but Ireland's political scene was changed permanently by the coming of the Normans and the influence of the English Crown.

Laurence's successor was a Norman, and from then onward to the time of the Reformation in Ireland, Dublin's Archbishops were all either Norman or English.

Merger of Dublin and Glendalough

In 1185, Prince John as Lord of Ireland ordered the dioceses of Dublin and Glendalough merged, but his was initially without effect as the charter lacked papal approval. When the bishop Macrobius died in 1192, a synod was held in Dublin under the direction of the papal legate Metthew O Enna. William Piro was elected as bishop of Glendalough and remained in office at least until 1212. Robert de Bedford was elected as successor in 1213 or 1214 but he had never the opportunity to take possession of the diocesan seat. Instead, John, now King of England, reissued his order to join Glendalough to Dublin which was finally approved by Pope Innocent III in 1216 and confirmed by his successor Honorius III in the same year.[1][2]

When the Church in England broke communion with Rome, the Church of Ireland soon followed, by an Act of the Irish Parliament. The Reformation took hold in Dublin and destroyed the relics of saints and images deemed idolatrous.

In 1801 the Church of Ireland was united to the Church of England and the Archbishop of Dublin gained a seat in the united House of Lords. This union lasted until the disestablishment of the Irish Church in 1871, after which the Diocese of Dublin and Glendalough remained, but no longer as part of an established church nor with representation in Parliament. 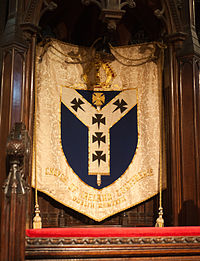 The united entity comprises 95 parishes, many now operating in unions. The parishes and other religious organisations in diocesan jurisdiction include: