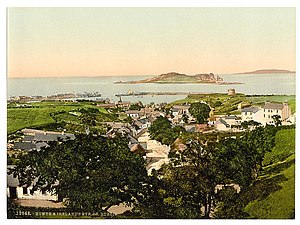 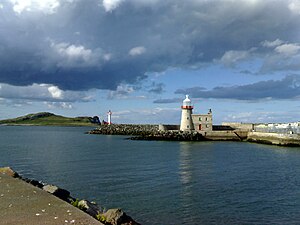 Panoramic view of Howth harbour in 2011 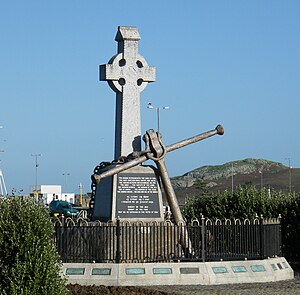 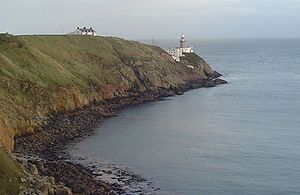 The Baily Lighthouse, on the eastern side of Howth Head viewed from the south-west 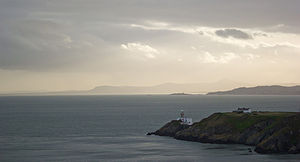 Howth is a village in County Dublin which forms an outer suburb of the city of Dublin. The district occupies the greater part of the peninsula of Howth Head, forming the northern boundary of Dublin Bay. Originally just a small fishing village, Howth with its surrounding once-rural district is now a busy suburb of Dublin, with a mix of dense residential development and wild hillside. The only neighbouring district on land is Sutton. Howth is also home to one of the oldest occupied buildings in Ireland, Howth Castle.

Howth has been a filming location for movies such as The Last of the High Kings and Boy Eats Girl.

Howth is located on the peninsula of Howth Head, which begins around 7½ miles east-north-east of Dublin, on the north side of Dublin Bay. The village itself is located nine miles from Dublin city centre (the ninth of a series of eighteenth century milestones from the Dublin General Post Office (GPO) is in the village itself), and spans most of the northern part of Howth Head, which is connected to the rest of Dublin via a narrow strip of land (or tombolo) at Sutton Cross.

Howth is at the end of a regional road from Dublin and is one of the two northern termini of the Dublin Area Rapid Transit (DART) suburban rail system. It is served by Dublin Bus.

The name Howth is thought to be of Norse origin, perhaps being derived from the Old Norse Hǫfuð ("head" in English). Norse vikings colonised the eastern shores of Ireland and built the settlement of Dublin as a strategic base between Scandinavia and the Mediterranean. Norse Vikings first invaded Howth in 819.

After Brian Ború, the High King of Ireland, defeated the Norse in 1014, many Norse fled to Howth to regroup and remained a force until their final defeat in Fingal in the middle of the 11th century. Howth still remained under the control of Irish and localized Norse forces until the invasion of Ireland by the Anglo-Normans in 1169.

Without the support of either the Irish or Scandinavian powers, Howth was isolated and fell to the Normans in 1177. One of the winning Normans, Armoricus (or Almeric) Tristam, was granted much of the land between the village and Sutton. Tristam took on the name of the saint on whose feast day the battle was won - St Lawrence. He built his first castle near the harbour and the St Lawrence link remains even today. The original title of Baron of Howth was granted to Almeric St Lawrence by Henry II in 1181, for one Knight's fee.

Howth was a trading port from at least the 14th century, with both health and duty collection officials supervising from Dublin, although the harbour was not built until the early 19th century.

A popular tale concerns the pirate Grace O'Malley, who was rebuffed in 1576 while attempting a courtesy visit to Howth Castle, home of the Earl of Howth. In retaliation, she abducted the Earl's grandson and heir, and as ransom she exacted a promise that unanticipated guests would never be turned away again. She also made the Earl promise that the gates of Deer Park (the Earl's demesne) would never be closed to the public again, and the gates are still open to this day, and reputedly, a place is set at table for unexpected guests.

In the early 19th century, Howth was chosen as the location for the harbour for the mail packet (postal service) ship. One of the arguments used against Howth by the advocates of Dún Laoghaire was that coaches might be raided in the badlands of Sutton! (at the time Sutton was open countryside.) However, due to silting, the harbour needed frequent dredging to accommodate the packet and eventually the service was relocated to Dún Laoghaire. George IV visited the harbour in August 1821.

On the 26 July 1914, 900 rifles were landed at Howth by Robert Erskine Childers for the Irish Volunteers. Many were used against the British in the Easter Rising and in the subsequent Anglo-Irish War.

The harbour was radically rebuilt in the late 20th century, with distinct fishing and leisure areas formed, and the installation of a modern ice-making facility. A new lifeboat house was later constructed, and Howth is today home to both the RNLI lifeboat service and the Irish Coastguard.

Howth Head is one of the dominant features of Dublin Bay, with a number of peaks, the highest of which is Black Linn. In one area, near Shielmartin, there is a small peat bog, the Bog of the Frogs. The wilder parts of Howth can be accessed by a network of paths (many are rights of way) and much of the centre and east is protected as part of a Special Area of Conservation of 570 acres.

The peninsula has a number of small, fast-running streams, three of which run through the village, with more, including the Bloody Stream, in the adjacent Howth Demesne. The streams passing through the village are, from east to west, Coulcour Brook, Gray's Brook or the Boggeen Stream, and Offington Stream.

The island of Ireland's Eye, part of the Special Area of Conservation, lies about ⅔ mile north of Howth harbour, with Lambay Island some three miles further to the north. A Martello tower exists on each of these islands with another tower overlooking Howth harbour (opened as a visitor centre and Ye Olde Hurdy Gurdy Museum of Vintage Radio on June 8, 2001[1]) and another tower at Red Rock, Sutton. These are part of a series of towers built around the coast of Ireland during the 19th century.

Howth Castle, and its estate, Deer Park, are key features of the area.

On the grounds of Howth Castle lies a collapsed Dolmen known locally as Aideen's Grave.

At the south-east corner of Howth Head, in the area known as Bail(e)y (historically, the Green Bayley) is the automated Baily Lighthouse, successor to previous safety mechanisms, at least as far back as the late 17th century.

In Howth village is St Mary’s Church and graveyard. The earliest church was built by Sitric, King of Dublin, in 1042. It was replaced around 1235 by a parish church, and then, in the second, half of the 14th century, the present church was built. The building was modified in the 15th and 16th centuries, when the gables were raised, a bell-cote was built and a new porch and south door were added. The St Lawrences of nearby Howth Castle also modified the east end to act as a private chapel; inside is the tomb of Christopher St Lawrence, 2nd Baron Howth, who died in 1462, and his wife, Anna Plunkett of Ratoath.

Also of historic interest is The College, on Howth's Main Street.

The area is active commercially, and forms part of the area of the Howth Sutton Baldoyle Chamber of Commerce.[2] Howth remains an active centre of the fishing industry, with some processing performed in the fishing harbour area, and some boat maintenance.

The village is also home to the Olympic Council of Ireland.

Howth, having once held at least five hotels, saw the last, the Deer Park Hotel, close in April 2014, although the premises continues to trade as a bar and base for the Deer Park golf courses with the recent addition of a 'FootGolf' course. The area has multiple bed-and-breakfast establishments.

The nearest operational hotel (The Marine) is located at Sutton Cross, approximately a mile and a half from Howth harbour.

Howth is a popular area for birdwatching and sailing, and is also popular with anglers. Anything from cod to ray can be caught from Howth's rocky shore marks, and sea mammals, such as seals, are common sights in and near the harbour. Howth is also a popular destination for cyclists, joggers and hillwalkers alike, particularly on weekends. Birds seen regularly include razorbill, guillemot, fulmar, kittiwake, stonechat, linnet, whitethroat, yellowhammer, skylark, wheatear, peregrine, buzzard and kestrel.

Among Howth's better-known residents are the Booker Prize-winning novelist John Banville, U2 drummer Larry Mullen, Actor Stuart Townsend, was born and raised in Howth. Senator and retail pioneer Feargal Quinn, writer Michael Feeney Callan and musicians Barney McKenna and John Sheahan of The Dubliners and Dolores O'Riordan of The Cranberries. Phil Lynott of Thin Lizzy lived in Howth for a time.[3] The late politician and writer Conor Cruise O'Brien and his wife, the Irish poet Máire Mhac an tSaoi lived here for many years. Composer Ciarán Farrell presently lives in Howth. Multiple Eurovision Song Contest winnerJohnny Logan and his father, tenor Patrick O'Hagan lived for many years in Howth, and Lynn Redgrave and husband John Clark raised their family there in the early 1970s. Bill Graham, journalist & author lived in Howth until his death in 1996. John McColgan and wife Moya Doherty, founders of Riverdance, have been resident in Howth for many years. William Butler Yeats spent some of his childhood in a small house above the cliffs on Balscadden Road in Howth. Broadcaster Seán Moncrieff lives in Howth with his family. Scott Young who was a Canadian journalist, sportswriter, novelist and the father of musicians Neil Young and Astrid Young lived in Howth in the late 1980s. Composer Brian Boydell was born in Howth in 1917. Current European Ombudsman Emily O'Reilly also resides in Howth with her family of seven. Actor writer and comedian Gary Cooke lived on the Claremont Road Howth in the 1970s and 1980s. The eminent judge Gerald FitzGibbon lived here for many years until his death in 1909: his house, Kilrock, was one of the centres of Dublin social life from the 1870s onwards. 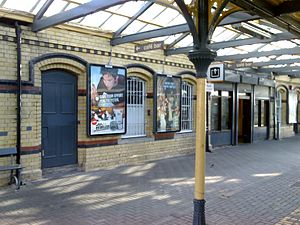 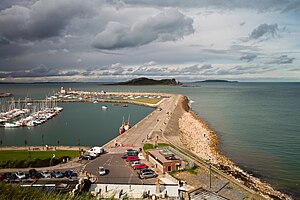 There's also a new bus route which started taking effect in 2013, the 31A, which takes an almost identical route to the 31, however does not stop at Howth Summit, but continues on to Shielmartin.