Sandymount is an affluent coastal suburb in County Dublin, to the south of Dublin city centre.

An early name for the area was Scal'd Hill or Scald Hill.[1] During the 18th century, there was a village called Brickfield Town on the site of Sandymount Green;[1] this took its name from Lord Merrion's brickfields, which stretched from here to Merrion at the time.[1]

Sandymount is located between two and two and a half miles south-east of Dublin's city centre. Sandymount Promenade runs along the coast road (Strand Road) from Sandymount Strand, down to Merrion Gates. It lies a little south of the Great South Wall in Dublin Bay.

The River Dodder passes nearby to the west, and three streams, the Elm Park, Nutley and Trimleston, come to the coast to the south, but any pollution of these impacts Sandymount Strand. In the past, the Nutley Stream came to the coast in what is now Sandymount, and severe flooding occurred on the old course in 1963.[2] 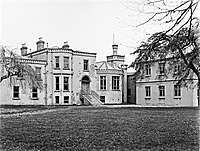 Sandymount Green is a triangular park located next to the village. The houses along the south side of the green are part of what once was Sandymount Castle and the roads behind this bear the name. There are shops, restaurants and cafés around the green.

The extensive Sandymount Strand is part of a sandbank known as the South Bull – a mirror to the North Bull sandbank, which grew into North Bull Island. The strand is a major component of the south side of Dublin Bay, and runs from curve of the bay at Ringsend to Merrion Gates. Sandymount Strand is a popular place for locals to take a walk. People and cars have been occasionally trapped by the incoming tide.

The promenade is a walkway a mile and a half long along the coast from Gilford Avenue to Saint Alban's Park, however, there are plans to lengthen the promenade to connect with the S2S Sandycove to Sutton Cycleway.[3]

About halfway along the strand is the Sandymount Martello tower, part of a system of defences built to warn of an invasion by Napoleon. The Tower was a popular café in the 1960s. An attempt to turn the tower into a restaurant led to the installation of a large window with roller blinds on the seaward side of the tower. The restaurant never opened, leaving the tower with the modified window, and landscaped exterior abandoned on the strand.

The area is also home to a house of the Franciscan Missionary Sisters for Africa.

Sandymount Strand is the most famous beach in Irish fiction, James Joyce based two episodes of his epic novel Ulysses here: