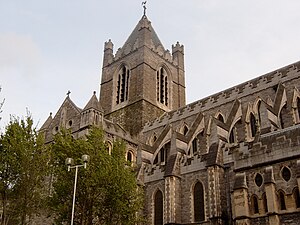 The head (or 'Metropolitan') of the Province is the Archbishop of Dublin.

Dioceses in the province

The province has five dioceses:

The province covers approximately the southern half of the island of Ireland, all within the Irish Republic, including the counties of Meath, Westmeath, Dublin, Kildare, Offaly, Laois, Wicklow, Wexford, Carlow, Kilkenny, Tipperary, Waterford, Cork, Kerry, Limerick, Clare and the southern half of County Galway. 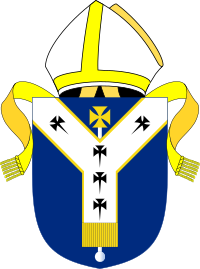 Arms of the Archbishops of Dublin

The Diocese of Dublin was formally established by Sigtrygg (or Sitric) Silkbeard, King of Dublin in 1028,[1] and the first bishop, Donat (Dúnán), was consecrated in about the same year.[2][3] The diocese of Dublin was subject to the Province of Canterbury until 1152. At the Synod of Kells, held in March 1152, Dublin was raised to an ecclesiastical province with the archbishop of Dublin having the jurisdiction over the Bishops of Ferns, Glendalough, Kildare, Leighlin and Ossory. In 1214, the dioceses of Dublin and Glendalough were united, which was confirmed by Pope Innocent III on 25 February 1216 and by Pope Honorius III on 6 October 1216.

After the Reformation, the Province of Dublin continued though its geographical area was adjusted and rationalised. At this time and until the 1830s, it was one of four provinces of the Church of Ireland: Dublin, Armagh, Tuam and Cashel, which served Leinster, Ulster, Connaught and Munster respectively.

In 1838, the Province of Dublin was united with that of Cashel, to create current Province. The Archbishop still bears the title, enjoyed since the Middle Ages, of "Primate of Ireland". His colleague the Archbishop of Armagh is "Primate of All Ireland".

Archbishops during the Reformation