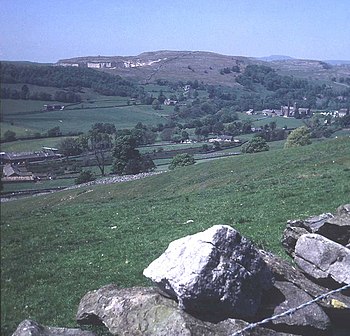 View across the Ribble to Giggleswick Scar 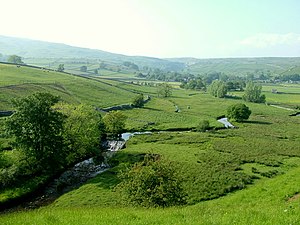 Craven is an area of Yorkshire, in the Pennine fells within the West Riding.

The earliest known description can be approximately deduced from entries in the Domesday Book completed in 1086 for William the Conqueror, in which several of the entries for Yorkshire landholdings bear the note "in Craven". The name is far older though, and is believed to predate even the Anglo-Saxon settlement of the area.

Thus Craven includes siome of Yorkshire's most picturesque Pennine landscape, in the upper reaches of Airedale, Wharfedale, Ribblesdale, with the Aire Gap and Craven Basin.

The name "Craven" is of uncertain origin, but an origin in the old British language is proposed, related to the word for garlic (craf in Welsh).[2] Another suggestion is the proto-Celtic *krab- suggesting "scratched" or "scraped" in some sense.[3] In civic use the name Craven or Cravenshire had given way to that of Staincliffe before 1166 yet the Archdeaconry remained Craven throughout.[4]

Craven’s extent cannot be defined with precision, but it encompasses lands in the Yorkshire Pennines including the upper reaches of Airedale, Wharfedale, Ribblesdale, the Forest of Bowland and the river Wenning of Lonsdale.

Through Craven pass several important low-altitude passes through the fells from Westmorland and beyond to the Vale of York. Even Neolithic long-distance trade is proved by many finds of stone axes from Westmorland.[5]

To the route’s north stand limestone mountains of up to 2,415 feet above mean sea level and to its south lie bleak sandstone moors, that above 902 feet grow little but bracken.

To walk the Pennine moors is "potentially dangerous if the weather is bad and you are ill equipped. If the cloud comes down you will need both a compass and a knowledge of how to use it."
—Jim Jarratt, 2006[6]

Craven was first made fully accessible to wheeled vehicles by the Keighley and Kendal Road, a turnpike that started in 1743.

The treeless moorland gives no shelter from storms. Even modern Pennine transport can find it a formidable barrier for roads can be blocked by snow for several days, but the Craven route is a welcoming sheltered passageway, and also inhabited along its length.

As the Ice age glacial sheets retreated from Craven ca 11,500 BC plants returned to the bare earth and archaeological palynology can identify their species. The first trees to settle were willow, birch and juniper, followed later by alder and pine. By 6500 BC temperatures were warmer and woodlands covered 90% of the dales with mostly pine, elm, lime and oak. On the limestone soils the oak was slower to colonize and pine and birch predominated. Around 3000 BC a noticeable decline in tree pollen indicates that Neolithic farmers were clearing woodland to increase grazing for domestic livestock, and studies at Linton Mires and Eshton Tarn find an increase in grassland species in Craven.[5]

On poorly drained impermeable areas of millstone grit, shale or clays the topsoil gets waterlogged in Winter and Spring. Here tree suppression combined with the heavier rainfall results in blanket bog up to 6 feet thick. The erosion of peat ca 2010 still exposes stumps of ancient trees.[5]

“In digging it away they frequently find vast fir trees, perfectly sound, and some oaks...”
—Arthur Young, 1771[7]

Vegetation in the Pennines is adapted to subarctic climates, but altitude and acidity are also factors. For example on Sutton Moor the millstone grit's topsoil below 902 feet has a soil ph that is almost neutral, ph 6 to 7, and so grows good grazing. But above 902 feet it is acidic, ph 2 to 4, and so can grow only bracken, heather, sphagnum, and coarse grasses such as cottongrass, purple moor grass and heath rush.[8] Dressing it with lime produces better quality grass for sheep grazing - such is named marginal upland grazing. This points to the advantage of Pastoral farming near Craven Fault where the lime is so available. 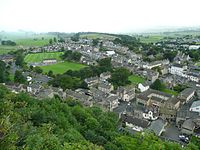 Craven has been the name of this district throughout recorded history.[10] Its extent in the 11th century can be deduced from the Domesday Book.[11]

The first datable evidence of human life in Craven is ca 9000 BC: a hunter's harpoon point carved out of an antler found in Victoria Cave near Settle. Most traces of the Mesolithic nomadic hunters are the flint barbs they set into shafts. Extensive finds of these microliths lie around Malham Tarn and Semerwater. Flint does not occur in the Dales; the nearest outcrop is in the East Riding of Yorkshire. On higher ground microliths are found near springs at the tree line at 1,600 feet indicating campsites close to the open hunting grounds. The valley woodlands were inhabited by deer, boar and aurochs, the higher ground was open grassland that fed herds of reindeer, elk and horse. No permanent settlements have been found of that age, hunting here was seasonal, returning to the plains in winter.[5]

After 5000 BC Neolithic long-distance trade is indicated by the distribution of stone axes many of which were of hard volcanic rock with a cutting edge made by polishing. Lithic analysis can identify their quarry source. Axes found in Yorkshire originate in Westmorland and are found as far as eastern Yorkshire suggesting they were traded for the flint there. But most finds are in Ribblesdale and Airedale indicating that Craven was their trade route through the Pennines. Farmers permanently settled in Craven, bringing domesticated livestock and used those stone axes to clear woodlands, probably by slash-and-burn, to increase areas for grazing[5] and crops.

In the first century the Romans built forts at strategic points, including Olenacum[12] at Elslack. Through this fort passes a Roman road linking two major centres: Bremetennacum at Ribchester in Lancashire and Olicana at Ilkley in Yorkshire. To the west of Craven another road has been proved to run north from Ribchester by way of Lancaster to the Roman Calacum near Kirkby Lonsdale. Although it seem inevitable that to complete the triangle there would be a third road direct from Olicana to Calacum, where the A65 now runs past Settle and Ingleton, indisputable traces of it have yet to be determined. However a Roman farm has been uncovered at Gargrave on that route.[5]

When the English established themselves in these dales in unknown, though place-name evidence suggests it was later than in lowland Yorkshire. The wapentakes of Staincliffe and Ewcross were established across Craven, the Forest of Bowland and as far north as Sedbergh. Placenames also suggest a heavy Norse settlement in Craven after the Viking Age. 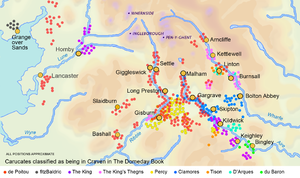 Page of the Domesday Book listing lands in Craven

After the Norman Conquest the new Norman nobility took large lordships in the dales, as is reflected in the Domesday Book. In Craven the wapentake names were not used in the record; only Craven, which includes lands further west than any later description, such as Melling, Wennington and Hornby in Lancashire, on the River Lune in Lonsdale.

Although that suggests the length, the Domesday Book does not demonstrate the width of Craven, for in it only arable land was noted. Ploughing is a minor part of Craven agriculture, although cultivators had probably been reduced further by the Harrying of the North. Most of Craven is uncultivable moorland and the valley bottoms are usually boggy, shady frost-hollows, with soils of glacial boulder clay very heavy to plough. So ploughing was limited to well-drained lower slopes. The higher slopes are so full of rock debris that grazing oxen is still the primary living in Craven, with some sheep marginal.[13] Because grazing land was not tallied in the Domesday Book, the full areas of the estates of the manors can only be estimated.

The areas of ploughland were counted in carucates and oxgangs: one carrucate being eight oxgangs and one oxgang varying from fifteen to twenty acres. This vagueness comes from an oxgang signifying the land one ox could plough and that varied with the heaviness of the local soil. A carucate was the area that could be managed with team of eight oxen. Craven suffered from raids by Border reivers out of Scotland; for example in 1318 they severely damaged churches as far south as Kildwick.[14]

In 1377, in the form of Poll Tax records, the earliest surviving detailed statistics of Craven were collected, showing incomes, various occupations, and the relative worth of villages and hamlets[15] in the wapentakes of Staincliffe and Ewcross which cover Craven and lands of the West Riding as far as Sedburgh to the north.