Whalley is a large village on the banks of the River Calder in Lancashire. It is overlooked by Whalley Nab, a large picturesque wooded hill over the river from the village.

The main road through Whalley is King Street, which leads through to Clitheroe Road. Neighbouring Whalley are the small villages of Wiswell, Billington, Barrow, and Read. Close by is Downham village and Pendle Hill, the highest in the county south of the sands, and faous for the "Pendle Witches".[1]

The parish church is St Mary and All Saints, which dates to 628 in the very early days of the Church in England, when St Paulinus of York was said to have preached at Whalley. 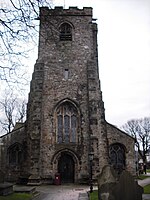 The church has a large number of notable misericords - eighteen 15th century and four Victorian, the former known to have originated at Whalley Abbey. The church-yard has three Anglo-Saxon crosses.[2] It also contains war graves of 8 servicemen of First World War and 5 of Second World War.[3]

A Roman Catholic church, The English Martyrs, stands near the site of the old Abbey.

The village has a total of 23 listed buildings at Grade I, II* and II. Until the 1980s there was a girls' boarding school called Whiteacre.

Known locally as "Whalley Arches", Whalley Viaduct is a 48-span railway bridge crossing the River Calder and a listed structure.

The Viaduct was built between 1846 and 1850 under the engineering supervison of Terrence Wolfe Flanagan. It is a red brick arch structure and the longest and largest railway viaduct in Lancashire.[4] It carried the Bolton, Blackburn, Clitheroe and West Yorkshire Railway 21.3m over the river for 620m. 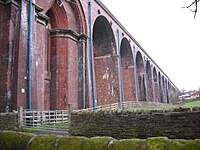 Whalley Arches, east side, from the road

Over 7 million bricks and 435,712 cubic feet of stone were used in construction. 9,800 feet of timber were used for the arch centring, temporary platforms and the permanent foundation piles. During construction on 6 October 1849, two of the 41 arches then completed collapsed, with the loss of three lives.

The east side of the bridge, nearest the remains of the Abbey, has the only decorative treatment.[5]

The village has the ruins of Whalley Abbey, a 14th-century Cistercian abbey. The monks of Whalley described the site of their abbey beneath Whalley Nab on the banks of the Calder as locus benedictus - a blessed place.[6]

The River Calder has a man-made weir section at Whalley, which supposedly allowed the monks of Whalley Abbey to collect water easily. It has been suggested that was one of the main reasons for the abbey being built where it was. The river here has two small islands made of pebbles and rocks.

The dam/weir was built to guide water to a channel that fed a water wheel in the mill (there is a sluice gate where the dam meets the channel, this turns the wheel on and off) this gave power to grind corn. The power to the mill was all belt driven through a pulley system. The mill has now been transformed into flats, but you can still see the remains of the wheel through an opening at the back of the building.

Shops and the village

Whalley has many independent shops, hairdressers, numerous take-aways and estate agents, a minimarket, pharmacy and wine shop. Barclays Bank has a branch on the main street. The centre of the town is dominated by four pubs - The Dog, The Whalley Arms, The Swan Hotel (established in 1780) and The DeLacy Arms. There is also a public library and a doctors' surgery.

In Whalley is the Calderstones Partnership NHS Mental Health Trust. The hospital was founded in 1915 as "Queen Mary's Military Hospital". It then became "Whalley Asylum" and eventually, from 1929 to 1993, "Calderstones Hospital".[7]

The hospital has a burial ground, at the end of which is the Whalley (Queen Mary's Hospital) Cemetery, containing 42 graves of Commonwealth service personnel (primarily military patients) - 33 from First World War and nine from Second World War - together with a memorial to nearly 300 servicemen who died in the hospital. The cemetery is accessible via the more recently established Ribble Valley Remembrance Park.[8]

A local club staged speedway meetings at Dean's Pleasure Grounds in the late 1920s. The track was very small and only two riders were allowed to race at any one time. A contemporary photo shows the track on flat land adjacent to a river and the showground with a helter-skelter. Today there are sports facilities including tennis courts, football pitches, a bowling green and cricket ground. In 1867, Whalley hosted the first Roses Match between Lancashire County Cricket Club and Yorkshire County Cricket Club at Station Road.

Whalley Pickwick Night (named after the Charles Dickens novel The Pickwick Papers) is an event in December of each year with people in Victorian costume to raise funds for charity. The first event was in the 1980s as a late night (6pm–9 pm) Christmas shopping event, and in more recent years has since expanded with stalls, indoor events and a church service.

The town participates with the adjacent village of Billington in "Billington and Whalley Brass Band Club."