Linton is a small and picturesque village in the West Riding of Yorkshire, in the Pennine area of the west of the Riding known as Craven. It is in Wharfedale, and within the Staincliffe Wapentake.

Linton stands to the immediate south of, and across the River Wharfe from, Grassington, near Threshfield and eight miles north of the market town Skipton.

The village green is set in the midst of the village, surrounded by a fine Vanbrugh almshouse, a pub and three stone bridges over its beck. Not far to its northeast, Linton makes a second impressive appearance, where Linton Beck runs down to the River Wharfe at the limestone Linton Falls, there bridged for walkers on a path up the Wharfe's north bank to Grassington.

Amidst the group of cottages close by the Falls is a charming, 14th century, packhorse bridge, 'Little Emily's Bridge', a few minutes' walk from the church of Saint Michael and All Saints. Dating from the 12th century, Linton Church (as it is usually called) spreads an apron of churchyard, decorated with buttercups and fine gravestones, upon a small river plain bounded by a bend to its east of the Wharfe, as it flows from the Falls toward Burnsall, along the Dales Way. Except at high water, the river is crossed near the churchyard by a much-photographed, ancient course of stepping-stones, below an old (now renovated) mill house.

The name "Linton" is from the Old English lin tun, meaning "flax farm".

Another 'Linton' is to be found much lower down on the River Wharfe, by Wetherby. 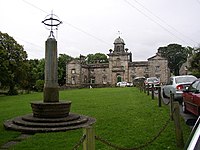 Fountaine Hospital, an almshouse designed by Sir John Vanbrugh, funded by a bequest from Richard Fountaine

Fountaine Hospital stands in the village, an almshouse designed by Sir John Vanbrugh, funded by a bequest from Richard Fountaine.

The ancient parish included the townships of Grassington, Hebden and Threshfield, each of which became a separate civil parish in 1866.[1]

On 30 October 2008, the Daily Mail reported that the Yorkshire Dales National Park Authority intends to redevelop the 99 year old water gate at Linton Falls as a hydroelectric plant.[2]

View of churchyard beside river and old mill site