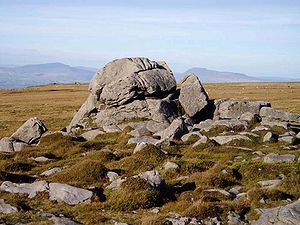 Ward's Stone; the highest point in the Forest of Bowland

The Forest of Bowland stretches across of the hills of western Pennines in the West Riding of Yorkshire. It is a moorland of barren gritstone fells, deep valleys and peat beds. The hills are known as the Bowland Fells.

Once described as the "Switzerland of England",[1][2] it has been designated an "Area of Outstanding Natural Beauty" since 1964

Less known and less visited than others of Yorkshire's dramatic landscapes, the Forest of Bowland boasts fine views, good, rough walking and rich grouse moors. Those who do visit the moors may enjoy shooting, walking and cycling.

The name 'forest' is used in its traditional sense of 'a royal hunting ground', and much of the land still belongs to the Duchy of Lancaster. In the past wild boar, deer, wolves, wild cats and game roamed the forest. Now the sheep are allowed some peace.

The hills on the western side of the Forest of Bowland attract walkers from across the land. The western hills form a large horseshoe shape with its open end facing west. Clockwise from above Lancaster the hills are:

The area contains the geographic centre of Great Britain which has been measured as lying close to the Whitendale Hanging Stones, around four miles north of Dunsop Bridge.

The Bowland Challenge is an annual event in which teams of walkers navigate around a series of grid references over a ten-hour period. Proceeds of the event go to support the Bowland Pennine Mountain Rescue Team.[3]

Much of Bowland is designated by the government as an "area of outstanding natural beauty", and of that area, 13% is further designated a "Site of Special Scientific Interest" for its important areas of heather moorland and blanket bog. The AONB extends beyond Bowland itself into adjoining areas including parts of Lancashire such as Pendle Hill near Clitheroe.

The area is nationally and internationally important for its upland bird populations, and the hen harrier has been adopted as the symbol of the area of outstanding natural beauty. Furthermore, within the same area are over 500 listed buildings and 18 scheduled monuments.

The origins of the name Bowland appear to be form the Old Norse, buu-, meaning "farmstead", though others have argued for the Old English or Old Norse boga, meaning in both tongues a "bow" or bend in a river, to describe the topography of the Hodder basin, with its characteristic meandering river and streams. 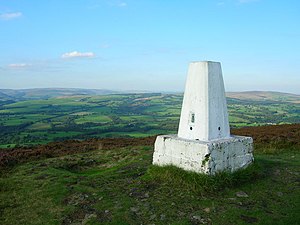 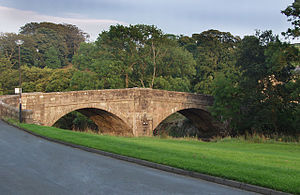 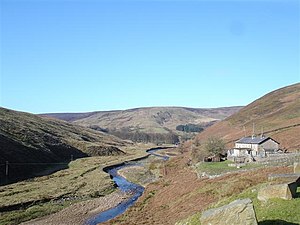 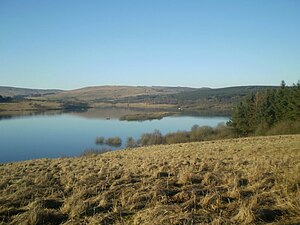 At the time of the Norman Conquest, Bowland was held by Tostig, Earl of Northumbria and brother of King Harold II. However, as feudal entities, the Forest and Liberty of Bowland were created by King William II at some time after the Domesday Book and granted to his vassal Roger de Poitou, possibly to reward Poitou for his role in defeating the Scots army of Malcolm III in 1091-92.

By the end of the 11th century, the Forest and Liberty came into the possession of the De Lacys, Lords of Pontefract. In 1102, along with the grant of the adjacent fee of Clitheroe and further holdings in Hornby and Amounderness, they came to form the basis of what became known as the Honour of Clitheroe.

By the late 13th century, Bowland was a Royal Forest. and a Liberty of ten manors spanning eight townships and four parishes and covered an area of almost 300 square miles on the borders of Lancashire and Yorkshire.[4]

In 1661, the 28 manors contained within the former Honour of Clitheroe, including the Forest and Liberty of Bowland, were granted by King Charles II to General George Monck as part of the creation of the Dukedom of Albermarle in gratitude for Monck's leading role in the restoration of the King.[5] The Lordship of Bowland then descended through the Montagu, Buccleuch and Towneley families.

Bowbearers of the Forest of Bowland have been appointed since the 12th century. A Bowbearer was originally a noble who acted as ceremonial attendant to the Lord of Bowland, latterly the king, by bearing (carrying) his hunting bow, but over the centuries the Bowbearer's role underwent many changes. At an early date, the Bowbearer was a “forester in fee”, holding his own feudal lands within the forest. The first record of such a Bowbearer, Uchtred de Bolton, dates from sometimes after 1157 (claims for an earlier holder of the office, Edwin, Comes de Bolton, in the late 11th century cannot be substantiated). At this time, the office covered the Forests of Bowland and Gilsland in Cumberland.[6] The Boltons were Bowbearers across five generations until 1311 when the Forest of Bowland was inherited by Thomas, 2nd Earl of Lancaster as the result of a marriage settlement.

While the Bowbearer retained his forest fee well into the 16th century, he became subordinate to a Master Forester appointed by the Crown and his responsibilities grew nearer to those of a chief verderer – an unpaid official appointed to protect vert and venison and responsible for supervising and assisting in the enforcement of forest laws.[7] Perhaps the most notorious Bowbearer during this period was Nicholas Tempest, executed at Tyburn in 1537 as one of the northern leaders of the Pilgrimage of Grace, the Romanist uprising against King Henry VIII.[8]

By the second half of the 17th century, two Bowbearers were being appointed as officers of the Bowland Forest courts.[9] Over the course of the next three decades, as the last remnants of the ancient forest vanished, the office of Bowbearer was reduced to little more than an Honourific.[10] The Parker family of Browsholme Hall today claim to be "hereditary Bowbearers of Bowland"[11] but this claim cannot be supported by the historical evidence. While the Parkers certainly served as Bowbearers over a number of generations up until 1858, they were always subject to grants made by the Lord of Bowland and hold no hereditary right. This became apparent in April 2010 when it was reported that the 16th Lord of Bowland had revived the office of Bowbearer and appointed Robert Parker the first Bowbearer of the Forest in almost 150 years.[12]

The Forest of Bowland had its own forest courts – woodmote and swainmote – from early times. These appear to have been abandoned in the 1830s around the time of Peregrine Towneley’s acquisition of the Bowland Forest Estate. The halmote court at Slaidburn was disbanded following the abolition of copyhold in 1922. General forest law in Britain was finally repealed by statute in 1971, more than 900 years after its introduction by the Normans. The original Bowland Forest courts appear to have been held at Hall Hill near Radholme Laund before moving to Whitewell at some time in the 14th century.

A chapel dedicated to St Hubert, the patron saint of hunting, is found in Dunsop Bridge, and in the Middle Ages Hubert was also considered the patron saint of Bowland.[13] The chapel was founded by Richard Eastwood of Thorneyholme, land agent to the Towneley family. Eastwood was the last known Bowbearer of the Forest of Bowland. An acclaimed breeder of racehorses and shorthorn cattle, he died in 1871 and is buried at St Hubert's.