Llangolman is a village and ancient parish on the southern flank of the Preseli Hills in Pembrokeshire. It forms part of the civil community of Mynachlog-ddu. There are prehistoric remains nearby and the parish has a history of slate and clay quarrying.

Llangolman lies in a historic landscape near the upper part of the valley of the Eastern Cleddau and its tributaries. The village place name derives from the church dedicated to St Colman. Colman is attributed to Colmán of Dromore, a 6th-century saint.[1][2]

Llangolman church stands on high ground just to the south of the main village. The current building is Victorian or early Victorian with little to show of the original mediæval building that once stood on the site. Of historical interest is the recording in the 19th century [3] of a stone gate post about 100 to 200 yards from the churchyard. This stone, known as the Maen-ar-Golman (the stone upon Golman) is about 7 ft tall with a number of cross markings carved on the stone. The stone appears to have no inscriptions. The local belief is that Golman is buried nearby.[4]

The earliest recorded tombstone in the graveyard is for Stephen Lewis from Llangolman with the date 1778.[5] 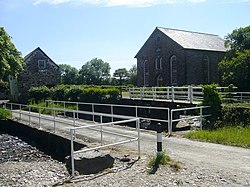 There are two local chapels in the area, Llandeilo and Rhydwilym. Rhydwilym (meaning 'William's Ford') is the oldest active Welsh Baptist Chapel in the world and was founded in 1668. Funds to build the first chapel were provided by the Gentleman Farmer John Evans of Llwyndwr in 1701. There was a chapel on the site in 1763 because a plaque on the front wall indicates that the 1763 chapel was rebuilt in 1841, and further enlarged in 1875.

The current Llandeilo chapel was built in 1882 though earlier Chapel structures are recorded in the immediate vicinity. The name Llandeilo comes from the local church dedicated to the 5th-century saint, Teilo.

Two gentry houses from the 18th century include Plas-y-Meibion and Llangolman Farm. There is also the house called Temple Druid (c1795) which was designed by John Nash, architect to King George IV, and is located roughly halfway between Llangolman and Maenclochog.

Llangolman Farm has some architectural interest.[6] Although most of the current house probably dates from the 18th century, the rear wing of the house has an older structure that includes barrel vaulting. There are two vaults one above the other. The lower vault covers the underlying cellar which has three rooms. The end room in the cellar and deepest includes a fresh water well. The first room, entered from an open arched doorway includes square holes in the vaulted ceiling that allowed butter to be easily dropped into the cellar for storage. Above the cellar vault is a second vaulted ceiling that currently houses the bathroom. The farm in the past was a center of production, including clay, slate, salted bacon, butter and a large mill for grinding corn.

The area surrounding the village is riddled with steep wooded valleys, presumably cut during one or more of the glacial episodes of the Pleistocen]. The village itself sits on a plateau where two valleys meet, the Eastern Cleddau and a tributary that originates near the small village of Llandelio. The underlying geology consists of interbedded Ordovician shales and sandstones with extensive slate outcrops. Evidence of glaciation is also seen from banks of gravel and sand situated to the east of the village which form deep drainage seeps from which discharges excellent spring water.

The springs emerge in boggy land at the base of the gravel banks where deposits of blue boulder clay, known by the natives as "indiarubber clay" [7] can also be found. Clay pits close to the farm houses of Llangolman Farm (still visible) and Llyn are evidence that the clay was extracted on a significant scale at some time in the past. The study by Jehu [7] mentions that the clay pit at Llyn was down to a depth of 15 to 20 feet and ladders were required to get in and out. His report goes on to state that the clay is bluish in color and very tough (hence the nickname indiarubber clay). The clay covers the valley bottom from Llyn to Llangolman Farm at a level of over 400 ft.

The valley sides have largely been saved from deforestation due to their steepness and some evidence of old forest exists along the western side of the Llandelio tributary. Otters have been seen in the rivers. Of historical interest is a surviving and working hydraulic ram that pumps water to the local farm called Ffynnon Sampson (which in translation means Samson's Well).

The current landscape within which the village sits is entirely rural. As such the bulk of income generated by the local economy is a combination of farming and tourism. Tourism includes both local bed and breakfast and rented cottages while the local farming industry is a combination of dairy, cattle and sheep. Of more interest and of historical importance is the slate quarrying industry. Geologically the area has a seam of Lakeland green slate running roughly east-west along the Taf Valley.[8] This slate is of volcanic ash origin and of Ordovician date. The slate is generally of a greenish-gray or light blue colour.[9] This slate was often used, in addition to roofing, for covering exposed walls to keep out moisture. Until the 1970s, the outer walls of Llangolman Farm were covered in hanging slates.

The slate itself was exploited at least as early as 1860[8] with the largest quarry being at Dandderwen (known as Whitland Abbey Slate after the name of the company which exploited it).[10] There is some suggestion that the Gilfach quarry may have been worked as early as the 16th century. It is also claimed that the slate used on the roof of the Houses of Parliament, when rebuilt in the 1830s, originated from the Gilfach quarry.[11] Much of the slate industry went into decline after the 1890s and by the 1930s most were closed due to competition from cheaper sources. Gilfach quarry on the eastern side of the Eastern Cleddau was still in operation until 1987.[12]

There are no schools in Llangolman village. Children from Llangolman would either go to Maenclochog about 2½ miles away or until 1964 they would walk to the slightly closer school at Nant y Cwm (1¾ miles away). Nant y Cwm closed in 1964 but reopened in 1979 as a Steiner School.[13]

A number of sites at Llangolman are recorded in the 1925 Inventory of Ancient Monuments.[5]

One of the most obvious sites still visible today is the Iron Age enclosure located to the south of the village between the farms Bryn Golman and Pencraig Fawr. The site, locally called the Gear (in the field called Gear Meadow) is an enclosure that has a roughly level interior with measurements c.200 ft E-W and 220 ft N-S. The bank down-slope side, stands up to 6 ft 6 in high externally and 10 inches internally. There appears to be a slight ditch on the north-east side. An entrance may be present that faces west.[14]

A second highly visible site is an enclosure called Castell Bleanllechog, located just to the west of the farm Pengawsai (itself located to the northwest of the village). It is not certain what the enclosure is but suggestions include a mediæval castle site, a mediæval homestead or even an older Iron Age defensive site. What is particularly noticeable are the massive ramparts which stand 10 ft 10 in high. Internally the height is less at about 5 ft. Traces of a ditch of one to two feet can be found to the west and south.[14] This enclosure is particularly noticeable on the aerial views from Google Maps.