Fermoy is a town on the River Blackwater in east County Cork. As of the 2016 census, the town and environs had a population of approximately 6,500 people. It is within the Barony of Condons and Clangibbon.

The town's name comes from the Irish and refers to a Cistercian abbey founded in the 13th century. It is from the Irish Mainistir Fhear Maí, meaning 'Monastery of the Men of the Plain'.

The ringfort at Carntierna up on Corrin Hill, a mile and a half south of Fermoy, was an important Iron Age site.

A Cistercian abbey was founded in Fermoy in the 13th century. At the dissolution of the monasteries during the Tudor period, the abbey and its lands came into private hands, passed through such names as Sir Richard Grenville, Robert Boyle and William Forward.

In 1791, the lands around Fermoy were bought by a John Anderson, an entrepreneur who developed the roads and started the mail coach system in Ireland. He designed the town and the streets remain much the same as they were originally built. In 1984, some of his descendants, living in Australia, named a winery, Fermoy Estate, after the town he established. A plaque and bust in his honour were unveiled at the entrance to the town park in 2001. 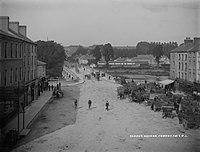 Fermoy was the site of Fermoy Barracks, a large British Army barracks. In 1797, when the army was looking to establish a new and permanent base, Anderson gave them the land as an inducement to locate in Fermoy, and Anderson and the town received economic benefit from the arrangement. In 1806 the first permanent barracks, the East Barracks, were built. They were located on 16½ acres of land, and provided accommodation for 112 officers and 1478 men of infantry, and 24 officers, 120 men, and 112 horses of cavalry. A general 130-bed military hospital was also built. In 1809, the West Barracks was built. This also had a 42-bed hospital. When both barracks were complete, there was accommodation for 14 field officers, 169 officers, 2,816 men, and 152 horses. By the 1830s, this was the largest military establishment on the island of Ireland. The town of Fermoy expanded around these facilities and retained its British military facilities until 1922, when the Irish Free State was first established.

During the Anglo-Irish War, Fermoy was the scene of the first attack for arms by the Irish Republican Army against British troops, during which a Private Jones was killed. This resulted in several reprisals, including when British troops looted and burned part of the town centre. One of those who led the raid, IRA Commandant Michael Fitzgerald, was subsequently captured but never tried for the offence. He later became the first IRA man to die on hunger strike during the rebellion. 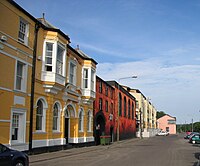 Industries in and around the town include chemical production (by Micro Bio), ice-cream manufacturing (by Silver Pail), and power product manufacturing (by Anderson Power). The town's industries also include electronics manufacturing and assembly by Sanmina-SCI Corporation, formerly Space Craft Incorporated.

Moorepark Research Institute, near Fermoy, is one of the Irish state's agricultural and food research institutes.

The Blackwater river is one of the town's major attractions and is popular for its salmon and coarse fishing. There is also a river-side walk amenity at Barnane.

Fermoy Rowing Club was founded in 1884, and it holds two annual regattas, usually in early May and early September. The first Fermoy Regatta was held in 1939.

Some aerial scenes from 1966 First World War film The Blue Max were filmed near Fermoy, with the nearby Blackwater viaduct featuring on screen.

In the 1980s, a coming-of-age film called 'Clash of the Ash' was shot in Fermoy.