From Wikishire
Jump to: navigation, search
For the river in Dorset, see River Wey, Dorset 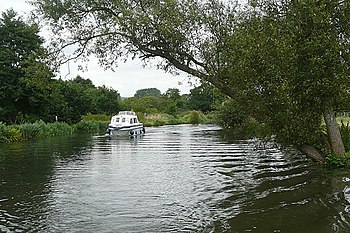 The Wey near Godalming

The River Wey is one of the two major rivers flowing within Surrey, both tributaries of the River Thames,the other being the River Mole. The Wey rises in two streams, in Hampshire and Sussex respectively, which grow broad before entering Surrey. The Wey flows through the midst of Surrey for the whole width of the county from south to north to the Thames at Weybridge.

The source of the Wey is in two separate branches which join at Tilford in Surrey. The source of the north branch is at Alton, Hampshire and of the south branch at both Black Down, Sussex south of Haslemere. The Wey has a total catchment area of 350 square miles, draining parts of Surrey, Hampshire and Sussex. It is partly navigable from Godalming, forming the natural part of the Wey and Godalming Navigations. It joins the River Thames near Weybridge, which is named after the river. The river is a popular subject of geographical study, as its features allow for easy access to data.

The 19½ mile towpath of the navigable section is open to walkers. 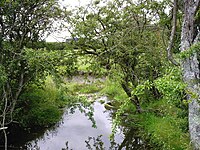 North branch near its source

The Wey North branch rises in Alton in Hampshire and runs eastwards through Upper Froyle and Bentley, turning southwards to enter Surrey at Farnham and on to Tilford.[1] The catchment of this branch was originally the upper catchment of the Blackwater, which then ran northwards through what is now Farnham. The Wey captured the Blackwater near Tilford; the capture extended downstream to Farnham, thus reversing the flow to southwards between Farnham and Tilford. The Blackwater remains as a much shorter river to the north of Farnham, with a wind gap (empty valley) between it and the Wey.

The Wey South branch rises in two shorter rivers leading from separate sources. One is at Black Down near Haslemere and runs through Liphook, Bramshott, Bordon, Lindford and Frensham to Tilford. The other rises at Inval, near Gibbet Hill, Hindhead. This joins the Blackdown-source south branch near Haslemere. Other smaller tributaries of the south branch are Cooper's Stream and the River Slea.[1]

The streams join at Tilford. From Tilford the river runs eastwards by Elstead and Eashing to Godalming, and there is already a noble stream, broad and navigable.

From Godalming, the River Wey heads north and forms a broad valley of green meadows, passing between Peasmarsh and Shalford to the county town, Guildford.

Guildford is built in the gap in the hills forced by the River Wey, and here the Wey forms the centrepiece of the town, at the bottom of the High Street, crossed by two bridges.

North of Guildford the Wey meanders through the farmland to Send and Old Woking, and hereabouts its course is one of countless wild loops, though for much of the way below Guildford the river's sweeps have been attenuated by manmade cuts and canals for the purpose of navigation.

Below Old Woking are the romantic ruins of Newark Abbey, now on an island between the old course, known as the Abbey Stream, and the river flowing in a cut.

From heer the river runs north more soberly to Pyrford, and at Pyrford Lock it parts company with the Navigation; the canal heads due north straight through Byfleet, while the Wey wriggles to the east of the town. Ultimately, they reunite at Weybridge, and shortly thereafter the Wey discharges its waters into the Thames.

The main naoteworthy tributaries after the Wey has been united at Tilford are: 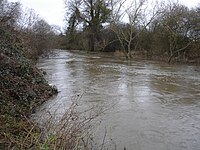 The Wey near Pyrford, where it is separate from the Canal

During the seventeenth century the river was made navigable to Guildford and extended in the eighteenth century to Godalming. The Basingstoke Canal and Wey and Arun Junction Canal were later connected to the river. The navigable sections are now owned by the National Trust.

The river has long been used as a source of power for mills, and many are recorded in the Domesday Book. At one point there were 22 mills on the river, and more on its tributaries. At various times they have been used for grinding grains, fulling wool, rolling oats, crushing cattle cake, leather dressing, papermaking and gunpowder manufacture. Willey Mill was still in use in 1953.[2]

There has been a mill on the site of Guildford Town Mill since at least 1649. From 1770, an additional water wheel was being used to pump water to the town reservoir on Pewley Down. This was replaced by two water turbines in 1896, then a single turbine in 1930, in use until 1952 when itself replaced by electric pumps nearby. In 2003, Guildford Borough Council arranged for the refurbishment and installation of an identical turbine as an example of renewable energy. Rather than pumping water, this turbine drives a generator to supply up to 260,000 kWh of electricity into the National Grid each year. The turbine came on-line in 2006.[3] (The 1930 turbine has since been preserved, and may be viewed at Dapdune Wharf).

Much of the upper reaches of the river is within the Surrey Hills Area of Outstanding Natural Beauty. The river passes through a variety of habitats including heathland, woodland and watermeadow, resulting in a broad diversity of wildlife. There are numerous Sites of Special Scientific Interest and Nature Reserves along the river. There are many angling clubs along the river, and healthy stocks of many species of fish including chub, barbel, roach, pike, bream, carp, perch and eels.