Shere is about 6 miles east of Guildford and 4 miles west of Dorking. It is a small and attractive village in the traditional English sense. It has a small central cluster of old village houses, shops (including a blacksmith), tea house, art gallery, two pubs and a church. There is also a museum which opens most afternoons at weekends and the former Victorian fire station of 1886 (Grade II Listed and one of the oldest in Surrey) has been converted into public conveniences.

The Tillingbourne runs through the centre of the village, a small brook adding to the charm of the village to no small extent. The attractiveness of the village makes it popular with visitors from the benighted suburbs, which keeps the village shops busy. 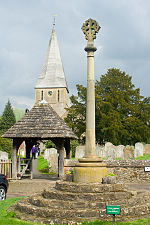 The parish church is dedicated to St James and stands in the heart of the village, with the Tillingbourne running at its foot. It is of great antiquarian interest. The church has Norman roots, maybe even Anglo-Saxon. It has ancient brasses, door and font. It is built of Bargate rubble, with ironstone rubble, flints, and miscellaneous materials, some probably derived from Roman buildings on Farley Heath, the dressings being of Bargate stone, firestone and clunch, and the south and west porches are of brick and timber.

The church also has a curious and cruel reminder of earlier days in its fabric: a squint which is the remnant of an anchoress's cell. An anchorite in the old, unreformed Church, was an extreme form of hermit, walled up in a small cell with just a gap to receive food and a squint to see the mass performed in the church. The famous anchoress of Shere was one Christine daughter of William 'called the Carpenter' in the 14th century.[2] Confined at her own request, she later changed her mind and escaped, only to be dragged back and walled in the for rest of her life. It is a cruel tale for such a pretty village.

Appearance in film and books