Cranleigh is a large village in Surrey, one of the many which proclaims itself the "largest village in England". It lies 8 miles south east of Godalming, to the east of the A281 which links Guildford with Horsham.

Until the mid-1860s, the village was called "Cranley". The Post Office succeeded in getting the spelling changed to avoid confusion with nearby Crawley in Sussex. The name is popularly supposed to come from the crane breeding grounds that were supposed to have been historically located at Vachery.[1] The figure of a crane adorns the old drinking water fountain of 1874, that can still be found in the middle of the village in 'Fountain Square'.

It sits partly on the Greensand Ridge, where it rises to 700 feet at Winterfold Hill, but mainly on the clay and sandstone Lower Weald.

Cranleigh has little of prehistoric or Roman interest though a spur of the Roman road between London and Chichester runs north-westward to Guildford past nearby Farley Heath in Farley Green, a temple site. Cranleigh was not mentioned in the Domesday Book, at that time being part of the manor of Shere.

The parish church of St Nicolas dates the first building on its site from around 1170, and the building was in its present form by the mid-14th century. It was extensively restored in 1847. The church has a gargoyle, situated on a pillar inside the church, which is said to have inspired Lewis Carroll, who lived in Guildford, to create the Cheshire Cat.[2] With the growth of the village, a "daughter" church, St Andrew's, opened at the west end of the village in 1900, but it was demolished in 1975. The parish is in the Diocese of Guildford.

Oliver Cromwell visited Knowle in 1657, his soldiers being billeted in houses in the village.[3]

Growth came due to improvements in transport; in 1813 the Wey and Arun Canal was authorised. It opened three years later, passing a few miles to the west of the village. This route linked London and the Wey) with Littlehampton (using the Arun). However, the canal traffic was completely eclipsed by the Horsham to Guildford railway which opened in 1865, and the canal fell into disuse. A turnpike road was also built between Guildford and Horsham, assent for the project being given in 1818. The opening is commemorated by an obelisk at the junction of the roads to Horsham and to Ewhurst. The Prince Regent used the route when travelling between Windsor and Brighton, the distances to which are given on the plaque on the obelisk.

Cranleigh railway station was closed by Dr Beeching in 1965 after almost exactly a hundred years of operation.[4]

Cranleigh possessed the first cottage hospital in the country founded by a local doctor in 1859. It has survived many attempts to close it, through fundraising by the local community. However it lost its beds for in-patients in May 2006.[5][6]

Stephen Rowland had a major role in the development of Cranleigh. He formed the Cranleigh Gas Company in 1876, and arranged for a mains water supply in 1886. In 1894 he laid out an estate between the Horsham and Ewhurst Roads, building New Park Road, Avenue Road, Mead Road, Mount Road and Bridge Road. He also ran a grocery store, His name is commemorated in that of Rowland Road.[7]

During Second World War, on 27 August 1944, the infant school was hit by a V-1 flying bomb and demolished. Fortunately this occurred early on a Sunday morning, and the school was empty. The only casualty was the Rector, who was in his garden not far away and was injured.[8] Another flying bomb hit the gasholder on the Common, destroying both the structure and a nearby cottage, whose occupant was killed.[9]

The cricket field has been used for that purpose since 1843.[11] Cranleigh Lawn Tennis Tournament was held there in August from 1922 until 1998, when it moved to the grounds of Cranleigh School.[12]

David Mann's department store opened in 1887 and is still in business.[7]

The distinctive row of maple trees which lines the High Street between the cricket field and the Rowland Road junction was planted in 1890, and not by Canadian servicemen in First World War as is widely believed.[13] 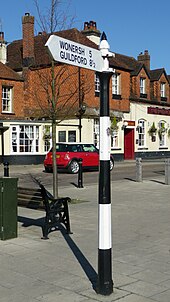 Despite losing the rail link, Cranleigh has prospered both as a satellite of Guildford, and as a service and light engineering centre in its own right. Furthermore, it is a retail centre for the surrounding smaller villages. The resident population of the area decreased by 2.0% in the ten years to 2001. In January 2007, Cranleigh Parish Council received a grant of arms.[14]

Cranleigh's high street has seen a rise in large corporate shops in recent years but it still also has a number of small, locally owned, traditional businesses such as a bakery owned by the Cornwell Family, a butcher and a fishmonger.

The Cranleigh Arts Centre runs a full programme of feature film screenings, live music, theatre productions, adult and children’s activities, exhibitions and workshops. Regular community arts projects and work with local schools are undertaken to reach and develop new audiences. The Centre is a registered charity and is run by a team of volunteers.[15]

The village has a public library and a recreation centre (which incorporates an indoor swimming pool).

Features of the village

This is a square near the centre of the village on the High Street, which is on the main road running through Cranleigh. Stocklund Square was constructed following the closing of the railway line in 1965, and the removal of the railway station.

A new supermarket was built in late 2004, with many other shops in the square. The square used to have greenery and a fountain, but this was replaced with a more open layout that now accommodates local attractions and events such as an Easter Service and a French Market. It is situated on the High Street.

In 2006, the pedestrian area surrounding the large stone drinking fountain monument (1874) at the centre of the village was re-modelled, and given the name 'Fountain Square'. New granite paving, brick planters and trees were introduced in a design which created a haven from traffic and a new focal point for community events. During the refurbishments the old "threepenny bit" bus shelter was moved to Snoxhall behind the leisure centre. The old "threepenny bit" bus shelter had been a popular shelter for the youths of Cranleigh to drink and smoke in. The shelter stood in its new location for only a few weeks before it was vandalised and completely pulled to the ground.