Locations in Wessex, from The Wessex of Thomas Hardy by Bertram Windle, 1902, based on correspondence with Hardy

Thomas Hardy's Wessex is the fictional landscape in which Thomas Hardy set his 'Wessex' novels, but which reflects the actual geography of Dorset, his home county, and some places around it. For the purpose of his novels, the places and the counties of the West Country took on a fictionalised set of names. The vast majority of places lay in 'South Wessex': his fictional version of Dorset.

The name 'Wessex' is taken from that of the ancient Kingdom of the West Saxons, which encompassed the West Country. The places that appear in his novels actually exist, but in many cases he gave the place a fictional name.[1] For example, Hardy's home town of Dorchester is called 'Casterbridge' in his books, notably in The Mayor of Casterbridge.[2][3] In an 1895 preface to the 1874 novel Far From the Madding Crowd he described Wessex as "a merely realistic dream country".[4]

The actual definition of "Hardy's Wessex" varied widely throughout Hardy's career, and was not definitively settled until after he retired from writing novels. When he created the concept of a fictional Wessex, it consisted merely of the small area of Dorset in which Hardy grew up; by the time he wrote Jude the Obscure, the boundaries had extended to include all of Dorset, Wiltshire, Somerset, Devon, Hampshire, much of Berkshire, and some of Oxfordshire, with its most north-easterly point being Oxford (renamed "Christminster" in the novel). Cornwall was also referred to but named "Off Wessex". The nature and significance of ideas of "Wessex" were developed over a long series of novels through a lengthy period of time. The idea of Wessex plays an important artistic role in Hardy's works (particularly his later novels), assisting the presentation of themes of progress, primitivism, sexuality, religion, nature and naturalism; however, this is complicated by the economic role Wessex played in Hardy's career. Considering himself primarily to be a poet, Hardy wrote novels mostly to earn money. Books that could be marketed under the Hardy brand of "Wessex novels" were particularly lucrative, which gave rise to a tendency to sentimentalised, picturesque, populist descriptions of Wessex – which, as a glance through most tourist giftshops in the south-west will reveal, remain popular with consumers today.

Hardy's resurrection of the name "Wessex" is largely responsible for the popular modern use of the term to describe the south-western shires, and many organisations take their name from Hardy to describe their relationship to the area.[5]

Map of the counties approximating to those of Hardy's Wessex

Hardy did not always use the historic boundaries in his writings, but he had particular counties in mind and many of the fictional places of his novels and his poems are thinly fictionalised versions of real towns and villages in Dorset and other counties.

Outer Wessex is sometimes referred to as Nether Wessex. 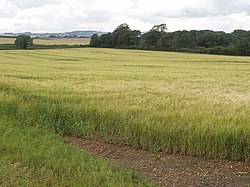 Key to references for the place-name table

The abbreviations for Thomas Hardy's novels that are used in the table are as follows:

Table of Wessex place-names, their actual places, and their appearance in Hardy's novels

In art and books

Artists such as Walter Tyndale, Edmund Hort New, Charles George Harper and others, have painted or drawn the landscapes, places and buildings described in Hardy's novels. Their work was used to illustrate books exploring the real-life countryside on which the fictional county of Wessex was based: