Southsea is a seaside resort located at the southern end of Portsea Island in Hampshire and effectively forming part of Portsmouth. Southsea is within a mile of Portsmouth's city centre. Southsea has a thriving commercial area which includes two national department stores and many other well-known high street chains. It combines these large stores with numerous independent traders which includes charity shops, food retailers and furniture/household goods shops.

Southsea also has a vibrant social scene with numerous bars and eateries which cater for a range of budgets and tastes.

In 1544 Henry VIII built the fort which became known as Southsea Castle. Although it would not have been called that at the time it is recorded as "Southsea Castle" in a map of 1724.

In 1809 a new suburb began to grow. It became known as Southsea after the castle. The first houses were built for skilled workers in the 'mineral' streets (Silver Street, Nickel Street etc.). These mineral streets were the most bombed areas of Portsmouth in the Second World War.

Around 1810 Hampshire Terrace, Landport Terrace, King’s Terrace, Jubilee Terrace and Bellevue Terrace were built adjacent to the town walls. Nowadays they form an almost continuous road between the City Centre and the beach.

Southsea remained small until 1835. The area between Castle Road and Victoria Road South was built up between 1835 and 1860 as housing for middle-class families. A prominent architect during this period was Thomas Ellis Owen who built properties in Kent Road, Queen’s Terrace, Sussex Terrace, Beach Road, Grove Road South, Clarendon Road, Osborne Road and Portland Terrace.

By the 1860s the suburb of Southsea had grown along Clarendon Road as far as Granada Road. In 1857 Southsea gained its own Improvement Commissioners responsible for paving, cleaning and lighting the streets.

After the 1870s, east of Victoria Road, there was new building in the Campbell Road / Outram Road area..

As building proceeded most was put up in the cramped manner typical of much of Portsmouth, a city where space is at a premium.

On 6 June 1994 a drumhead service was held on Southsea Common in front of the War Memorial to commemorate the 50th anniversary of D-Day. The service was attended by all the heads of the states which had participated in the allied landings, notably The Queen and the American President Bill Clinton. The service was also witnessed by over 100,000 members of the public. Historically, a blessing before battle was offered during a drumhead service which is conducted in the field with the drums forming the altar and the colours serving as the altar cloth.

In 15 September 2000 parts of Southsea were flooded when the pumping station which pumps surface water out to sea was itself flooded during a particularly heavy storm.

On 28 June 2005 Southsea Common was used as a venue for the Trafalgar 200 celebrations. Southsea seafront was an ideal point from which to witness the International Fleet Review and evening fire work display.

On 9 August 2011 a fire broke out at the old Joanna's nightclub, a derelict building situated opposite South Parade Pier. Police sectioned off most of the area and guests at the nearby Best Western Royal Beach Hotel were evacuated as a precaution.[1] Despite rumours circulating on social network sites, the incident was reportedly not linked to the riots taking place.

Much of Southsea was designed by the architect Thomas Ellis Owen. Although some of his buildings were destroyed in Second World War and some have since been unsympathetically modernised, his work still shapes the architecture of modern Southsea. The majority of Owen's Southsea is now protected by a number of Conservation Areas or by being Listed Buildings. Queens Hotel is a good example of the Edwardian baroque style, built in 1903. 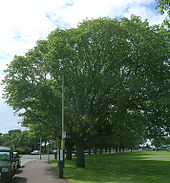 Southsea Common is a large expanse of mown grassland parallel to the shore from Clarence Pier to Southsea Castle. The Common owes its existence to the demands of the military in the early nineteenth century for a clear range of fire from the harbour defences at any enemy ships which dared to approach Portsmouth and its dockyard.

The Common is a popular recreation ground, and also serves as the venue for a number of annual events, including the Southsea Show, Para Spectacular, Military Vehicle Show, Kite Festival and a variety of circuses including the Moscow State Circus and Chinese State Circus. It was also the place where fans of Portsmouth F.C gathered to celebrate their victory in the 2008 FA Cup Final.

In August 2010, a life-size (52 ft high) model of an ultrasaurus dinosaur was erected on the common in conjunction with the local Aspex gallery.[2] The sculpture was destroyed by a fire, probably caused by an electrical fault, on 1 October.[3] 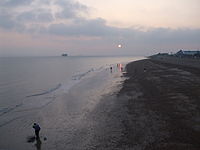 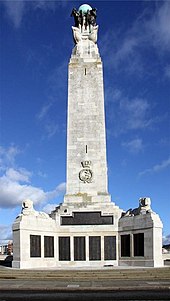 The Common is home to a remarkable collection of mature elm trees, believed to be the oldest and largest surviving in Hampshire, which have escaped Dutch elm disease owing to their isolation. The majority of the larger trees are Huntingdon Elms planted in the 1920s, but nearer the entrance to the Skate Park there is a fine example of a hybrid of the Siberian Elm Ulmus pumila. Huntingdon Elms once lined the Ladies' Mile avenue through the centre of the Common, but many were lost to the Great Storm of 1987 and replaced by the Dutch elm cultivar |'Lobel'.

The Ladies' Mile is also home to several semi-mature Canary Island Date Palms Phoenix canariensis. Planted in 1996, these palms are now some of the largest in the UK and for the last few years have fruited and produced viable seed, the first time this species of palm has been recorded doing so in the UK. Other palms growing close to the common include Trachycarpus fortunei, (Ladies Mile, Rock Gardens & Rose Garden), Chamaerops humilis (in front of the Pyramids Centre), Butia capitata (in Burguoyne Gardens) and Brahea armata, (Canoe Lake & D-Day Island). Many Cordyline australis are also planted in the area, though these are not true palms, but more closely related to Yuccas and Agaves.

A prominent sight out to sea is the four large forts created in the 1860s as part of an attempt to fortify the city against the threat of invasion. From the shore they look oval but are, in fact, round. They were part of defences which included land-based forts all around the city but as they were never used in action, they became known as Palmerston’s Follies, after the Prime Minister who initiated them.

To commemorate the millennium, a scenic walk was created extending to Gunwharf Quays from Southsea seafront. The route is marked on the pavement, and is lined by distinctive blue street lanterns.

There are a number of miniature golf courses, a skateboard park and public grass and clay tennis courts. During winter 2008 three beach volleyball courts were added to these attractions.

The D-Day museum (which holds the Overlord embroidery) is located on the seafront in Southsea, very close to Southsea castle.

At the end of Palmerston Road where it joins the Ladies Mile a plaque on a house records that it was once the home of Fred Jane, the creator of the standard naval reference book Jane’s Fighting Ships.

The Blue Reef Aquarium is also situated on the seafront.

Throughout the summer, there are regular open air concerts and events at the bandstand and on Castle Field.

Just off the seafront is Southsea Model Village[4] which is a 1/12 scale model village with forty miniature buildings, houses, forts, castles and a miniature railway. It was opened in 1956 on the site of a Victorian fort. Another part of the fort has been converted into Southsea Rose Garden.

Canoe Lake is the last remnant of an area of marsh and open water known as the Great Morass, drained in 1886, on which much of Southsea now sits. The lake is topped up from the sea by opening a sluice at high tide. Crabs and fish find their way in, and attract children fishing equipped with a piece of bacon on a string.

When undisturbed there are regularly swan and mallard, with less frequent visits from tufted duck, mediterranean gull, cormorant, little Grebe and occasionally a lone black swan. In summer pedalos can be rented on the lake.

Since 2006 Canoe Lake has been used as a venue for the annual Lake of Lights Memorial Service. This happens in December where thousands of lights are floated on the lake to commemorate loved ones in the local community who have been lost to cancer.[5]

Towards the eastern end of the seafront is the Royal Marines Museum. Based in the lavishly decorated former Officers' Mess of Eastney Barracks (built in the 1860s for the Royal Marine Artillery), the Museum includes The Making of the Royal Marines Commando exhibition, opened in 2008, and a refurbished Medal Room with over 8,000 medals earned by Royal Marines - including all 10 Victoria Crosses won by them.

The Kings Theatre, situated in Albert Road, is a venue that hosts a variety of performances, including productions by the local amateur group the Southsea Shakespeare Actors.

A recently created attraction has been the now annual "Love Albert Road Day" which is held along one of Southsea's main roads. The event features live music, street art and theatre, stalls, food from around the world, an outdoor cinema, competitions and skate demos. All the businesses from the road remain open for the day.

Hovertravel operate a regular hovercraft service to Ryde on the Isle of Wight which runs from Southsea seafront.

In 1898 a railway branch called the Southsea Railway was opened from Fratton Station, terminating at East Southsea Station (near to The Strand). Two unstaffed halts were added at Albert Road]] and Jessie Road/Devonshire Avenue]]. The line was not able to compete with the Portsmouth corporation tram services. It was closed in 1914 and never re-opened. The line itself and the station have since been demolished and replaced with houses; however it is possible to walk the approximate route. Southsea is now served by stations at Fratton and Portsmouth and Southsea station and on to Portsmouth Harbour (also called The Hard), with regular trains to London Waterloo.

There is currently a ferry service Hayling Island Ferry[6] linking Eastney and Ferry Point, on Hayling Island. Owing to minimal use, the service has to be subsidised by the local authorities, leaving it under constant threat of closure.

Southsea has traditionally offered many Bed and Breakfast establishments, also known as Guest Houses. In the early 21st century, many were sold off to developers who converted them to residential accommodation.