Stinsford is a village in south-western Dorset, a mile east of the county town, Dorchester. The wider parish includes the settlements of Higher Bockhampton and Lower Bockhampton, and all together ha a recorded population of 334 at the 2011 census.

The name Stinsford may derive from stynt, Old English for a limited area of pasture.[1]

The parish has five large country houses - Birkin House, Frome House, Kingston Maurward House, the Elizabethan Old Manor House and Stinsford House. Much of the land in the parish is occupied by Kingston Maurward College, a further education college.[2] 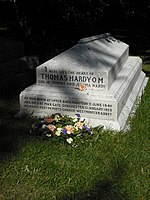 There has been worship at the site since at least Norman times at least, but the only remaining parts of the earliest structure are the sculpture of St Michael, inside the west wall of the south aisle, and the restored Purbeck Marble font.[3]

St Michael's was the local church of novelist and poet Thomas Hardy, who was born and lived much of his life at Higher Bockhampton within the parish. He was baptised at St Michael's. Stinsford is the original 'Mellstock' of Hardy's novels Under the Greenwood Tree and Jude the Obscure.

Hardy's heart is buried in the churchyard, alongside the grave of his first wife Emma Lavinia Gifford who died in 1912 and his second wife, Florence Dugdale. The churchyard also contains the grave of Poet Laureate Cecil Day-Lewis, who died in 1972 and had arranged for his burial to be close to Hardy whom he admired.[4] Also here are the remains of the actor and dramatist William O'Brien and his wife Lady Susan Fox-Strangways.[5]