Wantage is a market town in north-western Berkshire, about eight miles south-west of Abingdon and a similar distance west of Didcot. It lies within, and lends its name to, the Wantage Hundred of the county.

Wantage is most famous as the birthplace of King Alfred the Great and of his son, King Edward the Elder.

Wantage is the 'Alfredston' of Thomas Hardy's Jude the Obscure. It also appears as the setting of John Betjeman's book "Archie and the Strict Baptists", as Betjeman lived in Wantage from 1972 to 1984. Wantage has a memorial park named after him, which includes extracts from his poems in a peaceful wooded area.

The origin of the name of Wantage is uncertain, though it is clearly Old English and appears in that stage of the language as Waneting. It is generally thought to be from a phrase meaning "decreasing river".

Wantage stands at the foot of the Berkshire Downs escarpment in the Vale of White Horse, amidst prime horse racing country. There are gallops at Black Bushes and nearby villages with racing stables include Letcombe Bassett, East Hendred, Lockinge and Uffington. Wantage includes the suburbs of Belmont to the west and Charlton to the east. The Letcombe Brook flows through the town

Wantage parish stretches from the northern edge of its housing up onto the Downs in the south, covering Chain Hill, Edge Hill, Wantage Down, Furzewick Down and Lattin Down. The Edgehill Springs rise between Manor Road and Spike Lodge Farms and. Because of its central location in the Vale and proximity to the Downs, Wantage tends to be the main touring centre for the area and is home to the Vale and Downland Museum. There is a large market square containing the famous statue of King Alfred, surrounded by many shops with 18th century facades. Quieter streets radiate out from there, including towards the large Church of England parish church (see below).

Wantage is at the crossing of the B4507 valley road, the A417 road between Reading and Cirencester and the A338 road between Hungerford (and junction 14 of the M4 motorway) and Oxford.

The Wantage Tramway used to link the town with the Great Western Railway at Wantage Road. The former station building in Mill Street survives but little trace remains of the route. One of the tramway's locomotives, Shannon, alias Jane is preserved at Didcot Railway Centre. The former Wantage Road railway station was about three miles from the town, in nearby Grove to the north on the A338. A very small portion of the Wilts and Berks Canal is still within the parish. 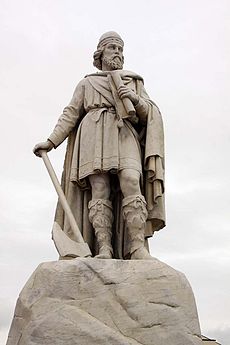 Statue of Alfred the Great, by Prince Victor of Hohenlohe-Langenburg

Wantage is believed to have been a small Roman settlement but it is known to history only from the days of King Alfred the Great, who was born here during the reign of his father, Æthelwulf, King of the West Saxons. King Alfred was born at the royal hall in Wantage in 849.[1]

Wantage appears in the Domesday Book of 1086 as Waneting. Its value was £61 and it was in the king's ownership until Richard I passed it to the Earl of Albemarle in 1190. Weekly trading rights were first granted to the town by Henry III in 1216. Markets are now held twice weekly on Wednesdays and Saturdays.

During the Civil War, Royalist troops were stationed in Wantage.

In the 19th century, Robert James Loyd-Lindsay, Baron Wantage of Lockinge became a notable local and national benefactor. He was very involved in founding the British Red Cross Society. In Wantage, in 1877 he paid for a marble statue of King Alfred by Count Gleichen to be erected in the market place, where it still stands today. He also donated the Victoria Cross Gallery to the town. This contained paintings by Louis William Desanges depicting deeds which led to the award of a number of Victoria Crosses, including his own gained during the Crimean War.

Since 1848, Wantage has been home to the Community of Saint Mary the Virgin, one of the largest communities of Anglican nuns in the world.

Wantage has been the site of a church since at least the 10th century and the present building of the Church of St Peter and Saint Paul dates from the 13th century, with many additions since. The church also contains seventeen fifteenth-century misericords.