Marnhull is a village in Dorset, in the Blackmore Vale, three miles north of the small town of Sturminster Newton. The resort towns of Weymouth and of Bournemouth (in Hampshire) and are approximately thirty miles to the south.

Marnhull is sited on a low ridge of Corallian limestone[1] above the valley of the River Stour, which forms the northern and western boundaries of the parish. In the 2011 census the parish had 962 dwellings, 905 households and a population of 1,998.

Marnhull consists of several conjoined hamlets, connected by a network of minor roads. The village presents a mix of architectural styles, with post-war developments existing alongside properties dating back to Tudor times and earlier. It has three churches (Church of England, Methodist and Roman Catholic), two primary schools, two public houses, a GP surgery, a village hall and a recreation ground, as well as various small shops and services.

The parish church, St Gregory, has a 15th-century tower which is a landmark and has been described as "the finest in the Vale."[2]

Saxon charters show that Marnhull existed as a village in the 10th century,[3] although the village's site has seen occupation as early as the Iron Age,[3] and a Roman settlement was established at Ashley Wood in the east of the parish.

The Domesday Book of 1086 does not mention Marnhull by name, though the constituent settlements of Walton Elm, Burton and Kentleworth were probably recorded under the entry for Sturminster Newton as the eight hides of land owned by Waleran, Roger and Chetel.[4]

Catherine Parr, the last of King Henry VIII's wives, was given the original manor of Nash Court in 1544. From her it passed to Edward VI and then to Elizabeth I after which it passed through the families of several prominent men.

Until 1763, Marnhull was the site of an annual bull-baiting event, taking place every 3 May. The event was stopped as a response to the violence and bloodshed it engendered, not just in Marnhull but also in surrounding villages.[5] 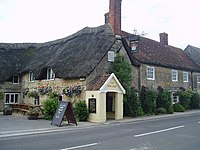 Thomas Hardy fictionalised Marnhull as 'Marlott' in his novel Tess of the d'Urbervilles. The Crown Inn is described by Hardy as 'The Pure Drop Inn', and The Blackmore Vale Inn is described as 'Rollivers' - a disreputable and illegal drinking house, where secret ale drinking groups gathered upstairs.

The television adaptation of the book was filmed in the village.