Bridport is a market town in Dorset. Located near the coast at the western end of Chesil Beach, where the River Brit is joined by the Asker and Simene. It stands on the world heritage "Jurassic Coast" and Chesil Beach. The loose clay cliffs in the area are abundant with fossils making the area popular with fossil hunters.

The town is famous for its rope-making, which was once its major industry. From its reputation came the expression "stabbed with a Bridport dagger", which to say "hanged"; the hangman's rope being made at Bridport.

Bridport once throve too as a fishing port. The port is no longer in existence although the harbour at West Bay is a mile away.

The town attracts a large numbers of second home owners. 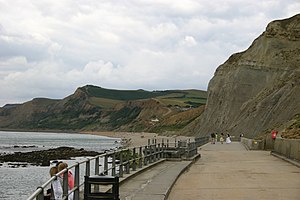 West Bay is Bridport's small fishing harbour, a mile and a half from the town centre. It was known as Bridport Harbour until the arrival of the railway, when it received its current name to be more attractive to potential holiday-makers. (West Bay is most in the public consciousness as the scene for the opening shot of The Fall and Rise of Reginald Perrin.)

West Bay is at the mouth of the River Brit. Today it has a fairly small harbour, two piers and two beaches. The east beach is part of the Chesil Beach.

West Bay and Chesil Beach make up part of the Jurassic Coast, which has been declared a World Heritage Site and which title is much vaunted locally since it was conferred by UNESCO.

Records of West Bay's harbour history somewhat predate the visits of international bureaucrats though. As Bridport Harbour it can be traced back to the 13th century when sluices were constructed across the mouth of the River Brit to form a navigable entrance.

The Great Western Railway reached Bridport in 1857, resulting in the decline of Bridport Harbour and resulted in its being renamed as "West Bay", a name more attractive to holidaymakers. 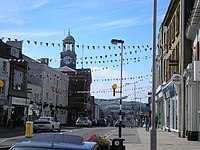 Bridport has an arts centre, cinema, library and museum. The museum, located in South Street, includes an extensive exhibition of the town's long history of rope-making.

The Bridport Art Scene has now gained a national profile, and over 100 artists now participate in the main Bridport Open Studios event that takes place over the three days of the August Bank Holiday weekend. The popularity of the event has led to three more open events in November, Easter and May. The biggest artist led venue is the St Michael's Studio complex on the St Michael's Trading Estate. It provides studios for 25 artists and attracted over 700 visitors to the 2009 Bridport Open Studios event.

The Bridport Round Table organises the West Bay Wallow[2] which takes place on Boxing Day. Anyone can participate in the swim which raises money for good causes. Many take the plunge in fancy dress and generally don't stay in the water for more than 10 minutes.

The Food Festival is held in late June at Asker Meadow. It showcases local produced foods of which the area is well known for. The Beer Festival is also held in the same field which is run by the Bridport Round Table and opens till late.

The raft race, organised by the RNLI, is held in July in the River Brit basin at West Bay. Participants build a 'floating vessel' and row it a few hundred yards up the River Brit before returning to the lake by the harbour sluice gates. The idea is to avoid sinking, capsizing or falling in.

The town holds its annual carnival on the third Saturday in August. The main feature is a carnival parade of floats, walking acts and majorettes. Other attractions on the day include carnival darts, carnival golf, a grand car boot sale, carnival fete and a fun fair. After the carnival South Street is closed for the night as live music is played while people dance in the street. Bridport's fun fair, which is situated on Asker Meadow, a local nature reserve is open late.

A torchlight procession takes place the following night where 1,500 torches are carried 2 miles from the town centre to a bonfire at West Bay. This is followed by live music and fireworks. West Bay's fun fair opens till late. The annual events raise money for local good causes and organisations.

On the Thursday before the August bank holiday weekend each year Bridport hosts the Melplash Show at the West Bay Showgrounds. One of Dorset's three biggest agricultural shows.