Fortuneswell is a village in Underhill on the Isle of Portland, in Dorset. It lies on steeply sloping land on the northern edge of the island, known as Underhill, where Chesil Beach, the tombolo which connects the island to the mainland, joins the island. Adjoining Fortuneswell and sharing the limited space on the northern slopes of the island are Chiswell to the west and Castletown to the north. Fortuneswell occupies the steepest land far above sea level, whereas Chiswell and Castletown occupy flat land close to sea level, next to Chesil Beach and Portland Harbour respectively. Fortuneswell has a main shopping street, and along with Easton, is the main hub of the Isle of Portland's activities.

As with the rest of Portland's settlements, Fortuneswell, including Maiden Well and Mallams, has been designated as a conservation area, to protect its special architectural and historic interest. Underhill, incorporating Fortuneswell and other settlements, was designated in 1976, with boundary extensions in 1997 and 2000.[1][2]

Fortuneswell was established around a natural watercourse and various springs.[3] It is likely that the Romans developed the village pond and wells. The main well was situated within the centre of the village.[2] The village name was first recorded as "Fortunes Well" in 1608, and evidence has suggested this originated from the belief in the occult star-telling power of its water, where one's luck could be seen.[4] Over the centuries the village was largely made up of open space, with high-quality houses spread out across the community.[5]

From the 1840s onwards Portland saw a large increase within its population, due to the construction of Portland Harbour's Breakwaters.[6] The housing demands placed upon the island saw the originality of Fortuneswell altered. A large number of terraces were erected across the village area, and were crammed into any available open space. The expansion continued into the 20th century, when the site of Tillycoombe Farm became a large housing estate too.[2] A new church was built between 1838 and 1840 at Fortuneswell, and was named St John's.[2] In 1865, Underhill became its own parish, with St John's becoming the parish church.[7] The influx of residents and visitors allowed Fortuneswell to flourish commercially, with many businesses becoming established there.[2] The 1896 Kelly's Directory lists 73 businesses within the village.[8]

Following World War II, it became clear new housing on Portland was needed, and this led to the construction of a large housing estate across Verne Common. The new estate, which began construction in 1949, was made a part of Fortuneswell. The original project suggested the construction of high-quality villas, however, prefabricated buildings were erected instead.[9] With the closure of the naval base in 1995, Fortuneswell has since seen an economic decline in business, though various independent stores continue to remain active to date. 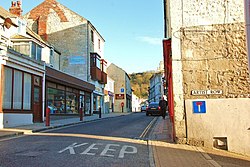 The one-way street through Fortuneswell.

Over the last few decades, many shops in Fortuneswell have changed hands frequently, while a few shops have lasted longer periods. The New Star Inn, Royal Portland Arms and the Britannia Inn are all pubs located in Fortuneswell.[10] The no longer remaining Regal Cinema was built in Fortuneswell during 1932. It later became a Bingo hall, and then the Rumours Nightclub in the 1990s. A victim of suspected arson, the nightclub caught fire one evening in 1992 and the remaining shell was demolished soon after.[11] Within the area of the old site of the cinema stands the Royal Manor Theatre.

A reminder of industry in the back streets of Fortuneswell is an old Victorian steam laundry, built in 1900, which later housed a Defence Industry Contractor.[12] In 1793 Robert Carr Brackenbury erected a small Methodist church within the village, known as Brackenbury's Chapel. It was later replaced by the Underhill Methodist Church of 1899.[13] Opposite the church is the Portland Council Offices, which were built in 1934, and possess a fine council chamber. 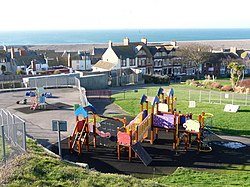 The play area of Victoria Gardens.

Located in Fortuneswell and close to the villages of Castletown and Chiswell is Victoria Gardens, which were opened in 1904 to mark the 1897 Diamond Jubilee of Queen Victoria.[14] Towards the highest point of Fortuneswell, heading towards Priory Corner, is Old Hill - a very steep footpath linking Underhill with Tophill. It was once a main route for those travelling from Tophill.[15]

Infant and primary education within the village became provided by Isle of Portland Aldridge Community Academy in 2012. The two schools within Fortuneswell, Brackenbury Infant School (including the Community Nursery) and Underhill Community Junior School, both closed in 2014, along with other schools on the island, all to be replaced by a new school situated at Southwell Business Park in 2016. Fortuneswell was also home to Brackenbury Day School, which is now the Brackenbury Centre.[16]

Queen Anne House at the top of Fortuneswell, was built circa 1720 by architect and quarry merchant Thomas Gilbert, The house, along with its boundary wall and gate piers became Grade-II* Listed in May 1993.[24] Another particularly grand house is The Captain's House, located at the bottom of Mallams. The house has been subject to local stories, as it stood in ruin for over one hundred years before being privately renovated in the late 1990s. It is a Grade-II listed building.[25][26] At Old Hill is the Old Rectory, which was originally the rectory to St. George Church. It later became a private hotel, and then three dwellings. It is Grade-II Listed.[27] Overlooking Victoria Gardens is a former police station. The station and its courtroom are dated 1904 and 1906, and became Grade-II Listed in May 1993.[28] The front boundary wall and steps to the station are also Grade-II Listed.[29] 1, 2 and 3 Castle Road, former police dwellings, are Grade-II Listed too.[30][31]