Cumnor is a village in northern Berkshire, 3½ miles west of the centre of Oxford and within the influence of that city's suburban growth. The parish of Cumnor includes Cumnor Hill, a ribbon development between Cumnor village and Botley), Chawley (at the top of Cumnor Hill), the Dean Court area on the edge of Botley and the outlying settlements of Chilswell, Filchampstead, Farmoor and Swinford.

The village is about 2 miles southwest of Botley and its centre is west of the A420 road to Swindon.

Cumnor has two public houses, the Vine and the Bear and Ragged Staff. It also has a newsagent, a butcher, a hairdresser and a post office / greengrocer.

The village has football and cricket clubs, both located on Appleton Road. Cutts End, a 'suburb' of Cumnor is also located along the Appleton Road.

There are three churches in Cumnor:

Cumnor was first mentioned in 931 as Cumanoran. The name is of Old English origin, and appears to be from Cuman ora': "Cuma's place".

In te Middle Ages, the parish was one of the largest in Berkshire, and included Wytham, Seacourt, North Hinksey, South Hinksey and Wootton.

In 1560 Cumnor Place was the scene of the death and suspected murder of Amy Robsart, the wife of Robert Dudley, 1st Earl of Leicester, and event which left Dudley disgraced and cast out of the Queen's favour. The house was pulled down in 1810, it is said because the Countess's ghost gave the locals so much trouble.

Cumnor is the basis for Lumsdon in Thomas Hardy's novel Jude The Obscure. 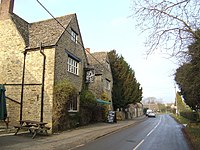