The Tarbat Ness Lighthouse stands at Tarbat Ness, the jutting headland at the is located at the north-west tip of the Tarbat Peninsula, near the fishing village of Portmahomack looking out on the open North Sea on the east coast of Great Britain. The ness and the light are in a detached part of Cromartyshire.

The lighthouse was built in 1830 by Robert Stevenson. It has an elevation of 174 feet and 203 steps climb to the top of the tower. 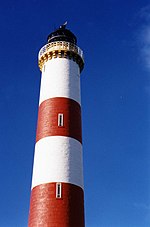 Close up view of the Lighthouse

A storm in the Moray Firth in November 1826 saw the loss of 16 vessels and brought many applications for lighthouses to be constructed at Tarbat Ness and at Covesea Skerries.

Tarbat Ness Lighthouse was engineered by Robert Stevenson for the Northern Lighthouse Board and the light was first exhibited on 26 January 1830. James Smith of Inverness was the contractor responsible for the building of the lighthouse which cost £9,361. The lighthouse tower is the third tallest in Scotland, behind only North Ronaldsay and Skerryvore, and is noted as a sea-mark for having two distinguishing broad red bands.

Bella Bathurst's 1999 'The Lighthouse Stevensons' refers to a rescue made by the principal keeper William Davidson of 4 of the 5 crew members of a Norwegian schooner. No date given for this. She mentions this in the context that Robert Stevenson required keepers to stay with the light and not risk rescuing shipwrecked people. It seems that even with the light ships could still be driven ashore. She accessed the full entries of logs and diaries available at the Northern Lights Board.

Earthquake shocks were sometimes reported and Tarbat Ness once shook so that the shades and lamp glasses rattled.

According to local tradition, the site of the lighthouse was once a Roman fort and later used for witches' covens. Tarbat Ness is also a place of special interest for the observation of migratory birds.[1]

Probably the lighthouse was built on the foundations of a Roman fortification,[2] that were later identified in the Middle Ages as a "Roman landmark" near Port a' Chait (now called "Port a Chaistell"). 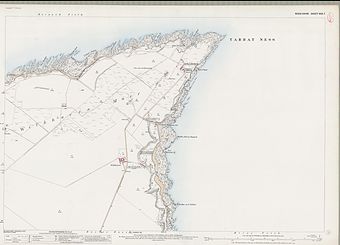 Old map of the Lighthouse showing the "Roman landmark" near Port a' Chait
Retrieved from "https://wikishire.co.uk/w/index.php?title=Tarbat_Ness_Lighthouse&oldid=67902"
Categories: