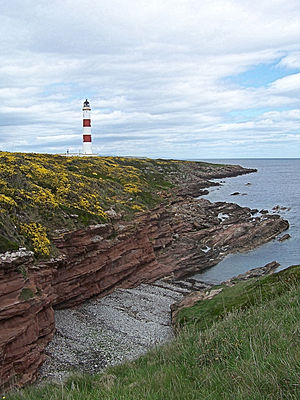 Tarbat Ness and its lighthouse

Tarbat Ness is headland that lies at the end of the Tarbat peninsula on the North Sea coast of Easter Ross, at the south of the entrance to the Dornoch Firth. The name of the headland is from the Gaelic tairbeart meaning "isthmus" and the Old Norse ness, meaning "headland".[1]

This is a detached part of Cromartyshire, the territory of that county encompassing the headland (with the hamlets of Wilkhaven and Bindal) and coming far south as Portmahomack, though excluding the sands of Port Uilleim. It forms the easternmost point of the county.

The Upper Old Red Sandstone Devonian period bedrock contains fish fossils. There are examples of a range of pitting, saltspray and honeycomb erosion and "some of the best examples of differential erosion processes on tilted sandstone strata in Scotland".[2][3]

The headland reaches 56 feet above sea level in the south and east and 35 feet in the north and west. The raised beaches provide evidence of the post-glacial changes in sea level. Water depths offshore reach 35 feet at 300 yards offshore and 65 feet at about three miles offshore.[3]

According to the Orkneyinga Saga the Earl of Orkney, Torf-Einarr "was the first man to dig peat for fuel, firewood being very scarce on the islands, at Tarbat Ness" (Torfness in the original).[4] This is said to explain his nickname, torf meaning "peat", but it is clearly an absurd assertion.[5]

At the Battle of Tarbat Ness in the 11th century, Thorfinn the Mighty defeated "Karl Hundason",[6] possibly a Viking name for Macbeth.

Further down the peninsula near the village of Portmahomack, in the 1480s the Clan Ross slaughtered a raiding party from the Clan Mackay by locking them in the Tarbat Old Church and setting fire to it. This event is known as the Battle of Tarbat.

On 14 October 1941 a Saro Lerwick flying boat assigned to No. 4 OTU L7268 crashed into the sea near Tarbat Ness following failure of the port engine. The aircraft could not maintain altitude on single engine. Six of the crew were killed, three recovered alive.[7]

Tarbat Ness from the south across the Moray Firth

The Tarbat Ness Lighthouse stands at the northwest tip of the peninsula. It was built in 1830 by Robert Stevenson and has an elevation of 174 feet and 203 steps to the top of the tower.[8]

The restored Ballone Castle lies at the south east end of the peninsula north of the village of Rockfield.